EIF4G1 and RAN as Possible Drivers for Malignant Pleural Mesothelioma

Background: Malignant pleural mesothelioma (MPM) is an aggressive malignancy associated to asbestos exposure. One of the most frequent genetic alteration in MPM patients is CDKN2A/ARF loss, leading to aberrant activation of the Rb pathway. In MPM cells, we previously demonstrated the therapeutic efficacy of targeting this signaling with the CDK4/6 inhibitor palbociclib in combination with PI3K/mTOR inhibitors. Here, we investigated whether such combination may have an impact on cell energy metabolism. Methods: The study was performed in MPM cells of different histotypes; metabolic analyses were conducted by measuring GLUT-1 expression and glucose uptake/consumption, and by SeaHorse technologies. Results: MPM cell models differed for their ability to adapt to metabolic stress conditions, such as glucose starvation and hypoxia. Independently of these differences, combined treatments with palbociclib and PI3K/mTOR inhibitors inhibited cell proliferation more efficaciously than single agents. The drugs alone reduced glucose uptake/consumption as well as glycolysis, and their combination further enhanced these effects under both normoxic and hypoxic conditions. Moreover, the drug combinations significantly impaired mitochondrial respiration as compared with individual treatments. These metabolic effects were mediated by the concomitant inhibition of Rb/E2F/c-myc and PI3K/AKT/mTOR signaling. Conclusions: Dual blockade of glycolysis and respiration contributes to the anti-tumor efficacy of palbociclib-PI3K/mTOR inhibitors combination. View Full-Text
Keywords: malignant pleural mesothelioma; CDK4/6 inhibition; Palbociclib; PI3K/mTOR inhibitors; metabolism malignant pleural mesothelioma; CDK4/6 inhibition; Palbociclib; PI3K/mTOR inhibitors; metabolism
►▼ Show Figures 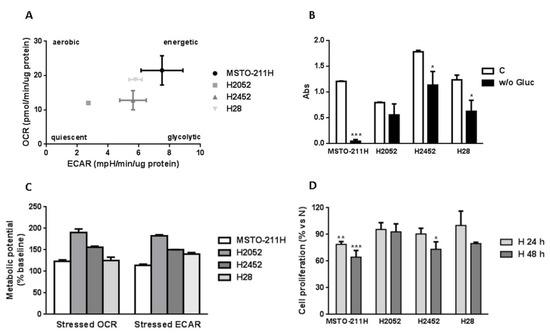