Vectorial transport of organic cations (OCs) in renal proximal tubules is mediated by sequential action of human OC transporter 2 (hOCT2) and human multidrug and toxic extrusion protein 1 and 2K (hMATE1 and hMATE2K), expressed in the basolateral (hOCT2) and luminal (hMATE1 and hMATE2K) plasma membranes, respectively. It is well known that hOCT2 activity is subjected to rapid regulation by several signaling pathways, suggesting that renal OC secretion may be acutely adapted to physiological requirements. Therefore, in this work, the acute regulation of hMATEs stably expressed in human embryonic kidney cells was characterized using the fluorescent substrate 4-(4-(dimethylamino)styryl)-N-methylpyridinium (ASP+) as a marker. A specific regulation of ASP+ transport by hMATE1 and hMATE2K measured in uptake and efflux configurations was observed. In the example of hMATE1 efflux reduction by inhibition of casein kinase II, it was also shown that this regulation is able to modify transcellular transport of ASP+ in Madin–Darby canine kidney II cells expressing hOCT2 and hMATE1 on the basolateral and apical membrane domains, respectively. The activity of hMATEs can be rapidly regulated by some intracellular pathways, which sometimes are common to those found for hOCTs. Interference with these pathways may be important to regulate renal secretion of OCs.
Keywords: organic cations; transport; kidneys; regulation organic cations; transport; kidneys; regulation

Kidneys are key players in the excretion of several substances of endogenous and exogenous origin. Besides by filtration in glomeruli, renal excretory function is sustained by secretion through the proximal tubules [1,2]. Tubular secretion is especially important for polar and charged molecules, which are subjected to a vectorial transport across proximal tubule cells by the orchestrated action of membrane transporters expressed either in the basolateral (facing blood) or apical (facing primary urine) membrane of the cells. In vectorial secretion processes, transporters expressed in the basolateral plasma membrane domain are responsible for the influx, whereas the ones expressed in the apical membrane domain are responsible for the efflux of substrates [3]. Tubular secretion is responsible for renal excretion of charged molecules, such as organic cations (OCs). Endogenous OCs are substances with important physiological function, such as serotonin and histamine, or are metabolism products, such as creatinine. A vast majority of exogenous OCs is represented by drugs such as metformin, verapamil, morphine, etc. [4,5].
The human organic cation transporter 2 (hOCT2) expressed in the basolateral membrane of proximal tubule cells mediates the first step of OC secretion, that is, the Na+- and H+-independent uptake of OCs [6,7] from the blood. The OC secretion into the urine is then accomplished by extrusion into the tubule lumen, a process that in humans is mediated mainly by human multidrug and toxin extrusion proteins 1 and 2K (hMATE1-2K) [8], pH-dependent transporters expressed in the apical membrane domain of proximal tubule cells [9,10,11,12,13]. This process is stimulated by the slightly acidic pH of primary urine. Substances that interact with hOCT2 can also interact with hMATEs [14,15,16], confirming that these transporters constitute a secretory axis for OCs in renal tubules. This transport vectorial system is involved also in the renal secretion of atypical substrates such as the chemotherapeutic drugs cisplatin and oxaliplatin. Since oxaliplatin is a better substrate of hMATE1 and hMATE2K than cisplatin, it is efficiently eliminated into the urine and causes less nephrotoxicity than cisplatin (Figure 1) [12,17,18].
It is well known that the activity of OCTs is subjected to specific acute regulation by several signaling pathways, which can elicit changes in transporter affinity or alter the number of transporters in the membrane [19]. However, information on regulation of MATEs is limited. The knowledge of specific regulation of transporters belonging to the same functional axis such as OCTs/MATEs is important, because such a regulation has the potential to modify the renal OC secretion, in this way changing body exposition to drugs and extent of nephrotoxicity. Therefore, in this work, the acute regulation of hMATEs has been comparatively investigated.

Both human embryonic kidney (HEK) 293 cell lines transfected with either hMATE1 or hMATE2K were able to transport 4-(4-dimethylaminostyril)-N-methylpyridinium (ASP+) in a concentration-dependent manner. Specific uptake was calculated by subtraction of unspecific uptake calculated in the presence of 1 mM cimetidine, a high affinity inhibitor of MATEs [20], from total ASP+ uptake. Transport reached saturation both in hMATE- and hMATE2K-HEK cells, allowing calculation of the kinetic parameters Vmax and Km, which were, respectively, 4.5 ± 0.7 arbitrary fluorescence units (a.u.) and 14.2 ± 5.0 μM for hMATE1, and 15.3 ± 0.6 a.u. and 6.6 ± 1.0 μM for hMATE2K (Figure 2a, Table 1). The hMATE2K showed a slightly higher affinity for ASP+ than hMATE1 in the uptake configuration. The Vmax values cannot be directly compared, since they also depend on transfection efficiency, which can be different for hMATE1 and hMATE2K, on the gain used in the measurements, and on performance of the fluorimeter lamp. Additionally, in the efflux configuration (Figure 2b), hMATE2K seemed to have a slightly higher affinity for ASP+ than hMATE1 (the Km values calculated for efflux are not shown, since they cannot be exactly calculated because not all the intracellular ASP+ is exchangeable; however the Km ratio for the efflux mediated by hMATE1/hMATE2K was 1.5, suggesting a higher affinity of hMATE2K than hMATE1 for ASP+ in the efflux configuration). Since not all the intracellular ASP+ is exchangeable, these values must be considered as an approximation and cannot be directly compared to the Km values measured in the uptake configuration.
The rapid regulatory abilities of various cellular signal messengers on ASP+ uptake by human MATE transporters are presented in Figure 3. Cells were incubated with each substance for 10 min, before measuring ASP+ uptake. For activation of protein kinase A (PKA) and protein kinase C (PKC), we used 1 µM forskolin and 1 µM 1,2-dioctanoyl-sn-glycerol (DOG), respectively. For inhibition of phosphatidylinositol 3-kinase (PI3K), of Ca2+/calmodulin (CaM), of p56lck tyrosine kinase (p56lck), and of casein kinase II (CKII), we used 0.1 µM wortmannin, 5 µM calmidazolium, 5 µM aminogenistein, and 10 µM 4,5,6,7-tetrabromo-1H-benzimidazole (TBBz), respectively. The regulatory substances were used in a concentration range, which has been described to be specific for activation/inhibition of distinct signaling pathways and which was already used in HEK293 cells to study acute regulation of OCTs [19,21,22,23,24,25,26,27].
The uptake mediated by hMATE1 seemed to be only slightly downregulated by CaM and p56lck inhibition (to −18 ± 2% and −15 ± 2% of controls, respectively). Interestingly, inhibition of CKII stimulated ASP+ uptake (+14 ± 4%). Uptake mediated by hMATE2K was strongly stimulated by p56lck and CKII inhibition (to +97 ± 5% and +281 ± 29% of controls, respectively). Other substances (forskolin, DOG, wortmannin) had no significant influence on hMATE-mediated ASP+ uptake.
Because of the huge regulatory effects of p56lck and CKII inhibition on ASP+ uptake by hMATE2K, we investigated whether this regulation was due to the activity of Na+/H+ exchanger 1 (NHE1), which is the main regulator of pH in HEK cells [28]. For this reason, ASP+ uptake regulation was measured in hMATE2K-HEK cells under inhibition of NHE1 by 1 µM cariporide, a concentration known to specifically inhibit NHE1 [29] (Figure 4).
Ten minutes of incubation with 1 µM cariporide increased ASP+ uptake by hMATE2K, probably because of efficient NHE1 inhibition and slight acidification of the cells, which stimulated ASP+ uptake. Inhibition of NHE1 with cariporide did not change the stimulation of ASP+ uptake by hMATE2K under p56lck or CKII inhibition. To study the effects of pH on regulation of ASP+ uptake by hMATE2K, we incubated the cells with NH4Cl to make the cellular pH more acidic (Figure S4). This maneuver strongly increased the ASP+ uptake by hMATE2K to 292 ± 14% (measured in at least three independent experiments) compared to control experiments, which were set to 100 ± 4% (not shown). Interestingly, under cell acidification, the stimulation of ASP+ uptake by hMATE2K observed under p56lck inhibition with aminogenistein disappeared, while the one produced by CKII inhibition with TBBz remained (Figure 5).

We further investigated whether ASP+ efflux mediated by hMATE1 or hMATE2K is also subjected to rapid regulation (Figure 6 and Figure 7). Figure 6 shows an example of hMATE2K efflux regulation experiments performed under PKC activation with DOG compared to control experiments. Figure 7 shows the summary of the results on efflux mediated by hMATE1 and hMATE2K obtained under modulation of several signaling pathways.
Since inhibition of CKII with TBBz seems to be able to regulate hMATE1 both in the uptake and in the efflux configuration, we tested whether this regulation can modulate the activity of the transport axis for OCs in Madin–Darby canine kidney (MDCK) II cells, a polarized cell system, where we expressed hOCT2 alone or together with hMATE1. The hMATE1 was transfected in MDCK II cells already stably expressing hOCT2-GFP. The cells were grown on filters (12 well Thin-cert, 1 µm transparent, Greiner Bio-One, Frickenhausen, Germany), allowing the separation of an apical and basolateral compartment. Expression of hOCT2 and hMATE1 was controlled by PCR and immunofluorescence analysis (Figures S7 and S8). The genetic manipulation of MDCK II cells resulted in the expression of hOCT2 and hMATE1 both at the mRNA and at the protein levels. Immunofluorescence labeling of hOCT2 and hMATE1 clearly showed that the two proteins were expressed in distinct cellular compartments, with hOCT2 mainly expressed in the basolateral and hMATE1 in the apical membrane domain. The cellular accumulation of ASP+ was compared between hOCT2-MDCK and hOCT2-hMATE1-MDCK cells after addition of the fluorescent substrate to the basolateral compartment in order to mimic the physiological direction of transport in the kidneys (Figure 8). By addition of ASP+ to the basolateral compartment, a higher intracellular ASP+ accumulation was observed in hOCT2- compared with hOCT2-hMATE1-MDCK-cells, indicating that the presence of hMATE1 increased the ASP+ efflux through the apical domain of the plasma membrane. Incubation with TBBz strongly increased the intracellular ASP+ content in hOCT2-hMATE1- compared with hOCT2-MDCK-cells, probably due to an inhibition of ASP+ efflux through the hMATE1, as observed in experiments with hMATE1-HEK293 cells (Figure 7).

As found for other SLC transporter families, hMATEs, members of the renal secretion pathway of organic cations, can be acutely regulated. Although hMATEs are highly similar in their structure and substrate affinities, they do have some differences for what concerns responses to cellular messengers. Preliminary results suggest that such a regulation is effective in systems expressing uptake and extrusion transporters.

This research was funded by the Deutsche Forschungsgemeinschaft, grant number 107/11.1 to G.C.

The authors declare no conflict of interest. The funders had no role in the design of the study; in the collection, analyses, or interpretation of data; in the writing of the manuscript; or in the decision to publish the results. 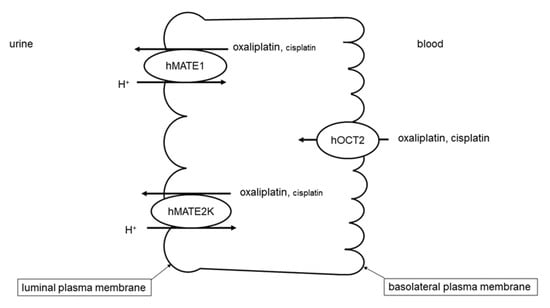 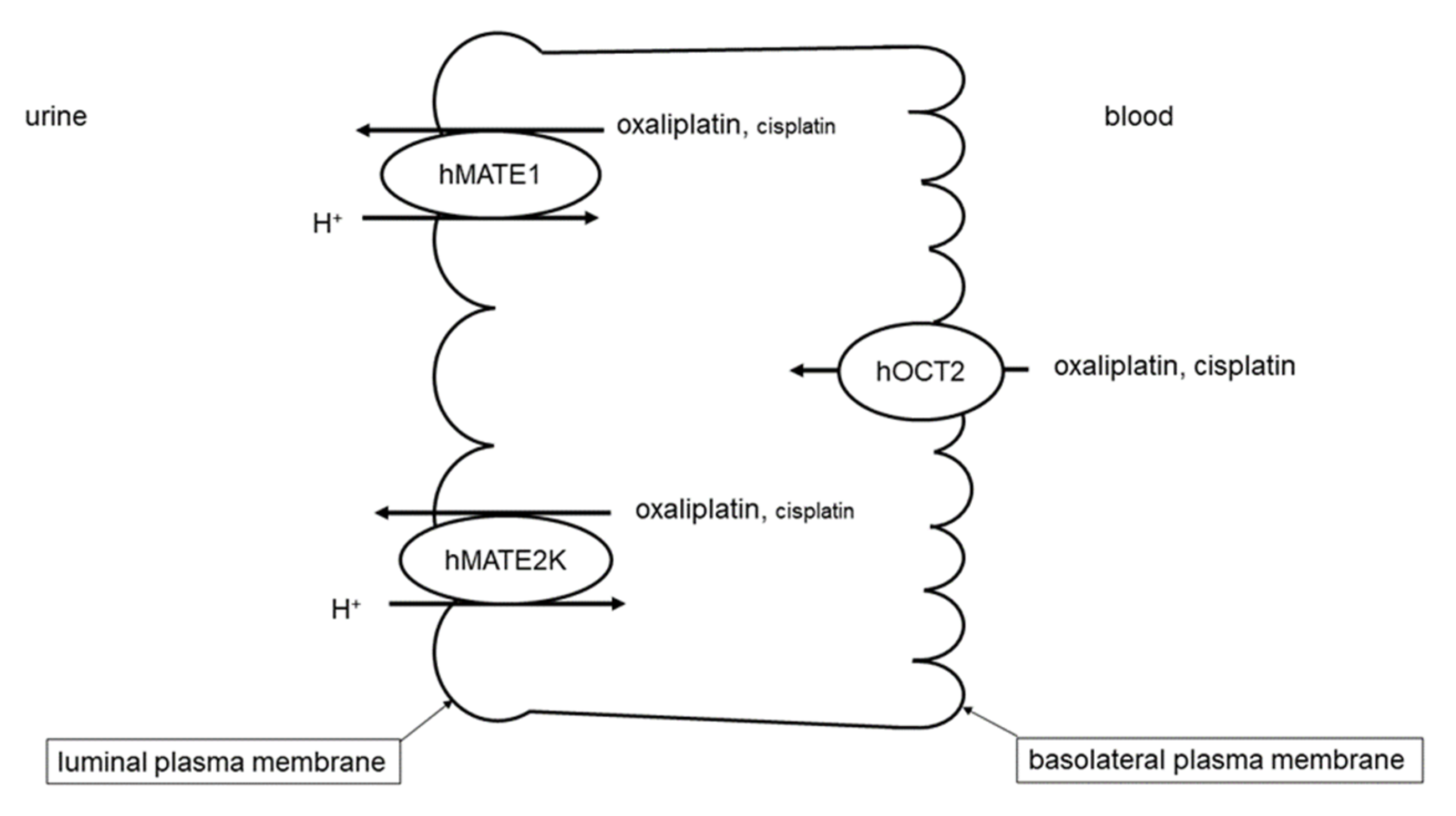 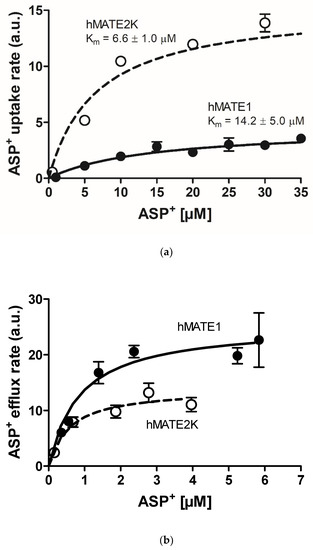 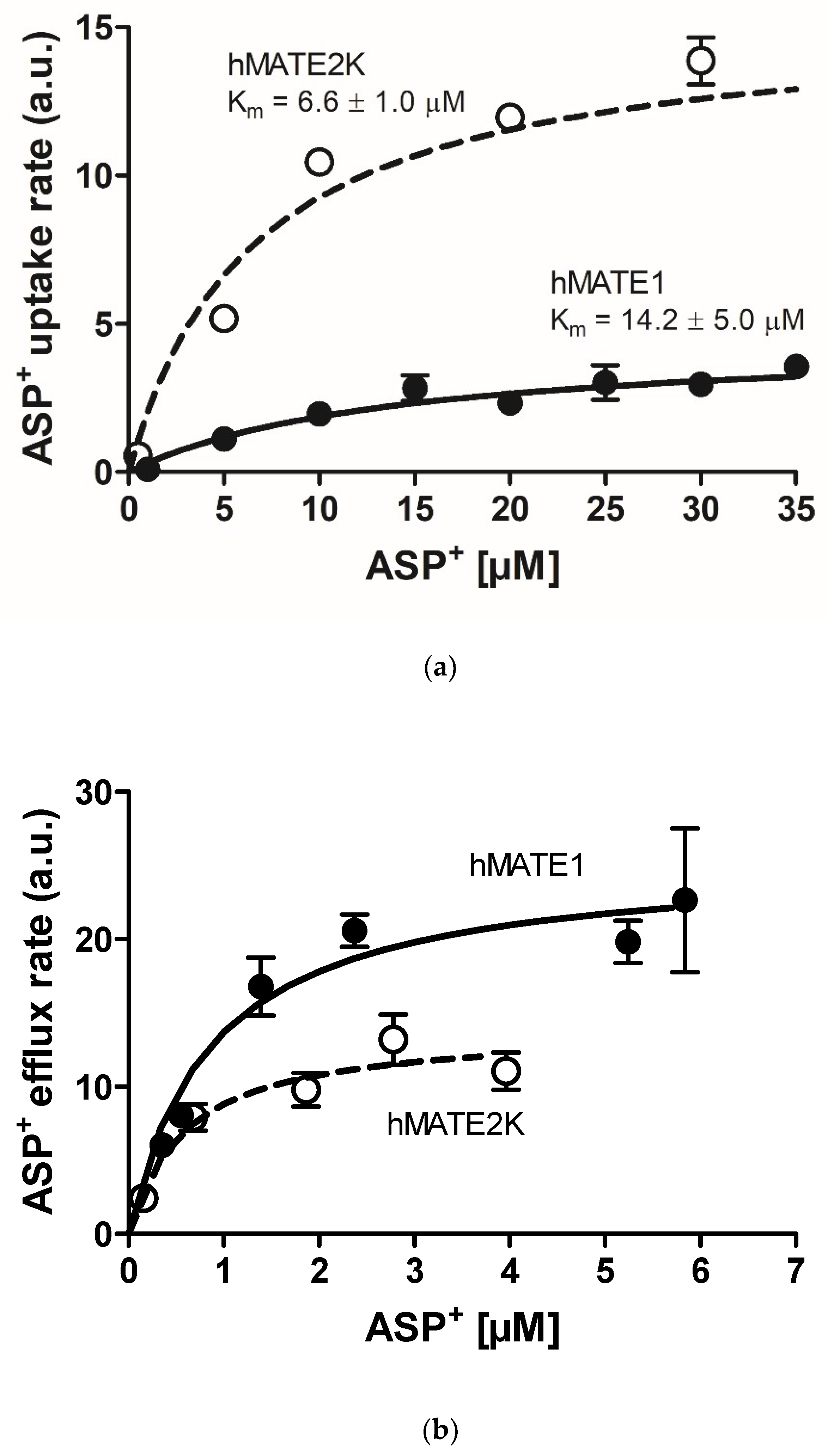 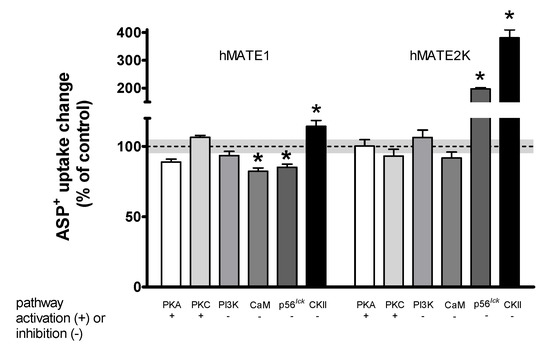 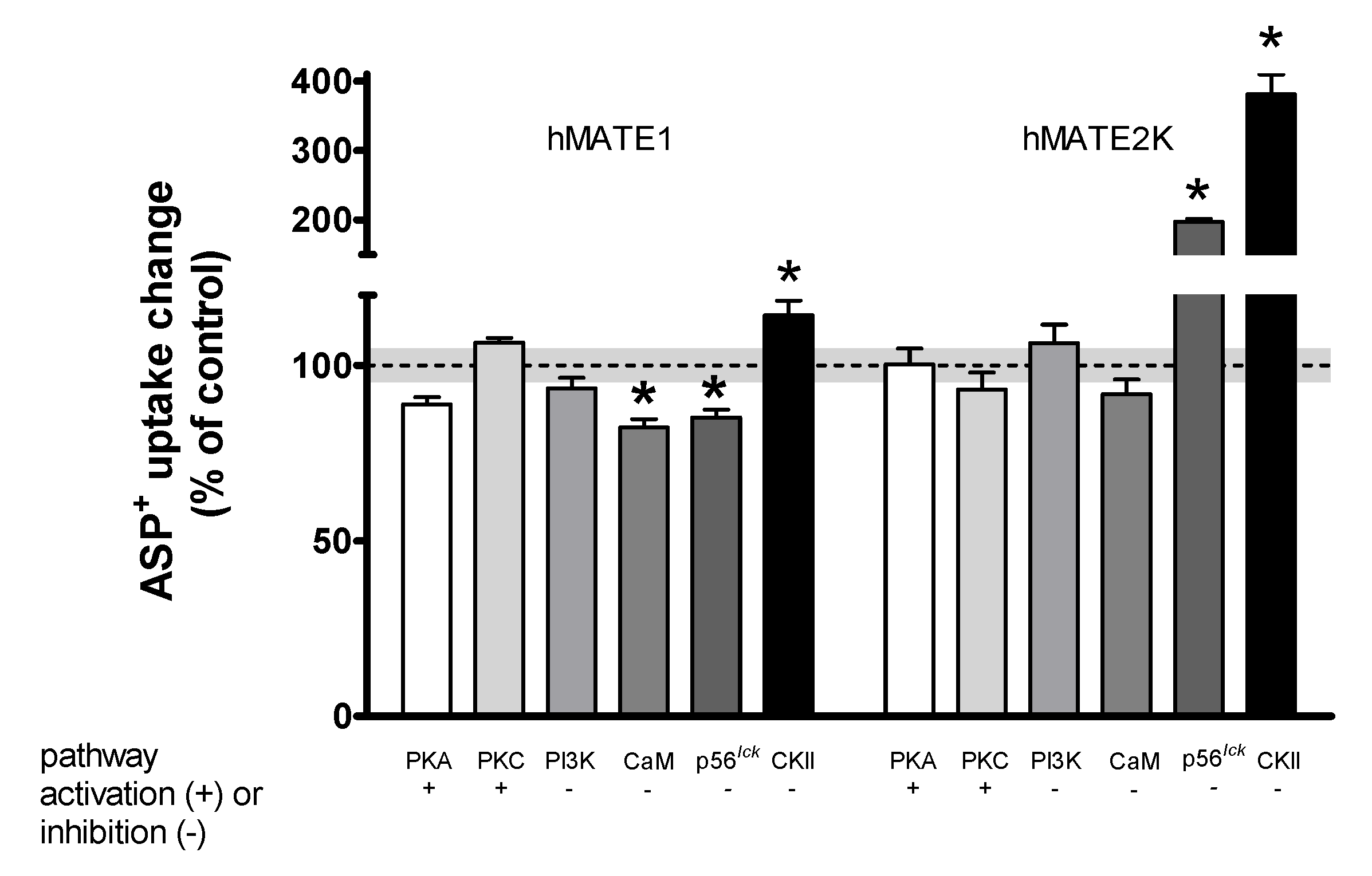 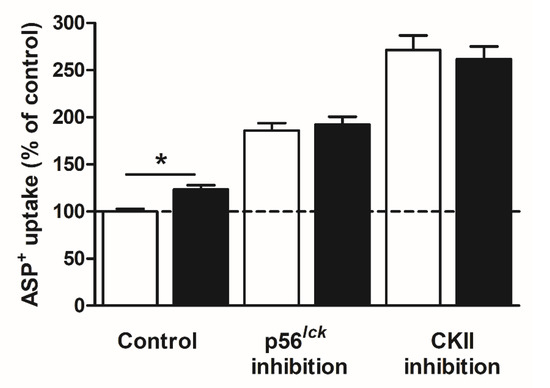 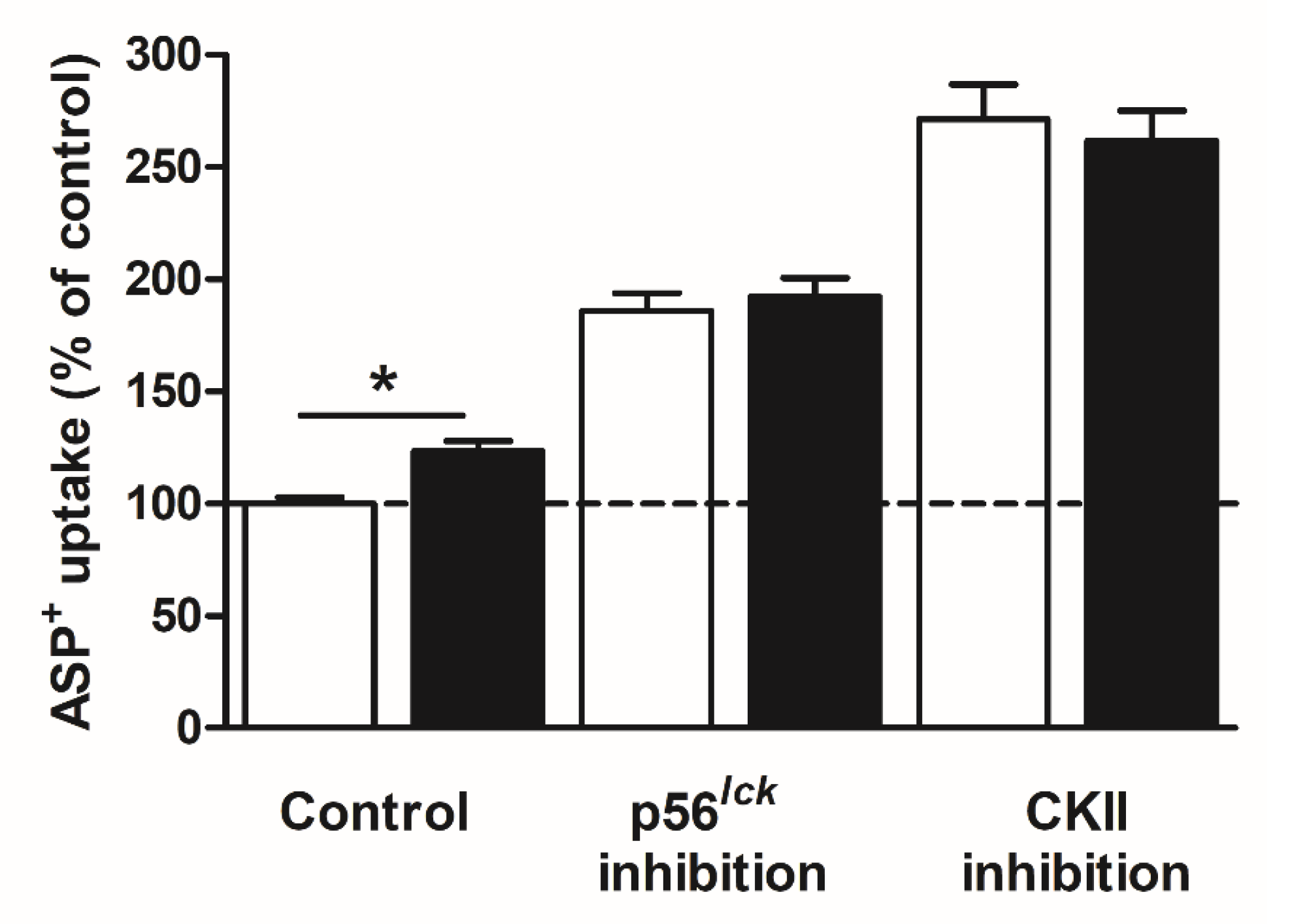 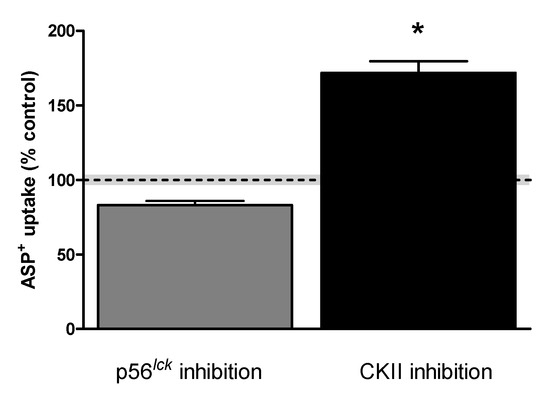 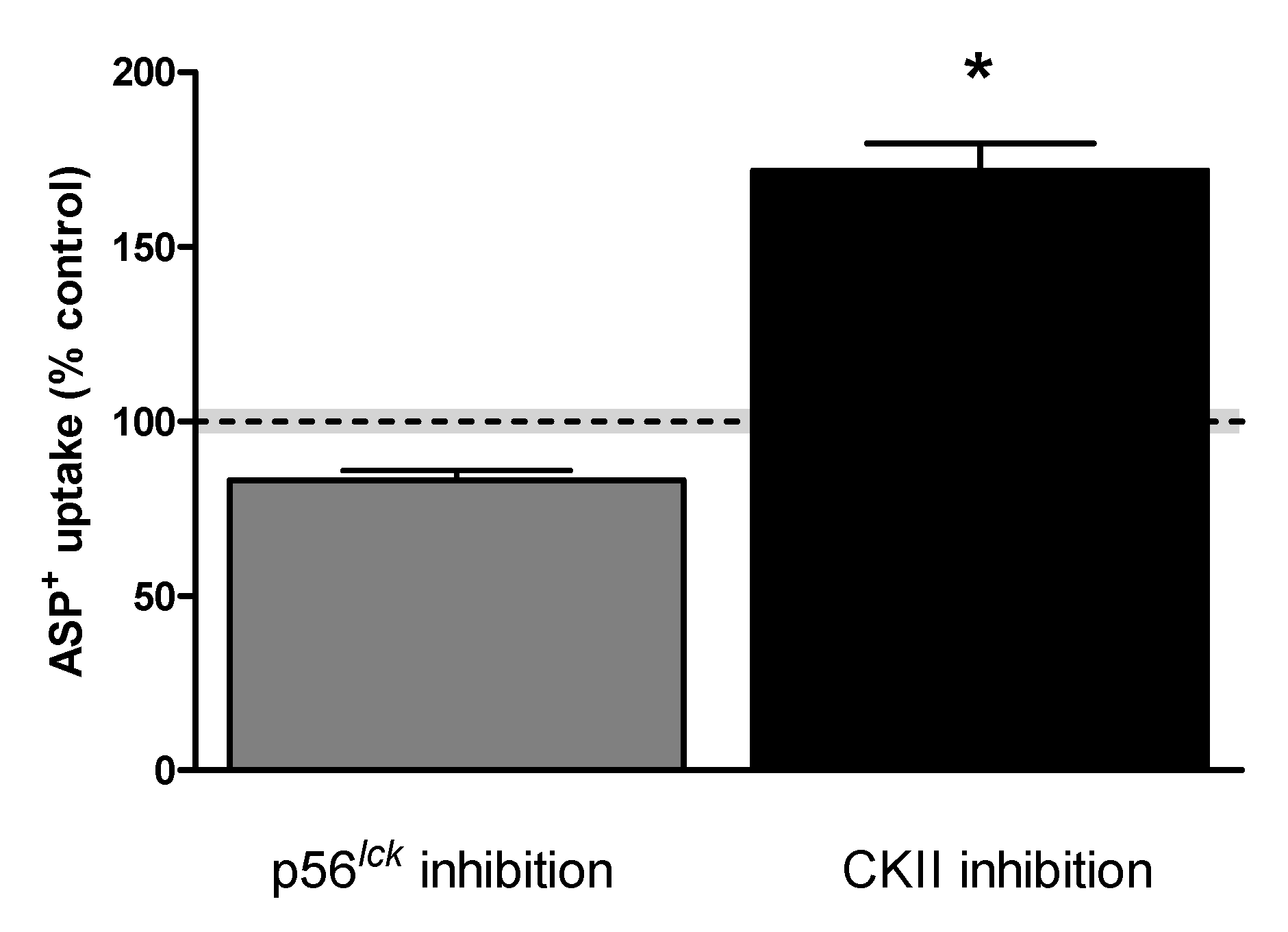 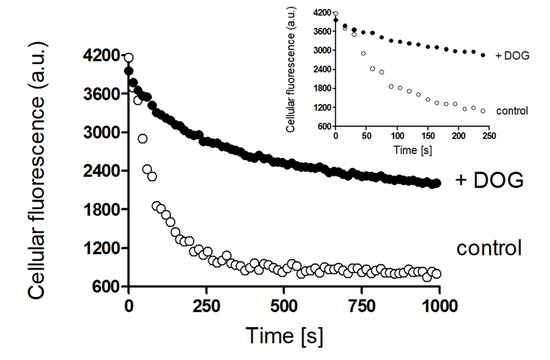 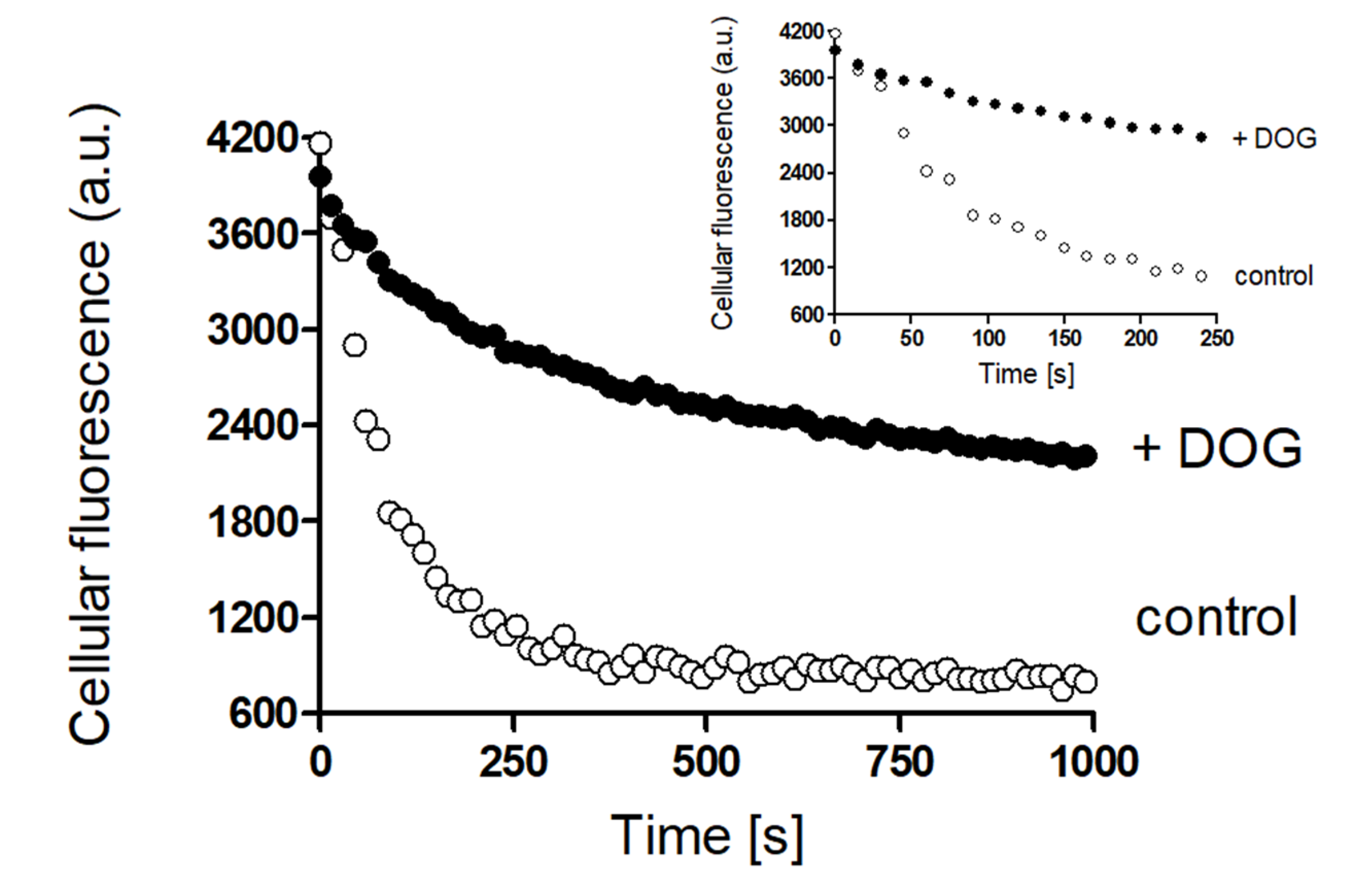 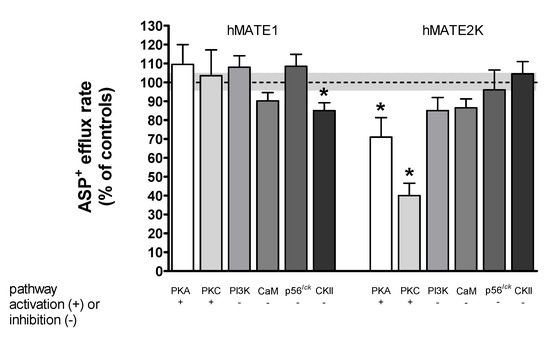 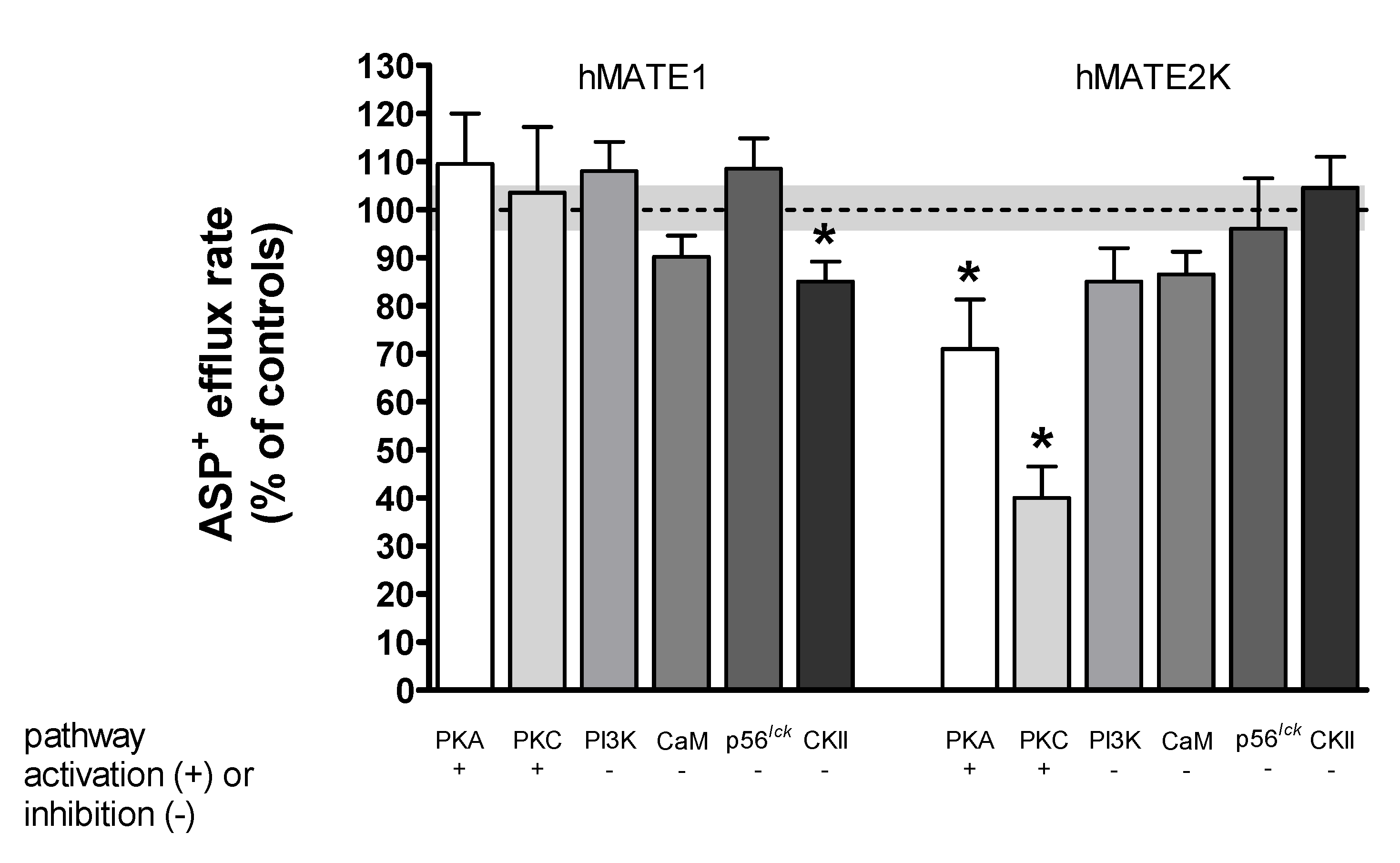 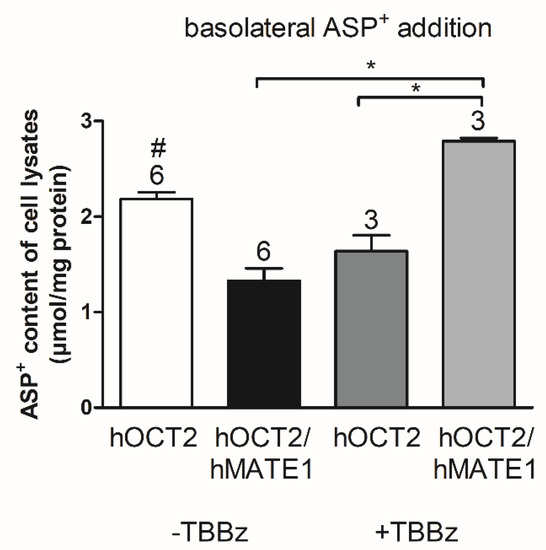 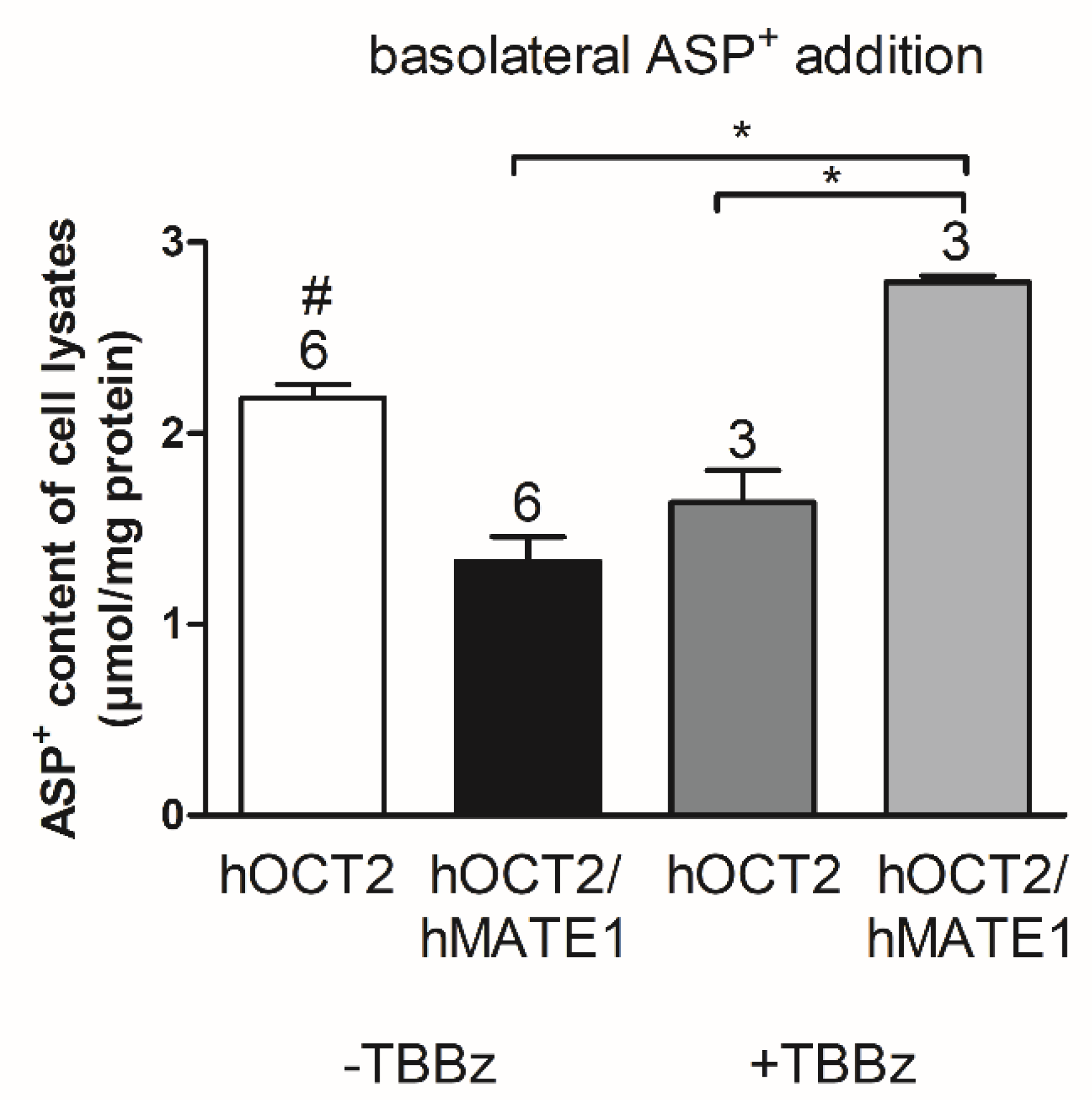 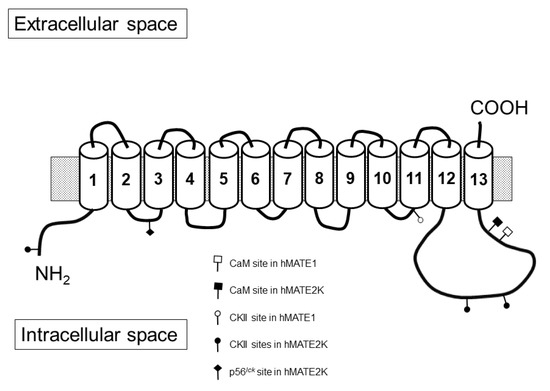 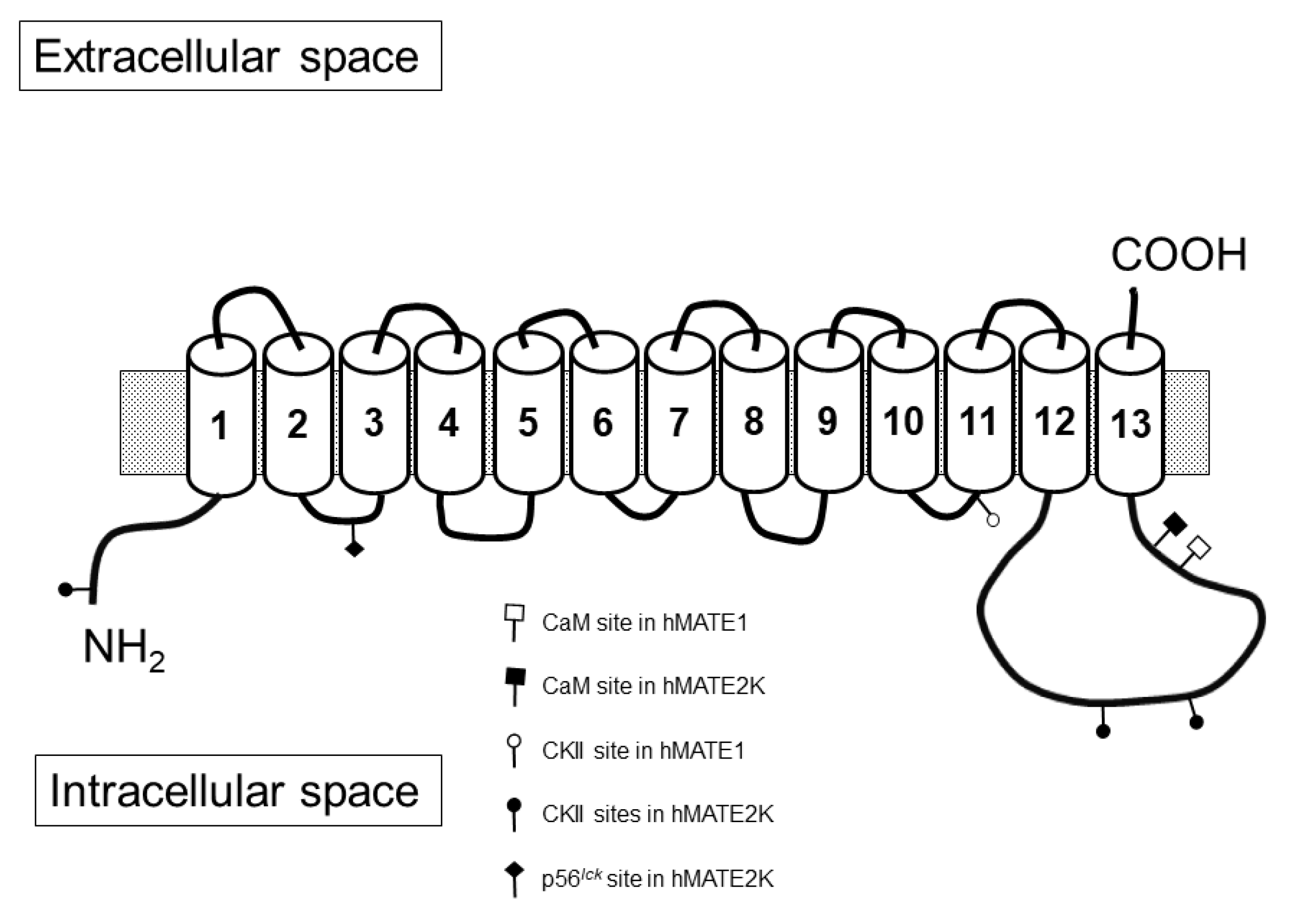 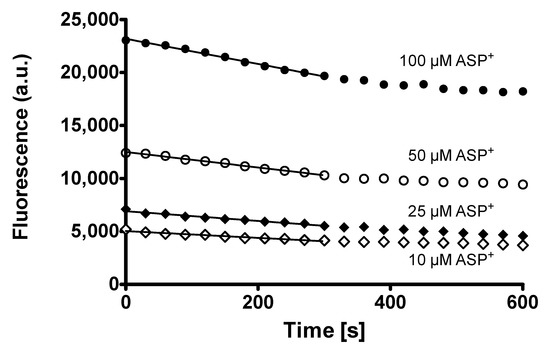 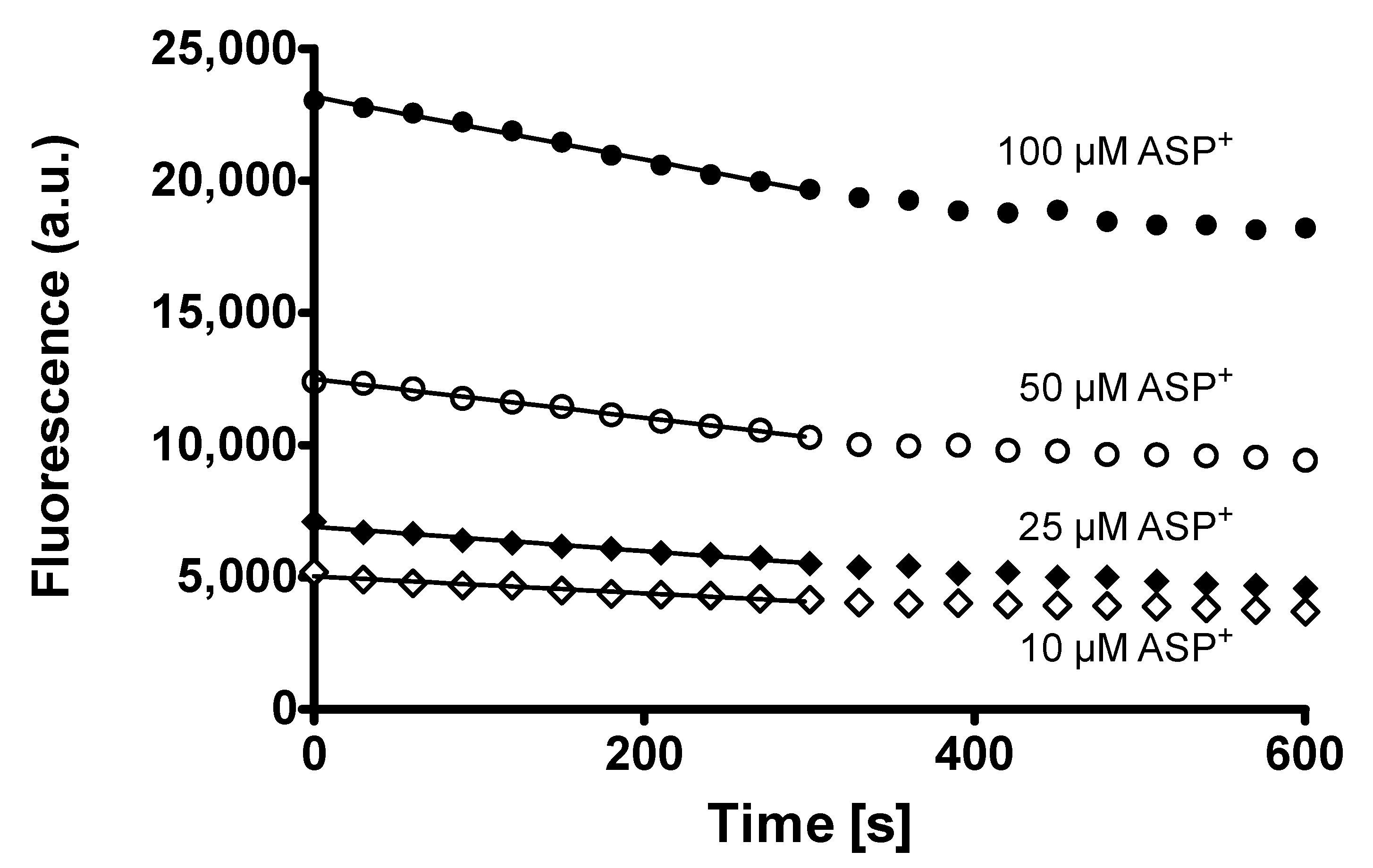