Genome-Wide Profiling and Phylogenetic Analysis of the SWEET Sugar Transporter Gene Family in Walnut and Their Lack of Responsiveness to Xanthomonas arboricola pv. juglandis Infection
Previous Article in Journal

Is Sleep Disruption a Cause or Consequence of Alzheimer’s Disease? Reviewing Its Possible Role as a Biomarker
Previous Article in Special Issue

Construction of a High-Density Genetic Map and Mapping of Firmness in Grapes (Vitis vinifera L.) Based on Whole-Genome Resequencing

Lithium salt is the first-line therapeutic option for bipolar disorder and has been proposed as a potential antitumoral drug. The effects of LiCl treatment were investigated in SH-SY5Y, a human neuroblastoma cell line and an in vitro model of dopaminergic neuronal differentiation. LiCl, at the dosage used in psychiatric treatment, does not affect cell proliferation, while at higher doses it delays the SH-SY5Y cell division cycle and for prolonged usage reduces cell viability. Moreover, the ion treatment affects DNA integrity as demonstrated by accumulation of p53 and γH2AX (the phosphorylated form of H2AX histone), two important markers of genome damage. p57Kip2, a CIP/Kip protein, is required for proper neuronal maturation and represents a main factor of response to stress including genotoxicity. We evaluated the effect of lithium on p57Kip2 levels. Unexpectedly, we found that lithium downregulates the level of p57Kip2 in a dose-dependent manner, mainly acting at the transcriptional level. A number of different approaches, mostly based on p57Kip2 content handling, confirmed that the CKI/Kip reduction plays a key role in the DNA damage activated by lithium and suggests the unanticipated view that p57Kip2 might be involved in DNA double-strand break responses. In conclusion, our study identified novel roles for p57Kip2 in the molecular mechanism of lithium at high concentration and, more in general, in the process of DNA repair. View Full-Text
Keywords: p57Kip2; LiCl; SH-SY5Y; oxidative stress; DNA damage; DNA damage response p57Kip2; LiCl; SH-SY5Y; oxidative stress; DNA damage; DNA damage response
►▼ Show Figures 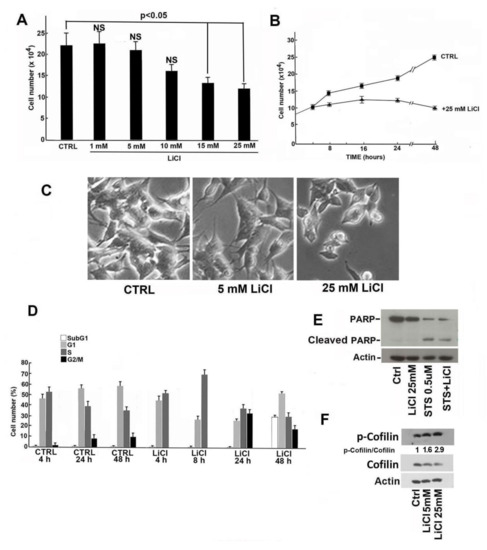