Matrix Vesicles: Role in Bone Mineralization and Potential Use as Therapeutics

Comparison of Direct Oral Anticoagulant Use for the Treatment of Non-Valvular Atrial Fibrillation in Pivotal Clinical Trials vs. the Real-World Setting: A Population-Based Study from Southern Italy

Patients enrolled into pivotal randomized controlled trials (RCTs) may differ substantially from those treated in a real-world (RW) setting, which may result in a different benefit–risk profile. The aim of the study was to assess the external validity of pivotal RCT findings concerning direct oral anticoagulants (DOACs) for the treatment of nonvalvular atrial fibrillation (NVAF) by comparing patients recruited in RCTs to those treated with DOACs registered in a southern Italian local health unit (LHU) in the years 2013–2017. The Palermo LHU claims database was used to describe the baseline characteristics of incident DOAC users (washout > 1 year) with NVAF compared with those of enrolled patients in DOAC pivotal RCTs. In the RW, DOAC treatment discontinuation was calculated during the follow-up and compared with DOAC treatment discontinuation of enrolled patients in DOAC pivotal RCTs. Rates of effectiveness and safety outcomes during the follow-up were calculated in an unmatched and in a simulated RCT population, by matching individual incidental RW and RCT DOAC users (excluding edoxaban users) on age, sex, and CHADS2 score. Overall, 42,336 and 7092 incident DOAC users with NVAF were identified from pivotal RCTs and from the RW setting, respectively. In RCTs, DOAC use was more common among males (62.6%) compared with an almost equal sex distribution in the RW. RCT patients were younger (mean age ± standard deviation: 70.7 ± 9.2 years) than RW patients (76.0 ± 8.6 years). Compared with RCTs, a higher proportion of RW dabigatran users (30.4% vs. 19.6%) and a lower proportion of RW apixaban (15.9% vs. 25.3%) and rivaroxaban (20.4% vs. 23.7%) users discontinued the treatment during the follow-up (p-value < 0.001). The rate of ischemic stroke was lower in RW high-dose dabigatran users (unmatched/-matched population: 0.40–0.11% per year) than in the Randomized Evaluation of Long-Term Anticoagulation Therapy (RE-LY) population (0.93% per year). Major bleeding rates were lower in RW users than in RCT users. In conclusion, except for dabigatran, a lower proportion of DOAC discontinuers was observed in the real-world than in pivotal RCT settings. This study provides reassurance to practicing physicians that DOAC use appears to be effective in stroke prevention and is likely safer in RW patients than in RCT enrolled patients. These results may be related to a lower burden of comorbidities despite more advanced age in the RW population compared to the pivotal RCT population. View Full-Text
Keywords: direct oral anticoagulants; nonvalvular atrial fibrillation; external validity; real world direct oral anticoagulants; nonvalvular atrial fibrillation; external validity; real world
►▼ Show Figures 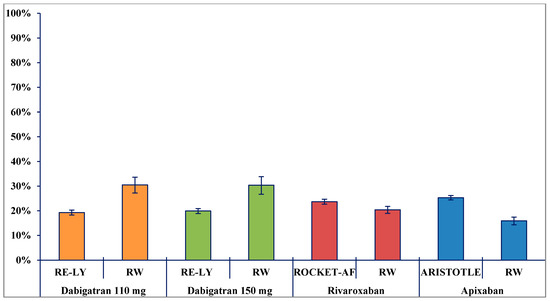