Suicide is a leading cause of death, particularly in rural and remote areas. Although depression is strongly related to both suicidal ideation and attempt, it lacks specificity as a predictor, and little is known about characteristics that increase suicide risk among people with depression. A telephone version of the World Mental Health Composite International Diagnostic Interview explored lifetime depression, suicidal ideation, suicide attempt, and related factors among a community-dwelling sample of rural and remote Australians, selected for an interview based on a screener for psychological distress (100% of those with high distress, 75% of those with moderate distress, and 16% of those with low distress). Of 1051 participants interviewed, 364 reported lifetime symptoms of depression; of these, 48% reported lifetime suicidal ideation and 16% reported a lifetime suicide attempt. While depression severity was a significant correlate of suicidality for both males and females, suicide attempt was significantly more common among females with a younger age of depression onset, and a higher number of psychiatric comorbidities. No additional factors were significant for males. Among rural and remote residents with lifetime symptoms of depression, the identification of suicide risk may be enhanced by considering individual and contextual factors beyond depression severity. Further research focusing on risk factors for males would be beneficial. View Full-Text
Keywords: depression; suicide; suicidal ideation; suicide attempt; rural; Composite International Diagnostic Interview depression; suicide; suicidal ideation; suicide attempt; rural; Composite International Diagnostic Interview
►▼ Show Figures 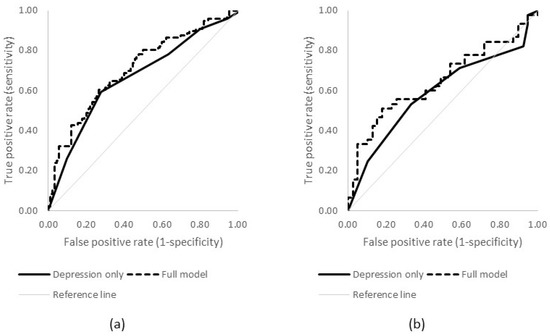