Ultraviolet Radiation Albedo and Reflectance in Review: The Influence to Ultraviolet Exposure in Occupational Settings
Next Article in Special Issue

Understanding the Influence of Crop Residue Burning on PM2.5 and PM10 Concentrations in China from 2013 to 2017 Using MODIS Data
Previous Article in Special Issue

Antimicrobial Resistance in Food Animals and the Environment in Nigeria: A Review

The prevalence of pathogenic microorganisms, as well as the proliferation of antimicrobial resistance, pose a significant threat to public health. However, the magnitude of the impact of aquatic environs concerning the advent and propagation of resistance genes remains vague. Escherichia coli (E. coli) are widespread and encompass a variety of strains, ranging from non-pathogenic to highly pathogenic. This study reports on the incidence and antibiotic susceptibility profiles of E. coli isolates recovered from the Nahoon beach and its canal waters in South Africa. A total of 73 out of 107 (68.2%) Polymerase chain reaction confirmed E. coli isolates were found to be affirmative for at least one virulence factor. These comprised of enteropathogenic E. coli 11 (10.3%), enteroinvasive E. coli 14 (13.1%), and neonatal meningitis E. coli 48 (44.9%). The phenotypic antibiogram profiles of the confirmed isolates revealed that all 73 (100%) were resistant to ampicillin, whereas 67 (91.8%) of the pathotypes were resistant to amikacin, gentamicin, and ceftazidime. About 61 (83.6%) and 51 (69.9%) were resistant to tetracycline and ciprofloxacin, respectively, and about 21.9% (16) demonstrated multiple instances of antibiotic resistance, with 100% exhibiting resistance to eight antibiotics. The conclusion from our findings is that the Nahoon beach and its canal waters are reservoirs of potentially virulent and antibiotic-resistant E. coli strains, which thus constitute a potent public health risk. View Full-Text
Keywords: E. coli; surface water; antibiotic-resistance gene; MARI; MARP; multidrug resistance E. coli; surface water; antibiotic-resistance gene; MARI; MARP; multidrug resistance
►▼ Show Figures 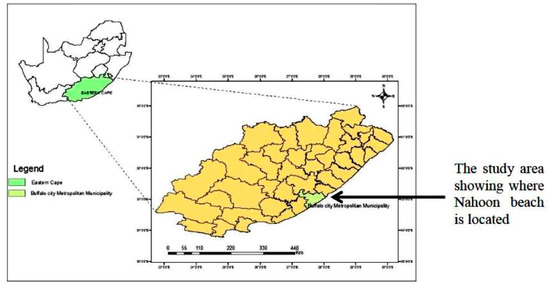