Does Health Insurance Modify the Association Between Race and Cancer-Specific Survival in Patients with Urinary Bladder Malignancy in the U.S.?
Next Article in Special Issue

The Associations of Vitamin D Status with Athletic Performance and Blood-borne Markers in Adolescent Athletes: A Cross-Sectional Study
Previous Article in Journal

Does the Mode of Exercise Influence the Benefits Obtained by Green Exercise?

Changes in social and built environments most likely contribute to a decline in physical activity (PA) and physical fitness in children and adolescents. Organized sports may be an important component in ensuring adequate fitness, which is an important aspect in general health and well-being. The present study examines differences by club sports participation in cardiorespiratory endurance, muscular strength, power, speed, agility, flexibility and balance in 3293 (55.1% male) Austrian children and adolescents between 6 and 14 years of age. Anthropometric measurements (height and weight) were taken and participants completed the German motor test during regular class time. Even though there was no significant difference in body weight between club sports participants and non-club sports participants, club sports participation was associated with higher physical fitness, particularly regarding endurance, strength, power, and agility. Differences by club sports participation, however, declined during the elementary school years (6–10 years of age), while they became more pronounced during middle school years (10–14 years of age). Club sports participation, therefore, may be a viable option in the promotion of physical fitness, particularly during adolescence. At younger ages, other sources of PA, such as physical education and free play, however, should be considered to ensure sufficient fitness levels that contribute to a healthy and active lifestyle.
Keywords: cardiorespiratory endurance; strength; power; agility; body weight; children; adolescents; physical activity cardiorespiratory endurance; strength; power; agility; body weight; children; adolescents; physical activity

Insufficient physical activity (PA) is one of the major threats to public health due to the detrimental effects on physical and mental health [1,2]. Of particular concern is the high number of youth who are not meeting the current recommendation of at least 60 min of moderate-to-vigorous PA per day [3,4,5], as habits and attitudes towards PA are formed at young ages and are subsequently carried into adulthood [6]. Many children and adolescents already present at least one cardiometabolic risk marker [7], even though clinical symptoms of cardiovascular disease (CVD) may not become apparent until adulthood [8]. The decline in PA at young ages has at least partially been attributed to changes in social and built environments, which facilitate an increasingly sedentary lifestyle of children and adolescents [9,10,11]. Besides prolonged sitting times during school hours, sedentary pursuits such as watching TV or playing computer games have become popular leisure choices [12,13]. Low PA levels during childhood and adolescence have also contributed to a decline in physical fitness [14,15,16], which has detrimental effects on various health outcomes and affects cognitive development and academic performance [17,18,19]. Physical fitness is defined as a person’s ability to carry out daily activities without undue fatigue and adequate energy reserves to enjoy recreational pursuits [20]. Physical fitness, therefore, may also be an important contributor to an active and healthy lifestyle beyond childhood and adolescence.
Given the large amount of sedentary choices during leisure time, which hinders recreational PA, participation in organized PA such as club sports is becoming an important contributor to PA in youth [21,22,23]. Additionally, organized sports have become one of the most popular contexts for health promotion in children and adolescents [4]. A recent review reported that 40–59% of European children and adolescents participate in club sports [4], and available evidence indicates that youth spend the majority of their daily PA in organized PA such as sports [24,25]. Accordingly, club sports participation has been associated with greater total PA and a higher probability of meeting PA recommendations [22,26,27,28]. Particularly, recommendations for vigorous PA have been more definitively achieved in club sports participants [28,29], and there appears to be a beneficial association of sports participation during childhood and adolescence with PA levels during adulthood [30,31,32].
Sports participation has also been shown to have a stronger relationship with physical fitness compared to non-organized leisure time PA [33]. This may at least partially be attributed to the energetic challenges of club sports participation, as habitual PA bursts may not be of sufficient volume and intensity to modify physical fitness [34,35]. Higher fitness may further contribute to a greater enjoyment of PA and increase the likelihood for a sustainable active lifestyle. In addition, physical fitness has been suggested as an important biomarker for health and well-being [36]. In order to enhance the understanding of the association between club sports participation and physical fitness that could inform intervention strategies, additional research is warranted. The present study, therefore, examines differences in cardiorespiratory endurance, strength, power, speed, agility, flexibility and balance by club sports participation across a wide age range of Austrian children and adolescents.

A total of 20 elementary schools (grades 1–4) and 14 middle schools (grades 5–8) from various districts in Western Austria were contacted for participation in the study. Six schools (two elementary schools, four middle schools) declined to participate due to organizational problems resulting in a final sample of 28 schools with 3293 (55.1% male) participants. Data was collected between September 2015 and December 2016. Parents received written information about the study prior to data collection and provided written informed consent. Oral assent was obtained from the participants at the time of data collection. The study was conducted in accordance with the declaration of Helsinki 1975, revised in 2013 (https://www.wma.net/what-we-do/medical-ethics/declaration-of-helsinki/), and was approved by the Institutional Review Board of the University of Innsbruck, Austria and the respective school boards.

Body weight (kg) and height (cm) were measured according to standard procedures with children wearing gym clothes and in bare feet. Body weight was measured to the nearest 0.1 kg with an electronic scale (GRUNDIG 3710, Grundig AG, Germany), and height was measured to the nearest 0.1 cm with a portable stadiometer (SECA 217, Seca, Germany). Body mass index (BMI) was calculated (kg/m²) and converted to BMI percentiles (BMIPCT) based on German reference values [37]. Subsequently, participants were classified as underweight (<10th percentile), normal weight (10–90th percentile) or overweight/obese (>90th percentile).

Physical fitness was assessed with the German motor test (Deutscher Motorik Test, DMT6-18) [38]. The DMT6-18 is a standardized and validated test that consists of eight items (20 m sprint, standing long jump, sit ups, push-ups, 6-min run, sideways jumping, backwards balancing, stand-and-reach test) and provides information on speed, power, strength, cardiorespiratory endurance, agility, balance, and flexibility. All tests were administered by trained personnel and completed in a single session during regular school time. After a standardized warm-up, participants performed the 20 m sprint. The remaining tests were performed in random order, except for the 6-min run, which was performed at the end of the test session. In addition to raw performance values, the DMT6-18 provides age- and sex-standardized scores based on a German reference sample [37], with a score of 100 indicating average performance for the respective age and sex. The mean of the age- and sex-standardized scores across all test items was further used as the overall fitness score.
Sports participation was determined via self-report, and students were classified as either club sports participants or non-club sports participants.

In light of the changes in social and built environments that contribute to an increasingly sedentary lifestyle in children and adolescents, organized sports appears to be an important contributor to ensuring sufficient physical fitness in youth. Given the association between physical fitness and general health and well-being, this could also have important health implications later in life. 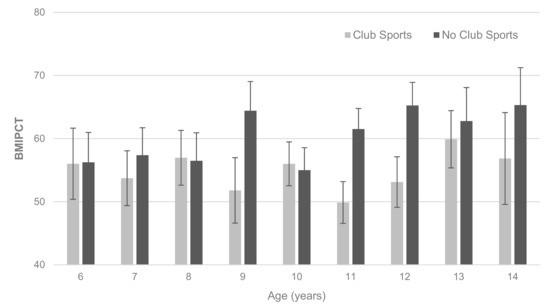 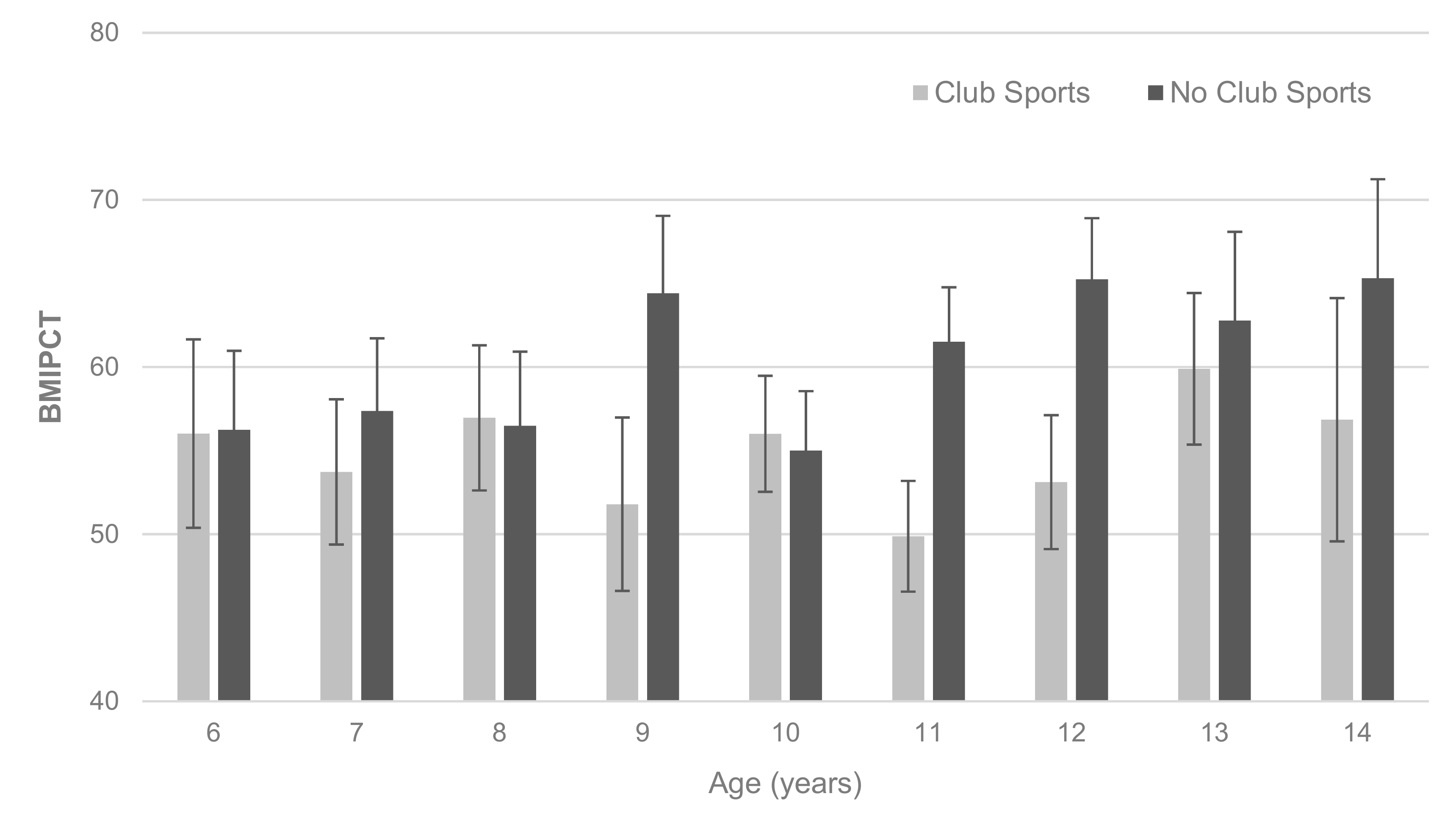 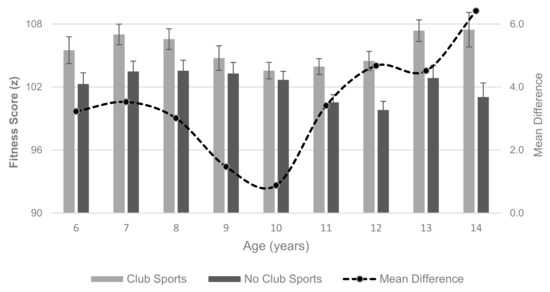 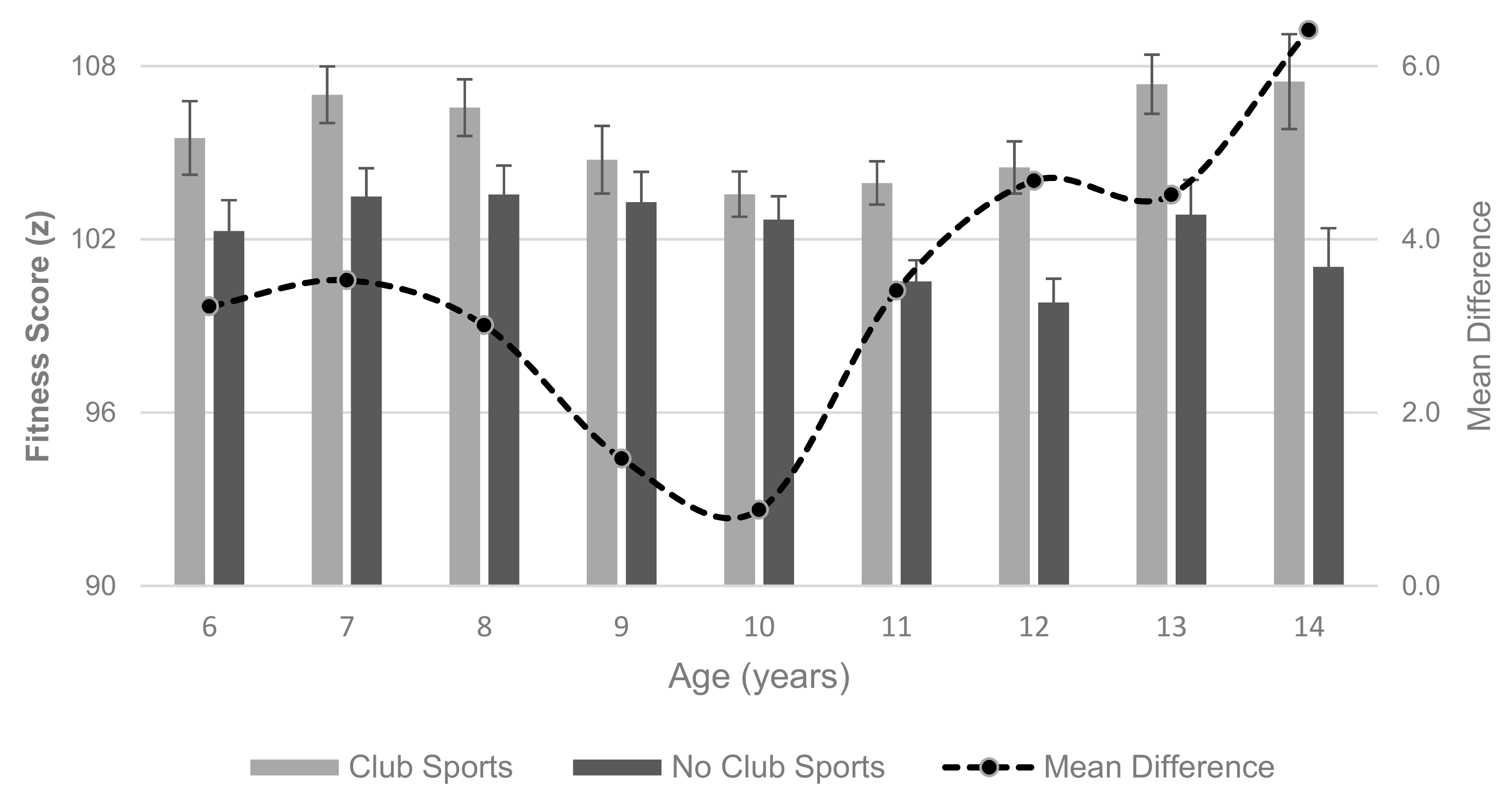 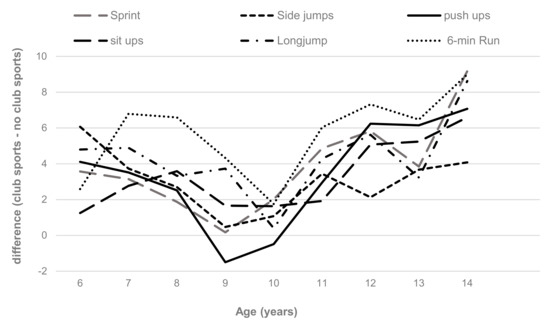 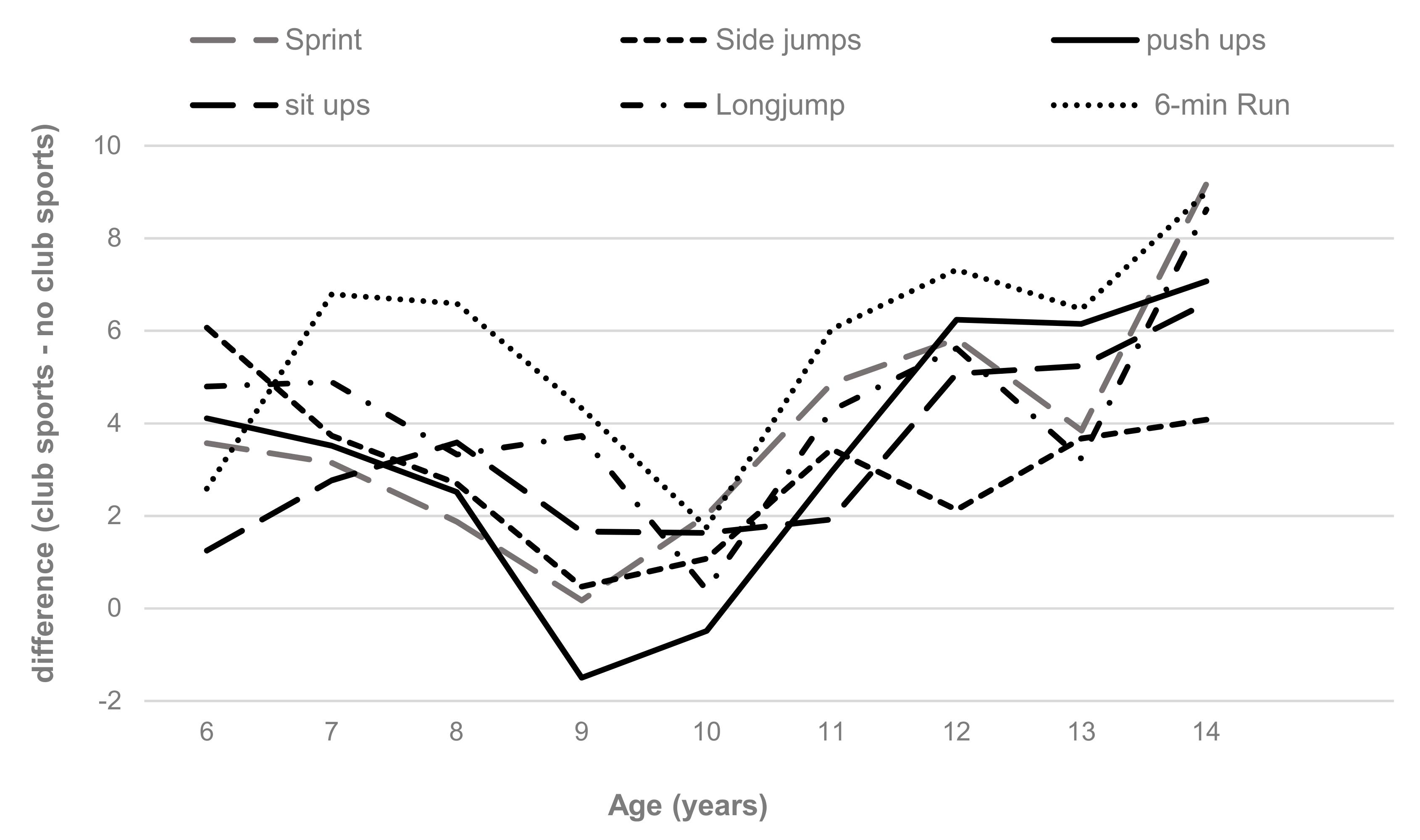