Perceptions of Harmfulness of Heated Tobacco Products Compared to Combustible Cigarettes among Adult Smokers in Japan: Findings from the 2018 ITC Japan Survey
Previous Article in Journal

Ranking Preventive Interventions from Different Policy Domains: What Are the Most Cost-Effective Ways to Improve Public Health?
Previous Article in Special Issue

Concurrent Daily and Non-Daily Use of Heated Tobacco Products with Combustible Cigarettes: Findings from the 2018 ITC Japan Survey

Use of Multiple Tobacco and Tobacco-Like Products Including Heated Tobacco and E-Cigarettes in Japan: A Cross-Sectional Assessment of the 2017 JASTIS Study

We used data from The Japan “Society and New Tobacco” Internet Survey (JASTIS): A longitudinal internet cohort study of HTPs, e-cigarettes, and conventional tobacco products in Japan [13]. Cross-sectional data from two cohorts of the 2017 JASTIS study were integrated and analyzed in this study. These cohorts comprised (1) respondents who had been followed up since the 2015 baseline survey: men and women aged 15–69 years in 2015 (n = 4217; response rate of 51.2% in 2017), and (2) respondents from a new baseline survey in 2017: men and women aged 15–69 years in 2017 (n = 5897; this survey was closed when the target number of respondents who had answered all the questionnaire items was reached). The baseline participants were randomly selected from panel members. The follow-up survey for cohort (1) was conducted from 27 January to 27 February 2017 and the baseline survey for cohort (2) was from 24 February to 13 March 2017. Further details are available in the cohort profile paper [13].
The survey panel was managed by a major, nationwide, internet research agency, Rakuten Research, which maintains a pool of 2.3 million panelists covering all social categories, such as education, housing tenure, and marital status, as defined by the Japanese census [14]. Members of the survey panel were initially recruited through the Rakuten agency group. At the time of registration, participants were required to provide information such as sex, age, occupation, and area of residence and to agree that they would participate in different research surveys with web-based written consent. Minors provided their consent with approval from their parents or guardians. After exclusion of those whose responses showed unnatural discrepancies (e.g., respondents who chose the same number throughout a set of questions), 10,114 respondents (4,217 from cohort (1) and 5,897 from cohort (2)) were analyzed using inverse probability weighting (IPW) for being a respondent in an internet survey to approximate a nationally representative sample [15,16]. There were no missing data in any factors used in the analysis.

2.2.1. Current Tobacco and Tobacco-Like Products Use

2.2.3. Risk Perception of E-cigarettes and HTPs

As internet survey respondents are not representative of the general population, we conducted statistical adjustment to account for bias. Harmonization of the data with a major national and representative cross-sectional study (i.e., the Comprehensive Survey of Living Conditions of People on Health and Welfare (CSLCPHW), conducted by the Japanese Ministry of Health, Labor and Welfare) allowed us to pool data, providing the potential capacity to adjust for being a respondent in an internet survey [15,17]. Using this method, we could approximate our estimate to a nationally representative estimate with inverse probability weighting to account for baseline characteristics such as socio-demographic, health-related, and tobacco-related factors [15,17]. Details have also been given in a previous report [15]. The efficacy of adjustment using IPW is shown in Table S1.
We used data from our internet surveys and CSLCPHW for a multivariable logistic regression model and calculated the propensity score (PS) for each of 12 strata (sex × age groups), which set a deductive sample size in the internet surveys. For males and females aged 20–71 years, we adjusted residence, marital status, education, household, occupation, self-rated health, and smoking status for the 2016 CSLCPHW. For males and females aged 15–19 years, we adjusted residence, education, household, self-rated health, and smoking status for the 2010 CSLCPHW, because data for smoking status in minors were not available in the 2016 CSLCPHW.
To estimate the prevalence of multiple tobacco products use in Japan, weighted percentages were estimated with inverse probability weighting (IPW) adjustments and 95% confidence intervals (CIs) for single and multiple tobacco products use (defined above) using Wald and exact methods. To explore predictors of multiple tobacco products use, we estimated adjusted odds ratios (aORs) and 95% confidence intervals (CIs) for multiple tobacco products use by multivariable logistic regression models using standardized IPW, adjusting for tobacco-related, sociodemographic, and other factors. The survey data were selected and the IPW was calculated using SAS V.9.3.; the prevalence and predictors of multiple tobacco products use were estimated with R V.3.3.3. using the following library: DescTools for calculation of 95% confidence intervals [18]. The study was reviewed and approved by the Research Ethics Committee of the Osaka International Cancer Institute (no. 1412175183).

3.1. Prevalence of Current Product Use

3.2. Percentage Use of Products

3.4. Predictors of Multiple Tobacco Products Use

4.1. Prevalence of Current Product Use

To our knowledge, this is the first report on multiple tobacco products use in Japan, a country which currently has a more than 80% share in the worldwide market of IQOS, i.e., a major brand of HTPs. In the current study, we report the percentages of tobacco and tobacco-like products users in Japan in 2017 (Table 1): 21.6% of Japanese adults are current product users; 18.4% and 3.2% currently use single and multiple tobacco products, respectively. Conventional combustible cigarettes were still the most popular product in both single (17.0%) and multiple (3.1%) products use in Japan. This smoking rate is similar to the results from a nationally representative survey, the health and nutrition survey in Japan conducted by the Ministry of Health, Labor and Welfare (17.7%) in 2017 [20] as well as the 2016 CSLCPHW (19.8%) [19]. Figure 1 shows HTPs are used more frequently by multiple product users (10.6%) than single ones (5.2%). Total HTP users accounted for 15.8% of current product users. Although HTPs have come to the market recently, they are the second most popular tobacco product among current product users. The popularity of HTPs rather than e-cigarettes may be due to the difference in product regulation in Japan. The sale of nicotine-containing e-cigarettes has been banned in Japan (nicotine is treated as a pharmaceutical agent), while HTPs, that also contain nicotine, are not banned (they are treated as tobacco products). In contrast, 99.0% of e-cigarettes sold in the US in 2015 contained nicotine, but the sale of HTPs was not allowed at that time [21].

4.2. Predictors of Multiple Tobacco Products Use

This study has several limitations. First, since it was a cross-sectional study, our results could not indicate causality, only association between variables. Second, our study was based on an internet survey and, thus, we used IPW adjustment to account for being an internet survey respondent using nationally representative data. Since this method cannot completely adjust for the difference in respondents between an internet survey and a nationwide representative survey, the problem of generalizability remains. Third, we possibly failed to provide a validated estimate for non-popular products (e.g., smokeless tobacco products), since the prevalence was very low and our sample size was limited.

This work was supported by Health Labor Sciences Research Grants (H29-tokubetsu-shitei-006), and Japan Society for the Promotion of Science (JSPS) KAKENHI Grants (18H03062 and 16K13419). The funding sources had no role in the design and conduct of the study; in the analysis and interpretation of the data; or in the preparation, review, or approval of the manuscript. 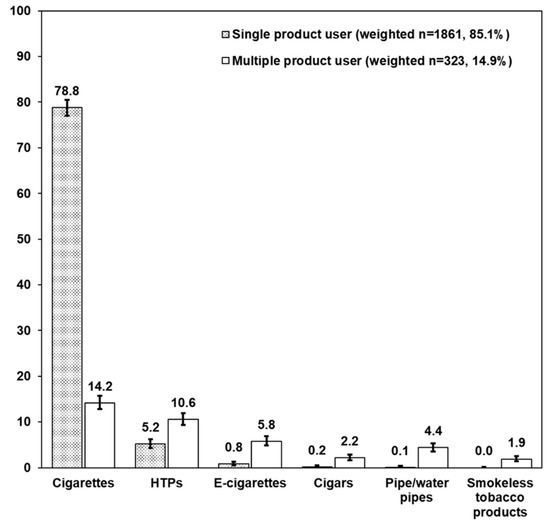 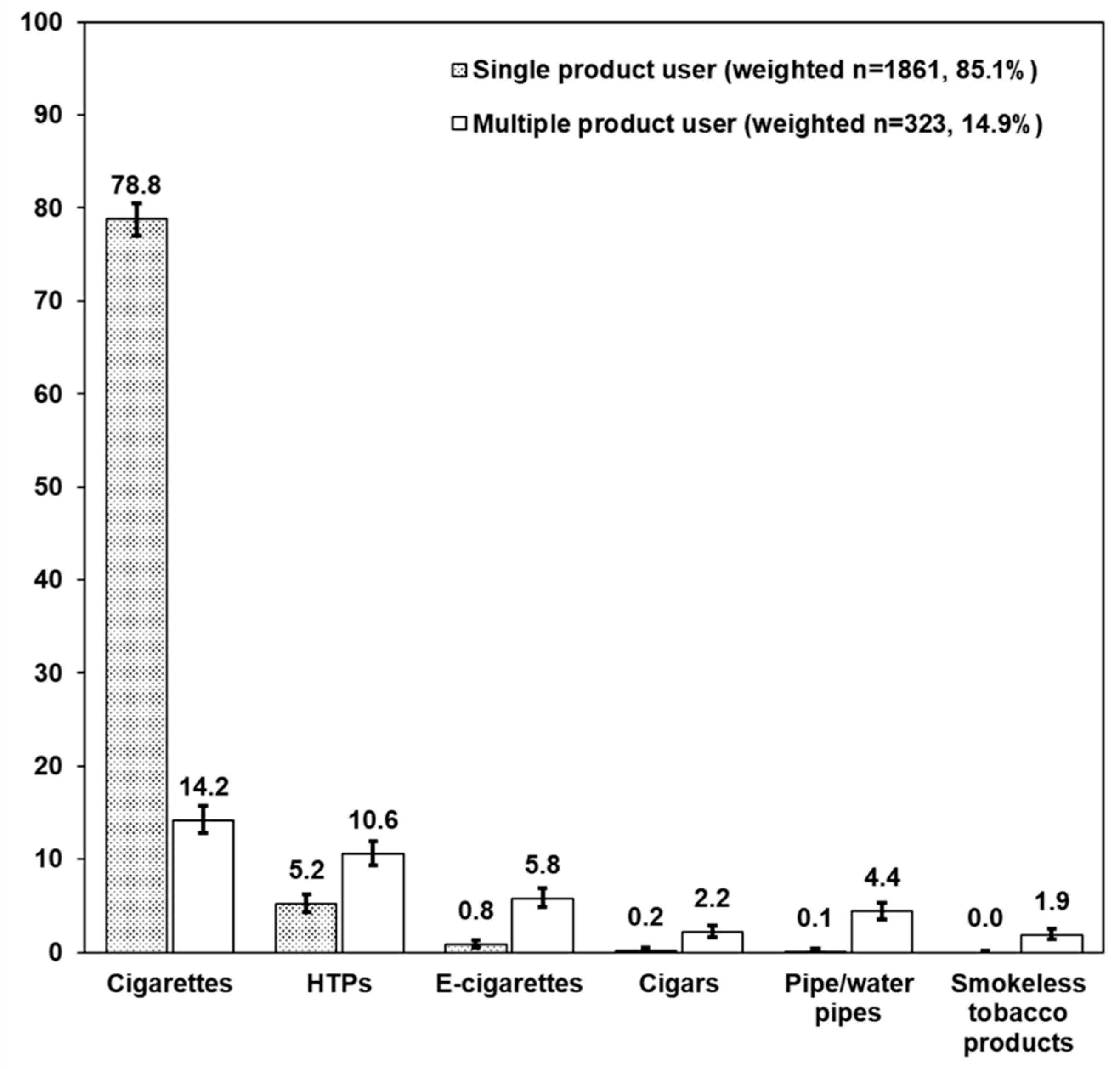