Associations among Employment Status, Health Behaviors, and Mental Health in a Representative Sample of South Koreans

Climate change has a distinct impact on agriculture in China, particularly in the northeast, a key agriculture area sensitive to extreme hydroclimate events. Using monthly climate and agriculture data, the influence of drought on maize and soybean yields—two of the main crops in the region—in northeast China since 1961 to 2017 were investigated. The results showed that the temperature in the growing season increased by 1.0 °C from the period 1998–2017 to the period 1961–1980, while the annual precipitation decreased slightly. However, precipitation trends varied throughout the growing season (May–September), increasing slightly in May and June, but decreasing in July, August and September, associated with the weakening of the East Asian summer monsoon. Consequently, the annual and growing season drought frequency increased by 15%, and 25%, respectively, in the period 1998–2017 relative to the period 1961–1980. The highest drought frequency (55%) was observed in September. At the same time, the drought intensity during the growing season increased by 7.8%. The increasing frequency and intensity of drought had negative influences on the two crops. During moderate drought years in the period 1961–2017, 3.2% and 10.4% of the provincial maize and soybean yields were lost, respectively. However, during more severe drought years, losses doubled for soybean (21.8%), but increased more than four-fold for maize (14.0%). Moreover, in comparison to the period 1961–1980, a higher proportion of the yields were lost in the period 1998–2017, particularly for maize, which increased by 15% (increase for soybean was 2.4%). This change largely depends on increasing droughts in August and September, when both crops are in their filling stages. The impact of drought on maize and soybean production was different during different growth stages, where a strong relationship was noted between drought and yield loss of soybean in its filling stage. Given the sensitivity of maize and soybean yields in northeast China to drought, and the observed production trends, climate change will likely have significant negative impacts on productivity in the future. View Full-Text
Keywords: drought; climate change; maize and soybean; northeast China drought; climate change; maize and soybean; northeast China
►▼ Show Figures 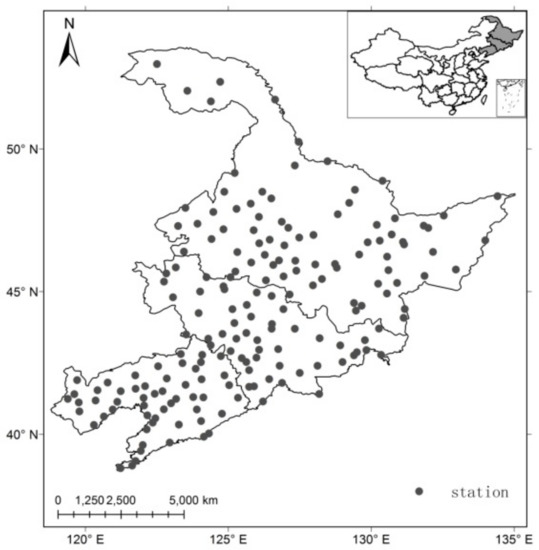