SARS-CoV-2 Infection, Risk Perception, Behaviour and Preventive Measures at Schools in Berlin, Germany, during the Early Post-Lockdown Phase: A Cross-Sectional Study
Next Article in Special Issue

Association between Adherence with Recommended Antenatal Care in Low-Risk, Uncomplicated Pregnancy, and Maternal and Neonatal Adverse Outcomes: Evidence from Italy

This study aimed to investigate type of loco-regional treatment received, associated treatment factors and mortality outcomes in New Zealand women with early-stage breast cancer who were eligible for breast conserving surgery (BCS). This is a retrospective analysis of prospectively collected data from the Auckland and Waikato Breast Cancer Registers and involves 6972 women who were diagnosed with early-stage primary breast cancer (I-IIIa) between 1 January 2000 and 31 July 2015, were eligible for BCS and had received one of four loco-regional treatments: breast conserving surgery (BCS), BCS followed by radiotherapy (BCS + RT), mastectomy (MTX) or MTX followed by radiotherapy (MTX + RT), as their primary cancer treatment. About 66.1% of women received BCS + RT, 8.4% received BCS only, 21.6% received MTX alone and 3.9% received MTX + RT. Logistic regression analysis was used to identify demographic and clinical factors associated with the receipt of the BCS + RT (standard treatment). Differences in the uptake of BCS + RT were present across patient demographic and clinical factors. BCS + RT was less likely amongst patients who were older (75+ years old), were of Asian ethnicity, resided in impoverished areas or areas within the Auckland region and were treated in a public healthcare facility. Additionally, BCS + RT was less likely among patients diagnosed symptomatically, diagnosed during 2000–2004, had an unknown tumour grade, negative/unknown oestrogen and progesterone receptor status or tumour sizes ≥ 20 mm, ≤50 mm and had nodal involvement. Competing risk regression analysis was undertaken to estimate the breast cancer-specific mortality associated with each of the four loco-regional treatments received. Over a median follow-up of 8.8 years, women who received MTX alone had a higher risk of breast cancer-specific mortality (adjusted hazard ratio: 1.38, 95% confidence interval (CI): 1.05–1.82) compared to women who received BCS + RT. MTX + RT and BCS alone did not have any statistically different risk of mortality when compared to BCS + RT. Further inquiry is needed as to any advantages BCS + RT may have over MTX alternatives. View Full-Text
Keywords: breast conserving therapy; mastectomy; survival; associated factors breast conserving therapy; mastectomy; survival; associated factors
►▼ Show Figures 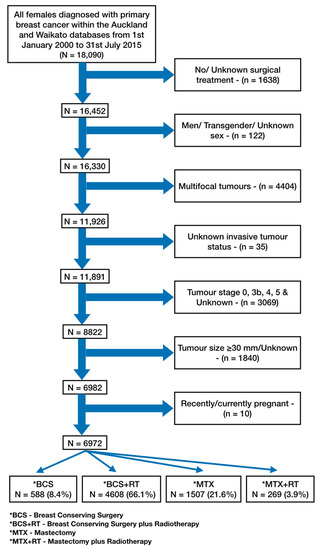