Social Image of Nursing. An Integrative Review about a Yet Unknown Profession

The study was approved by the Ponce Research Institute IRB committee (protocol #141007-EC). Baseline assessments were performed a week before starting chemotherapy, and quarterly for up to 9 months. Participants received a 10 USD incentive for each assessment/time point.

Participant recruitment took place at a community oncology clinic located in an urban area of Puerto Rico. Participants were recruited by convenience during their follow-up oncology appointment. Considering that this was a pilot study, the team estimated the sample size on the availability of participants for recruitment during the proposed time frame. Participant eligibility: 21 years of age and over, confirmed cancer diagnosis and scheduled to receive the first course of chemotherapy within the next 2 weeks after baseline assessment. Participant exclusion: had received any other cancer therapy (e.g., radiotherapy, hormonal therapy) 5 years prior to the recruitment date; were experiencing a depressive mood at the time of screening; use of illicit drugs or alcohol use disorder; history of psychotic disorders. A total of 96 patients were screened and 52 met the inclusion criteria.

Patient socio-demographic and clinical data: socio-demographic information was collected using a self-reported measure. Socio-demographic variables included age, sex, monthly income, education level, marital status, employment status, medical insurance, as well as religious and spiritual practices. Clinical information was gathered through medical chart reviews and included tumor site, tumor stage, and type of treatment. Self-reported personal and family history of mental health disorders data were collected.
Anxiety and depression symptoms: symptoms of anxiety and depression were assessed using the Spanish version of the Hospital and Anxiety Depression Scale (HADS). This 14-item scale evaluates the frequency of experiencing anxiety and depression symptoms. The HADS total scale Cronbach alpha is 0.88, 0.85 for the anxiety sub-scale, and 0.83 for the depression sub-scale [14]. It includes somatic symptoms of anxiety and depression (headaches, fatigue, insomnia, anergia, etc.) that can be caused by side effects related to cancer and its treatment [15].
Disease- and treatment-related symptoms: physical symptoms were assessed using the MD Anderson Symptom Inventory (MDASI). The MDASI [16] is a 19-item scale that measures cancer symptom severity (Cronbach alpha = 0.91) and its interference (Cronbach alpha = 0.85) with daily life activities. Symptoms at their worst over the past 24 h and interference with daily activities are rated by participants on a 0 to 10 Likert scale.
Health quality of life: health-related quality of life was evaluated with the Spanish version of the Functional Assessment of Cancer Therapy—General Version 4 (FACT—G) developed by Cella [17]. This is a 28-item scale designed to rate physical, social/family, emotional, and functional well-being using a 5-point Likert scale. Test–retest correlation reliability coefficients were 0.92 for the total score, 0.88 for physical well-being, 0.84 for functional well-being, 0.82 for social well-being, and 0. 82 for emotional well-being.

Descriptive statistics were used to characterize participants in the study. The association between depressive symptoms and socio-demographic characteristics was calculated using chi-square tests, Fisher’s exact tests, and Mann–Whitney tests, as appropriate. Additionally, adjusted multilevel mixed-effects linear regression models were used to classify the association between HADS scores for depression and anxiety, period of time receiving oncology treatment (follow-up visits), participants’ quality of life (FACT—G scale), cancer symptoms burden (MDASI scale), age, sex, and marital status; all variables were included in the adjusted model. A total of 50 participants were included in the linear mixed models, which used the full data set despite missing values at some time points. Data were missing at random, hence the means obtained from these models could be considered unbiased estimates. P-values less than 0.05 were considered statistically significant. Stata v.14 [18] was used to analyze all the data.

Figure 1 presents patients’ recruitment retention data and the reasons for not meeting the inclusion criteria. The recruitment rate was 60.46%, and the attrition rate was 56%.

More than half of this study’s participants were males (58.8%), had high school or greater education (70.6%), and were married (62.8%). Participants’ mean age was 63.3 (±14.6) years. The distribution of other socio-demographic and clinical characteristics is shown in Table 1. The most common cancer types among participants included colon and rectum (19.6%), breast (11.8%), and pancreas (11.8%); most of the malignancies were diagnosed in an advanced stage (44%). About 39.3% (11 out of 28 who completed all study measures) of the participants exhibited clinically significant depressive symptoms at least once during the study period. No associations were found between the presence of depressive symptoms and socio-demographic characteristics (p > 0.05; Table 2).

Overall, a slight reduction in anxiety (95% CI: −0.28, 0.18) and depression (95% CI: −0.12, 0.14) symptoms was observed through time among the participants, although not statistically significant. After adjusting for sex, age, marital status, quality of life, burden of cancer symptoms, and repeated measures effect among each participant, the overall HADS score mean during baseline measurements was 7.97 (95% CI: 4.43, 11.51) for depression and 11.06 (95% CI: 6.76, 15.36) for anxiety. The adjusted difference of the HADS score mean indicates that, between visits, participants had lower scores of depression symptoms during the first (1 month) and fourth (9 months) follow-up assessments as compared to baseline scores; changes in scores through time were not statistically significant. The HADS score for anxiety symptoms showed a significant decrease from 11.06 at baseline to 9.83 by the fourth visit (9 months) (adjusted = −1.23, 95% CI: −2.27, −0.19).

Table 3 illustrates associations between quality of life, depression, and anxiety symptoms, accordingly. Each 5-unit increase in the FACT—G scale (i.e., better quality of life) was associated with significantly decreased HADS scores of depression and anxiety (adjusted = −0.33; 95% CI: −0.47, −0.18) and 0.38 (adjusted = −0.38; 95% CI: −0.55, −0.20), individually, once the team adjusted for confounders such as sex, age, and marital status. Meanwhile, another 5-unit increase in the burden of cancer symptoms showed significant changes in the HADS scores for anxiety (adjusted = 0.11 [95% CI: 0.02, 0.19]; Table 3). Sub-scales for symptom intensity and interference of symptoms with different aspects of the participants’ life showed median values of 19 (Interquartile Range [IQR] = 5, 31) and 6 (IQR = 1.3, 19.3), correspondingly. Furthermore, higher HADS scores of anxiety were observed among women as compared to men (adjusted = 1.91; 95% CI: 0.58, 3.24).
Random effects for depression (LR test vs. linear model = 34.06; p < 0.0001) and anxiety (LR test vs. linear model = 21.72; p < 0.0001) showed that, for any visit, each participant might have a distinct intercept HADS scores up to 3.22 (depression) and 3.79 (anxiety) higher or lower than the average obtained from all participants as a group about 95% of the time. The variability of individual HADS scores during visits is around 1.60 and 2.00 for depression and anxiety, respectively, around the individual regression lines for each participant. Approximately 50.4% and 47.6% of the variance in HADS scores for depression and anxiety, respectively, can be attributed to differences between participants.

The study was conducted according to the guidelines of the Declaration of Helsinki and approved by the Institutional Review Board of Ponce Health Sciences University-Ponce Research Institute (protocol code 141007-EC) approved on 25 January 2015.

Informed consent was obtained from participants involved in the study.

The data presented in this study will be available in the supplementary material contained in this article.

The team would like to acknowledge the contribution of Lorena González-Sepúlveda from the Puerto Rico Clinical and Translational Research Consortium for her support with statistical analysis (U54MD007587 and U54GM133807). The content is solely the responsibility of the authors and does not necessarily represent the official views of the National Institutes of Health.

Heather Jim serves as a consultant to RedHill BioPharma and Janssen Scientific Affairs. Alia Bahamode is an employee of Merk—Puerto Rico. The other authors declare that they have no competing interests. The funders had no role in the design of the study; in the collection, analyses, or interpretation of data; in the writing of the manuscript, or in the decision to publish the results. 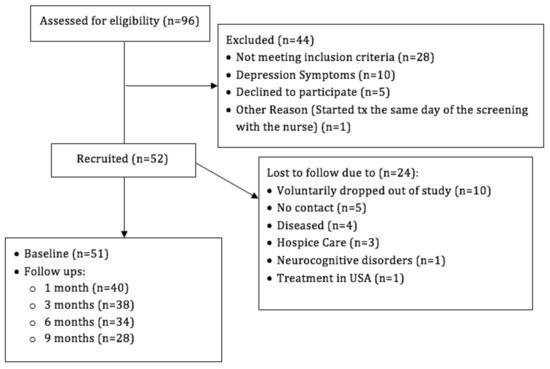