Ganodermaboninense (G. boninense) is a fungus that causes one of the most destructive diseases in oil palm plantations in Southeast Asia called basal stem rot (BSR), resulting in annual losses of up to USD 500 million. The G. boninense infects both mature trees and seedlings. The current practice of detection still depends on manual inspection by a human expert every two weeks. This study aimed to detect early G. boninense infections using visible-near infrared (VIS-NIR) hyperspectral images where there are no BSR symptoms present. Twenty-eight samples of oil palm seedlings at five months old were used whereby 15 of them were inoculated with the G. boninense pathogen. Five months later, spectral reflectance oil palm leaflets taken from fronds 1 (F1) and 2 (F2) were obtained from the VIS-NIR hyperspectral images. The significant bands were identified based on the high separation between uninoculated (U) and inoculated (I) seedlings. The results indicate that the differences were evidently seen in the NIR spectrum. The bands were later used as input parameters for the development of Support Vector Machine (SVM) classification models, and these bands were optimized according to the classification accuracy achieved by the classifiers. It was observed that the U and I seedlings were excellently classified with 100% accuracy using 35 bands and 18 bands of F1. However, the combination of F1 and F2 (F12) gave better accuracy than F2 and almost similar to F1 for specific classifiers. This finding will provide an advantage when using aerial images where there is no need to separate F1 and F2 during the data pre-processing stage. View Full-Text
Keywords: basal stem rot; hyperspectral; support vector machines; VIS-NIR basal stem rot; hyperspectral; support vector machines; VIS-NIR
►▼ Show Figures 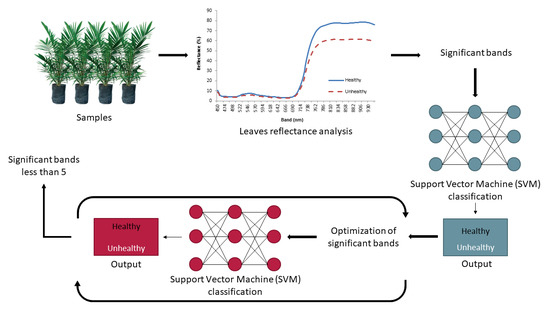