Rye (Secale cereale L.) is one of the most important cereals and is used in both the food and feed industries. It is produced mainly in a belt extending from Russia through Poland to Germany. Despite the great economic importance of this cereal, there is little research on rye contamination with mycotoxins. In this study, the occurrence of Fusarium mycotoxins (deoxynivalenol, nivalenol, 3-acetyl-deoxynivalenol, monoacetoxyscirpenol, diacetoxyscirpenol, T-2 toxin, HT-2 toxin, and zearalenone), as well as ochratoxin A, in 60 winter rye samples of four varieties (KWS Binntto, KWS Serafino, Dańkowskie Granat and Farm Saved Seed) cultivated in three consecutive growing seasons in five different regions of Poland was determined using liquid chromatography with tandem mass spectrometry and fluorescence detection. Deoxynivalenol, T-2 toxin, HT-2 toxin, and zearalenone had the highest occurrence in samples (90%, 63%, 57%, and 45% positive results, respectively). The mean concentrations of these analytes were 28.8 µg/kg (maximum 354.1 µg/kg), 0.98 µg/kg (maximum 6.63 µg/kg), 2.98 µg/kg (maximum 29.8 µg/kg), and 0.69 µg/kg (maximum 10.2 µg/kg), respectively. The mean concentrations for individual mycotoxins were highest in the 2016/2017 growing season. In the 2016/2017 growing season, at least two mycotoxins were detected in 95% of the samples, while in the 2018/2019 growing season, 70% of samples contained one or no mycotoxins. The frequencies of mycotoxin occurrence in different rye varieties were similar. Although a high frequency of mycotoxin occurrence was noted (especially deoxynivalenol), their concentrations were low, and none of the analyzed rye samples exceeded the maximum acceptable mycotoxin level set by the European Commission. View Full-Text
Keywords: winter rye; Fusarium mycotoxins; trichothecenes; ochratoxin A; chromatography; LC-MS winter rye; Fusarium mycotoxins; trichothecenes; ochratoxin A; chromatography; LC-MS
►▼ Show Figures 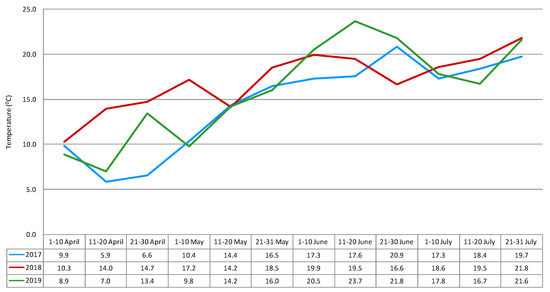