Effect of Ambient pH on Growth, Pathogenicity, and Patulin Production of Penicillium expansum
Next Article in Special Issue

Bites from helodermatid lizards can cause pain, paresthesia, paralysis, and tachycardia, as well as other symptoms consistent with neurotoxicity. Furthermore, in vitro studies have shown that Heloderma horridum venom inhibits ion flux and blocks the electrical stimulation of skeletal muscles. Helodermatids have long been considered the only venomous lizards, but a large body of robust evidence has demonstrated venom to be a basal trait of Anguimorpha. This clade includes varanid lizards, whose bites have been reported to cause anticoagulation, pain, and occasionally paralysis and tachycardia. Despite the evolutionary novelty of these lizard venoms, their neuromuscular targets have yet to be identified, even for the iconic helodermatid lizards. Therefore, to fill this knowledge gap, the venoms of three Heloderma species (H. exasperatum, H. horridum and H. suspectum) and two Varanus species (V. salvadorii and V. varius) were investigated using Gallus gallus chick biventer cervicis nerve–muscle preparations and biolayer interferometry assays for binding to mammalian ion channels. Incubation with Heloderma venoms caused the reduction in nerve-mediated muscle twitches post initial response of avian skeletal muscle tissue preparation assays suggesting voltage-gated sodium (NaV) channel binding. Congruent with the flaccid paralysis inducing blockage of electrical stimulation in the skeletal muscle preparations, the biolayer interferometry tests with Heloderma suspectum venom revealed binding to the S3–S4 loop within voltage-sensing domain IV of the skeletal muscle channel subtype, NaV1.4. Consistent with tachycardia reported in clinical cases, the venom also bound to voltage-sensing domain IV of the cardiac smooth muscle calcium channel, CaV1.2. While Varanus varius venom did not have discernable effects in the avian tissue preparation assay at the concentration tested, in the biointerferometry assay both V. varius and V. salvadorii bound to voltage-sensing domain IV of both NaV1.4 and CaV1.2, similar to H. suspectum venom. The ability of varanid venoms to bind to mammalian ion channels but not to the avian tissue preparation suggests prey-selective actions, as did the differential potency within the Heloderma venoms for avian versus mammalian pathophysiological targets. This study thus presents the detailed characterization of Heloderma venom ion channel neurotoxicity and offers the first evidence of varanid lizard venom neurotoxicity. In addition, the data not only provide information useful to understanding the clinical effects produced by envenomations, but also reveal their utility as physiological probes, and underscore the potential utility of neglected venomous lineages in the drug design and development pipeline. View Full-Text
Keywords: Heloderma; Varanus; venom; Toxicofera; neurotoxic; sodium channel; calcium channel Heloderma; Varanus; venom; Toxicofera; neurotoxic; sodium channel; calcium channel
►▼ Show Figures 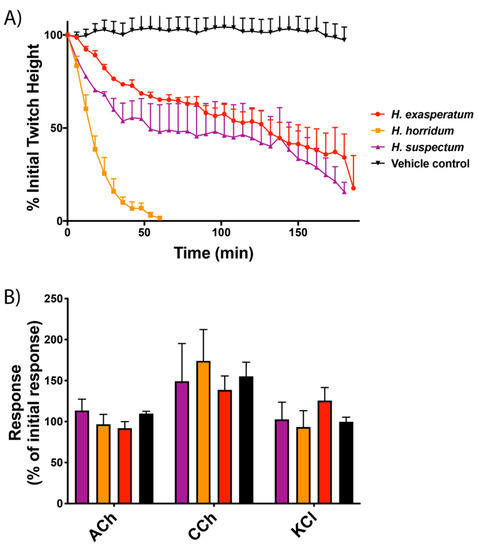