This study aims to investigate the effects of zearalenone (ZEA) on the localizations and expressions of follicle stimulating hormone receptor (FSHR), luteinizing hormone receptor (LHR), gonadotropin releasing hormone (GnRH) and gonadotropin releasing hormone receptor (GnRHR) in the ovaries of weaned gilts. Twenty 42-day-old weaned gilts were randomly allocated into two groups, and treated with a control diet and a ZEA-contaminated diet (ZEA 1.04 mg/kg), respectively. After 7-day adjustment, gilts were fed individually for 35 days and euthanized for blood and ovarian samples collection before morning feeding on the 36th day. Serum hormones of E2, PRG, FSH, LH and GnRH were determined using radioimmunoassay kits. The ovaries were collected for relative mRNA and protein expression, and immunohistochemical analysis of FSHR, LHR, GnRH and GnRHR. The results revealed that ZEA exposure significantly increased the final vulva area (p < 0.05), significantly elevated the serum concentrations of estradiol, follicle stimulating hormone and GnRH (p < 0.05), and markedly up-regulated the mRNA and protein expressions of FSHR, LHR, GnRH and GnRHR (p < 0.05). Besides, the results of immunohistochemistry showed that the immunoreactive substances of ovarian FSHR, LHR, GnRH and GnRHR in the gilts fed the ZEA-contaminated diet were stronger than the gilts fed the control diet. Our findings indicated that dietary ZEA (1.04 mg/kg) could cause follicular proliferation by interfering with the localization and expression of FSHR, LHR, GnRH and GnRHR, and then affect the follicular development of weaned gilts. View Full-Text
Keywords: zearalenone; gilts; ovary; hormone zearalenone; gilts; ovary; hormone
►▼ Show Figures 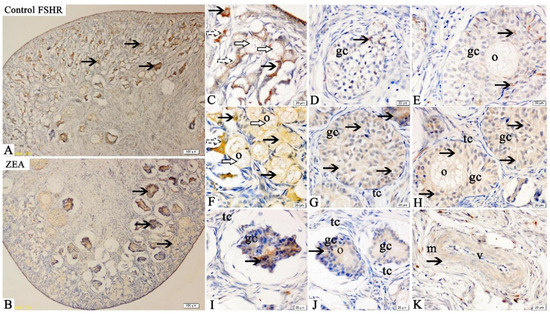