The ability of Bacillus cereus to cause foodborne toxicoinfections leads to increasing concerns regarding consumer protection. For the diarrhea-associated enterotoxins, the assessment of the non-hemolytic enterotoxin B (NheB) titer determined by a sandwich enzyme immunoassay (EIA) correlates best with in vitro cytotoxicity. In general, the regulation of enterotoxin expression of B. cereus is a coordinately-regulated process influenced by environmental, and probably also by host factors. As long as these factors are not completely understood, the currently-applied diagnostic procedures are based on indirect approaches to assess the potential virulence of an isolate. To date, sandwich EIA results serve as a surrogate marker to categorize isolates as either potentially low or highly toxic. Here, we report on a single amino acid exchange in the NheB sequence leading to an underestimation of the cytotoxic potential in a limited number of strains. During the screening of a large panel of B. cereus isolates, six showed uncommon features with low sandwich EIA titers despite high cytotoxicity. Sequence analysis revealed the point-mutation Glu151Asp in the potential binding region of the capture antibody. Application of this antibody also results in low titers in an indirect EIA format and shows variable detection intensities in Western-immunoblots. A commercially-available assay based on a lateral flow device detects all strains correctly as NheB producers in a qualitative manner. In conclusion, isolates showing low NheB titers should additionally be assayed in an indirect EIA or for their in vitro cytotoxicity to ensure a correct classification as either low or highly toxic. View Full-Text
Keywords: Bacillus cereus; non-hemolytic enterotoxin B; Duopath®; point mutation Bacillus cereus; non-hemolytic enterotoxin B; Duopath®; point mutation
►▼ Show Figures 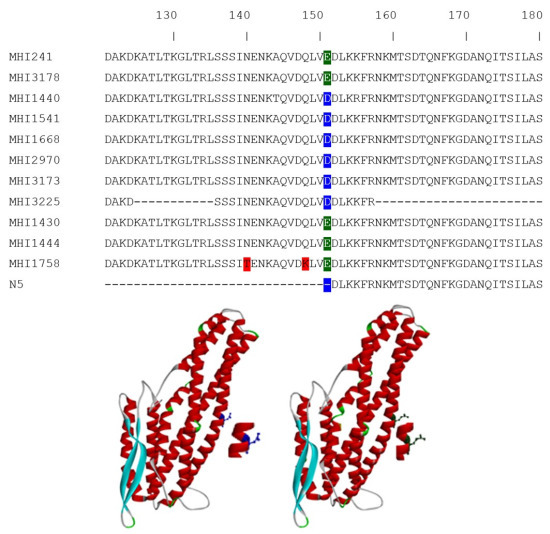