Scutellaria baicalensis Georgi (Lamiaceae) is the source of the well-known traditional Chinese medicine “HuangQin” (Radix Scutellariae). Natural sources of S. baicalensis are rapidly declining due to high market demand and overexploitation. Moreover, the commercial products of Radix Scutellariae have often been found to contain adulterants in recent years, which may give rise to issues regarding drug efficacy and safety. In this study, we developed valuable chloroplast molecular resources by comparing intraspecific and interspecific chloroplast genome. The S. baicalensis chloroplast genome is a circular molecule consisting of two single-copy regions separated by a pair of inverted repeats. Comparative analyses of three Scutellaria chloroplast genomes revealed six variable regions (trnH-psbA, trnK-rps16, petN-psbM, trnT-trnL, petA-psbJ, and ycf1) that could be used as DNA barcodes. There were 25 single nucleotide polymorphisms(SNPs) and 29 indels between the two S. baicalensis genotypes. All of the indels occurred within non-coding regions. Phylogenetic analysis suggested that Scutellarioideae is a sister taxon to Lamioideae. These resources could be used to explore the variation present in Scutellaria populations and for further evolutionary, phylogenetic, barcoding and genetic engineering studies, in addition to effective exploration and conservation of S. baicalensis. View Full-Text
Keywords: Scutellaria baicalensis; chloroplast genome; genomic resource; single nucleotide polymorphisms; microsatellites; indels Scutellaria baicalensis; chloroplast genome; genomic resource; single nucleotide polymorphisms; microsatellites; indels
►▼ Show Figures 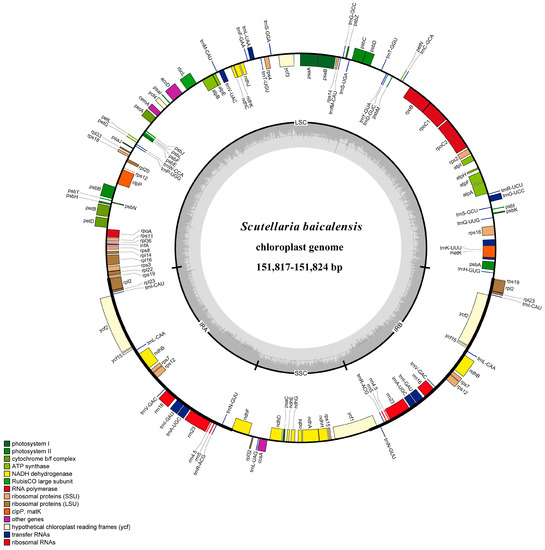