Penicillium digitatum is the major postharvest pathogen of citrus fruit under Mediterranean climate conditions. Previous results have shown that proteases is the largest enzyme family induced by P. digitatum during fruit infection. In the present work, we addressed the study of the role of P. digitatum’s proteases in virulence following two complementary approaches. In the first approach, we undertook the functional characterization of the P. digitatum prtT gene, which codes for a putative transcription factor previously shown to regulate extracellular proteases in other filamentous fungi. Deletion of prtT caused a significant loss in secreted protease activity during in vitro growth assays. However, there was no effect on virulence. Gene expression of the two major secreted acid proteases was barely affected in the ΔprtT deletant during infection of citrus fruit. Hence, no conclusion could be drawn on the role of these secreted acidic proteases on the virulence of P. digitatum. In the second approach, we studied the effect of different protease inhibitors and chelators on virulence. Co-inoculation of citrus fruit with P. digitatum conidia and a cocktail of protease inhibitors resulted in almost a complete absence of disease development. Analysis of individual inhibitors revealed that the metalloprotease inhibitor, 1,10-phenanthroline, was responsible for the observed effect. The application of metal ions reverted the protective effect caused by the metallopeptidase inhibitor. These results may set the basis for the development of new alternative treatments to combat this important postharvest pathogen. View Full-Text
Keywords: Agrobacterium tumefaciens mediated transformation; citrus fruit; metal ion chelators; fruit–fungal interaction; transcription factor; virulence; protease inhibitors Agrobacterium tumefaciens mediated transformation; citrus fruit; metal ion chelators; fruit–fungal interaction; transcription factor; virulence; protease inhibitors
►▼ Show Figures 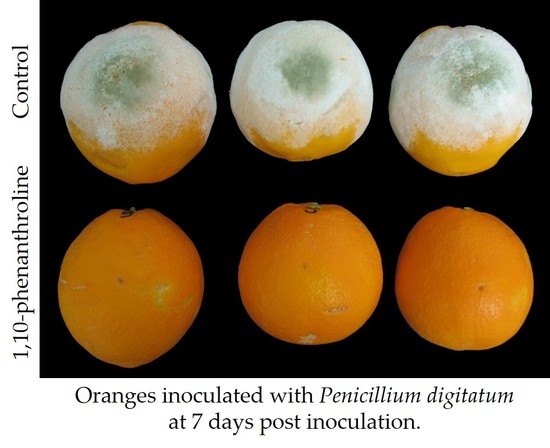