Non-O157 Shiga toxin-producing Escherichia coli (STEC) is an important pathogen that can cause zoonotic diseases. To investigate the antimicrobial resistance of STEC in China, non-O157 STEC isolates, recovered from domestic animals and humans from 12 provinces, were analyzed using antimicrobial susceptibility testing and whole genome characterization. Out of the 298 isolates tested, 115 strains showed resistance to at least one antimicrobial and 85 strains showed multidrug resistance. The highest resistance rate was to tetracycline (32.6%), followed by nalidixic acid (25.2%) and chloramphenicol and azithromycin (both 18.8%). However, imipenem and meropenem were effective against all isolates. Antimicrobial resistance patterns varied among strains from different sources. Strains from pig, sheep, humans, and cattle showed resistance rates of 100.0%, 46.9%, 30.3%, and 6.3% to one or more antimicrobials, respectively. Forty-three genes related to 11 antimicrobial classes were identified among these strains. The colistin-resistance gene mcr was only carried by strains from pigs. A new fosfomycin-resistant gene, fosA7, was detected in strains from humans, cattle, and sheep. Whole genome phylogenetic analysis showed that strains from the four sources were genetically diverse and scattered throughout the phylogenetic tree; however, some strains from the same source had a tendency to cluster closely. These results provide a reference to monitor the emergence and spread of multidrug resistant STEC strains among animals and humans. Furthermore, with a better understanding of antimicrobial genotypes and phenotypes among the diverse STEC strains obtained, this study could guide the administration of antimicrobial drugs in STEC infections when necessary. View Full-Text
Keywords: Shiga toxin-producing Escherichia coli; STEC infection; antimicrobial drugs; multidrug resistance; whole genome sequencing Shiga toxin-producing Escherichia coli; STEC infection; antimicrobial drugs; multidrug resistance; whole genome sequencing
►▼ Show Figures 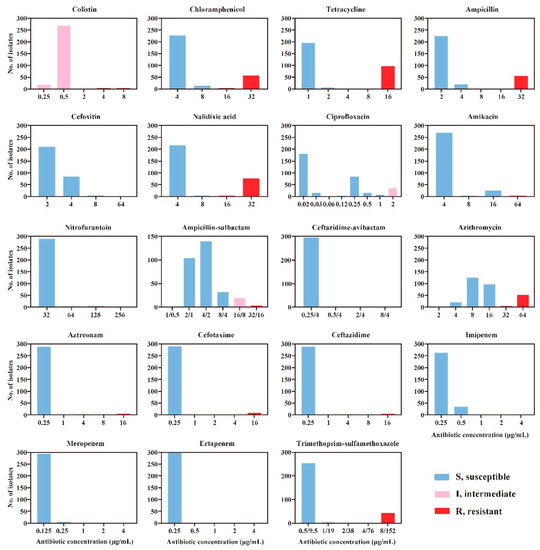