Immune suppressed renal transplant patients are more prone to developing oral tissue alterations due to medications associated with a pleiotropic set of side effects involving the oral cavity. Drug-induced gingival overgrowth (DIGO) is the most commonly encountered side effect resulting from administration of calcineurin inhibitors such as cyclosporine-A (CsA), the standard first-line treatment for graft rejection prevention in transplant patients. Pathogenesis of gingival overgrowth (GO) is determined by the interrelation between medications and a pre-existing inflammatory periodontal condition, the main modifiable risk factor. Severity of gingival hyperplasia clinical manifestation is also related to calcium channel blocker association, frequently provided in addition to pharmacological therapy of transplant recipients. Specifically, nifedipine-induced enlargements have a higher prevalence rate compared to amlodipine-induced enlargements; 47.8% and 3.3% respectively. Available epidemiological data show a gender difference in prevalence, whereby males are generally more frequently affected than females. The impact of GO on the well-being of an individual is significant, often leading to complications related to masticatory function and phonation, a side effect that may necessitate switching to the tacrolimus drug that, under a similar regimen, is associated with a low incidence of gingival lesion. Early detection and management of GO is imperative to allow patients to continue life-prolonging therapy with minimal morbidity. The purpose of this study was threefold: firstly, to determine the prevalence and incidence of GO under the administration of CsA and Tacrolimus; secondly, to assess the correlation between periodontal status before and after periodontal therapy and medications on progression or recurrence of DIGO; and finally, to analyse the effect of immunosuppressant in association to the channel blocker agents on the onset and progression of gingival enlargement. We compared seventy-two renal transplant patients, including 33 patients who were receiving CsA, of which 25% were also receiving nifedipine and 9.72% also receiving amlodipine, and 39 patients who were receiving tacrolimus, of which 37.5% were also receiving nifedipine and 5.55% also receiving amlodipine, aged between 35 and 60 years. Medical and pharmacological data were recorded for all patients. Clinical periodontal examination, in order to establish the inflammatory status and degree of gingival enlargement, was performed at baseline (T0), 3 months (T1), 6 months (T2), and 9 months (T3). All patients were subjected to periodontal treatment. Statistically significant correlation between the reduction of the mean value of periodontal indices and degree of gingival hyperplasia at the three times was revealed. The prevalence of GO in patients taking cyclosporine was higher (33.3%) in comparison with those taking tacrolimus (14.7%). In accordance with previous studies, this trial highlighted the clinical significance of the pathological substrate on stimulating drug-induced gingival lesion, confirming the key role of periodontal inflammation in pathogenesis of gingival enlargement, but did not confirm the additional effect of calcium-channel blocker drugs in inducing gingival enlargement. View Full-Text
Keywords: periodontitis; oral pathogens; periodontal inflammation; drug-induced gingival overgrowth (DIGO); immunosuppressant; cyclosporine-A; Tacrolimus calcium channel blockers; sepsis; kidney transplantation periodontitis; oral pathogens; periodontal inflammation; drug-induced gingival overgrowth (DIGO); immunosuppressant; cyclosporine-A; Tacrolimus calcium channel blockers; sepsis; kidney transplantation
►▼ Show Figures 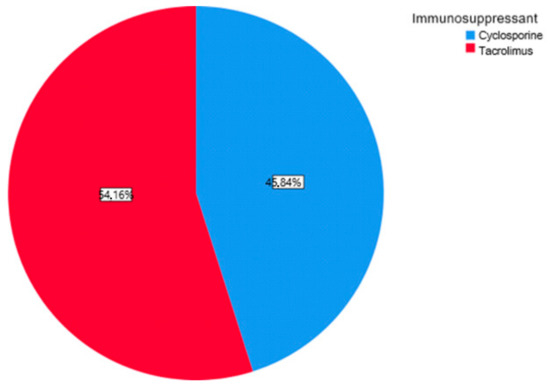