Goat milk has been frequently implicated in staphylococcal food poisoning. The potential risk of raw goat milk contaminated by Staphylococcus aureus (S. aureus) in Shaanxi province of China is still not well documented. This study investigated the prevalence, antibiotic resistance, as well as virulence-related genes of S. aureus from raw goat milk samples in Shaanxi, China. A total of 68 S. aureus isolates were cultured from 289 raw goat milk. Most of the isolates were resistant to penicillin and oxacillin, although 41.18%, 33.82%, and 29.41% of the isolates expressed resistance to piperacillin, trimethoprim-sulfamethoxazole, and ciprofloxacin, respectively. Our data demonstrated that 91.18% of the isolates produced biofilm, of which 54.41% isolates belonged to high-biofilm producers. In addition, genotypic analysis of biofilm related genes (fnbA, clfB, fnbB, cna) revealed that 91.18% of the isolates harbored at least one of the genes, in which the most prevalent genes were fnbA (66. 17%), clfB (48.53%), and fnbB (26.47%). 94.8% of the isolates contained at least one toxin-related gene, of which seb (76.47%), tsst (36.76%), and sea (23.53%) genes were the more frequently detected. Further analysis revealed a positive association between fnbA, clfB, fnbB, seb, tsst, and sea genes and certain antibiotic resistance. The results indicated that raw goat milk samples contaminated by S. aureus can be a potential risk to public health.
Keywords: Staphylococcus aureus; raw goat milk; antimicrobial susceptibility; biofilm; virulence gene Staphylococcus aureus; raw goat milk; antimicrobial susceptibility; biofilm; virulence gene

Staphylococcus aureus (S. aureus) is a Gram-positive pathogen that can be isolated from a wide range of food, animal, human, and medical environments. Recently, microbial food poisoning accounted for 53.7% of the food poisoning incidents in China, of which S. aureus is one of the most commonly identified foodborne pathogens that causes a wide range of clinical infections [1]. S. aureus has been described to contaminate various foods such as chicken, fish, dairy products, sushi, and sashimi [2,3,4,5,6], and thus constitutes a risk for consumer health. In addition, in the dairy industry, S. aureus can be introduced at almost each step of the production process, and therefore staphylococcal food poisoning caused by S. aureus has also been highlighted by the dairy industry [7].
S. aureus is a highly versatile bacterium adapting to hostile environments, which was inseparably associated with its ability to form structures known as biofilms [8,9]. A biofilm is defined as an assemblage of microbial cells that irreversibly attaches to a surface and enclosed in a matrix of hydrated extracellular polymeric substances [10]. Biofilm development of S. aureus consists of a three-stage process of deeply wired genetic developmental process triggered by stress signals, including (i) attachment of cells to surface, (ii) maturation of the biofilm, and (iii) detachment/dispersal [11,12]. The initial attachment to abiotic or biotic surfaces for biofilm formation involves numerous surface-anchored proteins such as biofilm-associated protein (bap), collagen-binding proteins (cna), clumping factors A and B (clfA, clfB), as well as fibronectin-binding proteins A and B (fnbA, fnbB), which are collectively termed as microbial surface components recognizing adhesive matrix molecules (MSCRAMM) [13,14,15,16], providing a critical step to establish infections. Accumulation/maturation of biofilm is mediated by the polysaccharide intercellular adhesin encoded by the icaABCD gene cluster [13]. S aureus cells growing in a biofilm are physiologically distinct from planktonic cells, which improve their survival and growth during food processing, thereby establishing a competitive advantage for S. aureus as an etiological agent of foodborne infectious diseases [15]. Biofilms are very difficult to eliminate once they have been established. Furthermore, biofilms physically limit access of antibacterial agents to bacteria. Therefore, bacteria within biofilms are up to 10–1000 times more resistant to antimicrobials than if they were planktonic cells without biofilms [17].
Staphylococcal food poisoning is directly associated with toxins and invasive enzymes produced by S. aureus such as staphylococcal enterotoxin (SE), toxic shock syndrome toxin-1 (TSST-1), and Panton-Valentine leucocidyn (PVL) [18]. Twenty-three types of SEs (Sea-See and Seg-Sev) have been described [19]. SE is divided into five classical serological types (Sea, Seb, Sec, Sed and See), and more than 90% of S. aureus-associated food poisoning outbreaks were associated with these classic SEs [20]. Additionally, TSST-1 toxin can lead to toxic shock syndrome by reducing host immune response, and PVL can cause tissue necrosis by destroying host leukocytes [21]. Other SEs (Seg-Seu) were also detected and have been implicated in staphylococcal food poisoning [22].
Foodborne outbreaks of S. aureus intoxications have been documented to be associated with consumption of contaminated milk [23,24]. Goat milk is the third largest source of dairy production in the world, accounting for 2.07% of the total milk. The top goat milk producing countries in the world are as follows: India, Bangladesh, Pakistan, and Sudan. China is rich in goat milk, in which Shaanxi province is one of the main sources of goat milk in the Chinese market [25]. With the gradual popularization of goat milk, raw goat milk might be a potential source of staphylococcal food poisoning caused by S. aureus. However, only a few studies have been performed on S. aureus prevalence and contamination levels in raw goat milk in China [26]. Meanwhile, there are a paucity of data regarding SE gene distribution and biofilm formation ability of S. aureus isolates from raw goat milk samples in Shaanxi province, China. This study aims to investigate S. aureus contamination in raw goat milk in Shaanxi province, China. For this purpose, we analyzed the prevalence, contamination levels, antibiotic susceptibility profiles, virulence genes, biofilm formation, and biofilm-related genes of the S. aureus isolates obtained from Shaanxi province, China.

2.1. Isolation and Identification of S. aureus

2.6. The Association between Biofilm Formation and Biofilm-Related Genes

In the present study, there were a significant association between the presence of fnbA (p < 0.001), clfB (p < 0.05), along with fnbB (p < 0.05) genes and biofilm formation in S. aureus isolates. Nonetheless the association between cna gene and biofilm formation were not observed (p > 0.05). In addition, the fnbA, clfB, fnbB, and cna genes were simultaneously detected in 5 (7.4%, 5/68) isolates, of which 4 isolates were biofilm producers. Five (7.4%, 5/68) tested isolates were negative for fnbA, clfB, fnbB, and cna, and only one isolates formed biofilms.

2.7. The Relationship between Antibiotic Resistance and Biofilm-Related Genes

2.8. The Relationship between Antibiotic Resistance and Virulence Genes

4.1. Isolation and Identification of Strains

A total of 289 raw goat milk samples were collected from three goat farms during 2016 to 2017 in Shaanxi province, China. Raw milk samples were collected from goats. One milk sample from each goat was collected. The S. aureus contamination was detected using the most probable number (MPN) method in raw goat milk samples according to National Food Safety Standards of China document GB 4789.10-2016. Briefly, 25 ml milk sample was taken and transferred into 225 mL 10% (w/v) saline solution, and further culture was streaked onto Baird–Parker Agar supplemented with 5% egg yolk and blood agar with sterile defibrinated sheep blood (Land Bridge, Beijing, China), respectively, then incubated at 37 °C for 48 h, the total number of colonies on each plate was counted. Finally, all isolates were subjected to the detection of 16S rRNA. All confirmed S. aureus isolates were stored in tryptic soy broth (TSB) with glycerol at −80 °C. No more than two isolates of each sample were chosen for subsequent studies.

The microtiter plate assay for investigating biofilm formation is a means which permits the observation of bacterial adherence to an abiotic surface. Slightly, after overnight incubation in TSB, 200 μL of cell suspension (approximately 1 × 108 CFU/mL) was diverted into each well and incubated at 37 °C for further 24 h. After three washes with PBS (0.01 mol/L, pH 7.4) and a 20-min fixation step with 100% methanol, dyed with 0.4% (w/v) crystal violet (CV) for 15 min and washed with PBS (0.01 mol/L, pH 7.4). Bound crystal violet was then dissolved with 33% acetic acid for 30 min. The biofilm was measured at 580 nm of OD in a microplate reader (Thermo Fisher Scientific, Finland). The biofilm assays were performed in triplicate. According to the critical ODc value, the biofilm is divided into the following four categories: OD ≤ ODc of non-biofilm producers, ODc < OD ≤ 2 ODc of low-biofilm producers, 2 ODc < OD ≤ 4 ODc of medium-biofilm producers, and OD > 4 ODc of high-biofilm producers.

For visualization of biofilms, biofilms were further observed by a scanning electron microscope (SEM, phenom pro, Thermo Fisher Scientific, Netherlands). After overnight growth of S. aureus, 1 mL of cell suspension (approximately 1 × 108 CFU/mL) was transferred into a 24-well plate containing coated glass coverslips, cultured at 37 °C for another 48 h, and fixed with 2.5% glutaraldehyde-PBS solution for 2 h at 4 °C. The coated glass coverslips were then dehydrated in a series of washes with 30, 50, 70, 90% ethanol for 10 min each, followed by 15 min rinses in 100% ethanol. Air-dried samples were immediately sputter-coated with platinum and SEM analysis was performed.
Confocal laser scanning microscopy (CLSM, LSM800, Carl Zeiss AG, Germany) was performed to observe more clearly the biofilm of S. aureus. Bacteria biofilms were prepared using the same methods as described above. The isolates were removed from the medium and gently rinsed with 0.9% to remove medium and unattached cells. The cells were then stained with carboxyfluorescein diacetate succinimidyl ester (CFDA-SE, Beyotime, China) for 10–15 min. Cells were visualized and photographed using CLSM. The excitation/emission wavelength was 488/542 nm.

In summary, our study provides an epidemiological investigation of the prevalence of S. aureus in raw goat milk in Shaanxi province, China. This study indicates a high prevalence of S. aureus with virulence genes and biofilm forming ability that might lead to the persistence of S. aureus in goat farms contributing to serious infections and subsequent food poisoning. To the best of our knowledge, our results firstly found a significantly positive correlation between biofilm related gene as well as virulence gene and antibiotics resistance. The results provide potential alternative monitoring measures by gene detection to eliminate and reduce the contamination of S. aureus in raw goat milk.

This research was funded by the National Natural Science Foundation of China (11575149), the Key Research and Development Project of Shaanxi Province (2019NY-004, 2019JM-184), and the Industry Cultivation Project of Education Department of Shaanxi Provincial Government [18JC006, 18JK0097]. 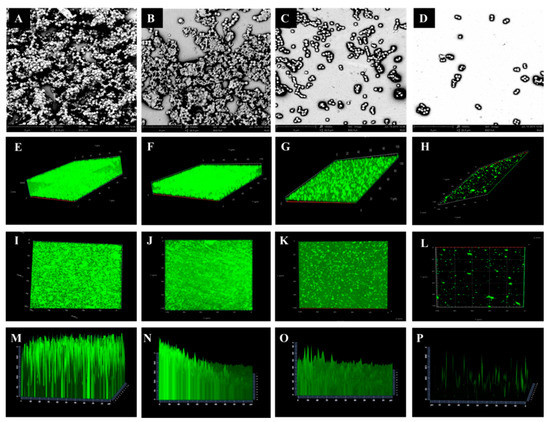 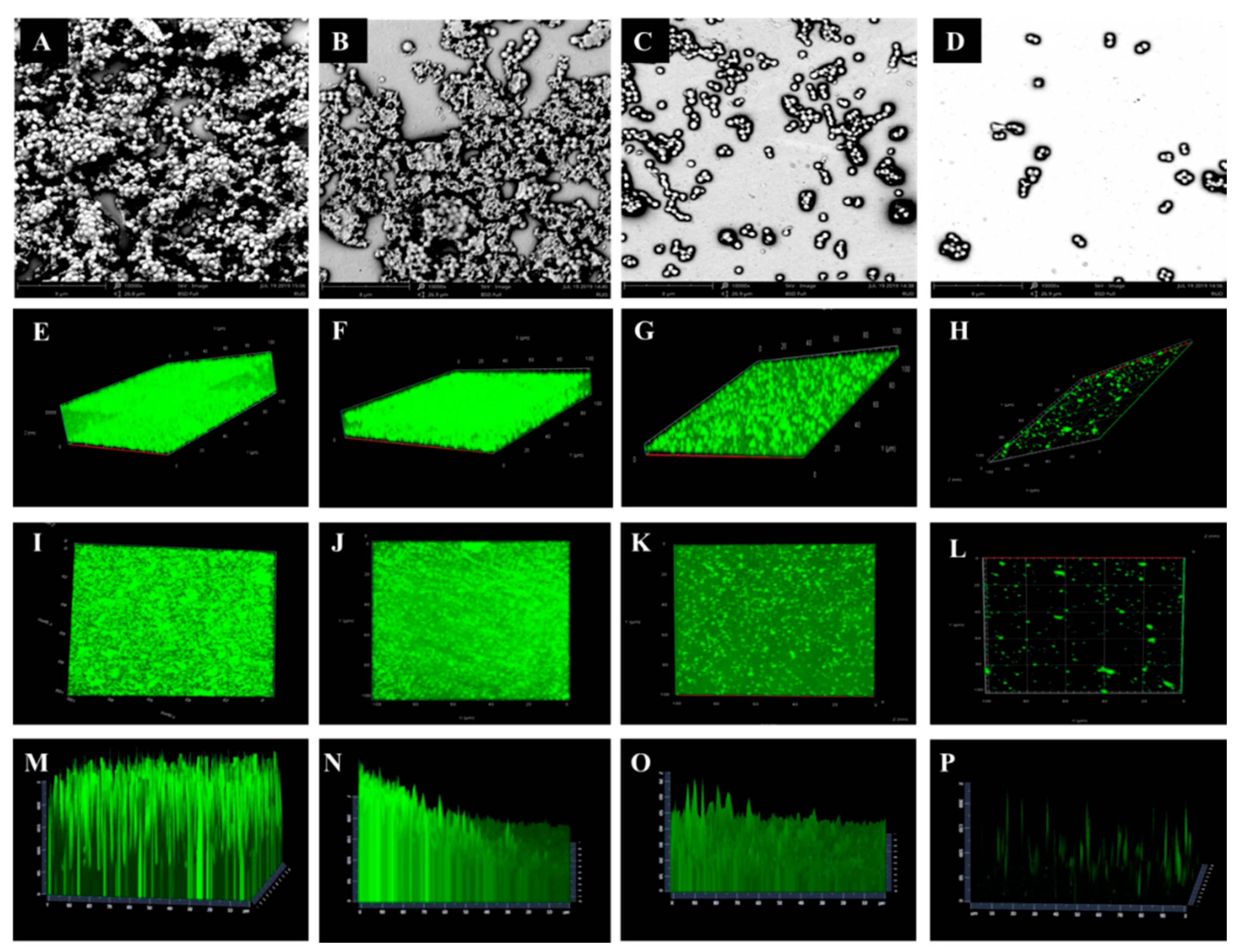 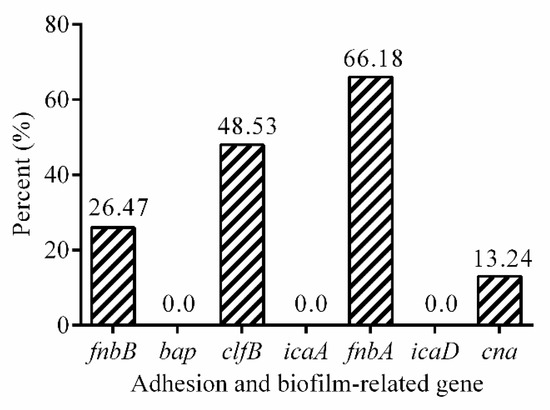 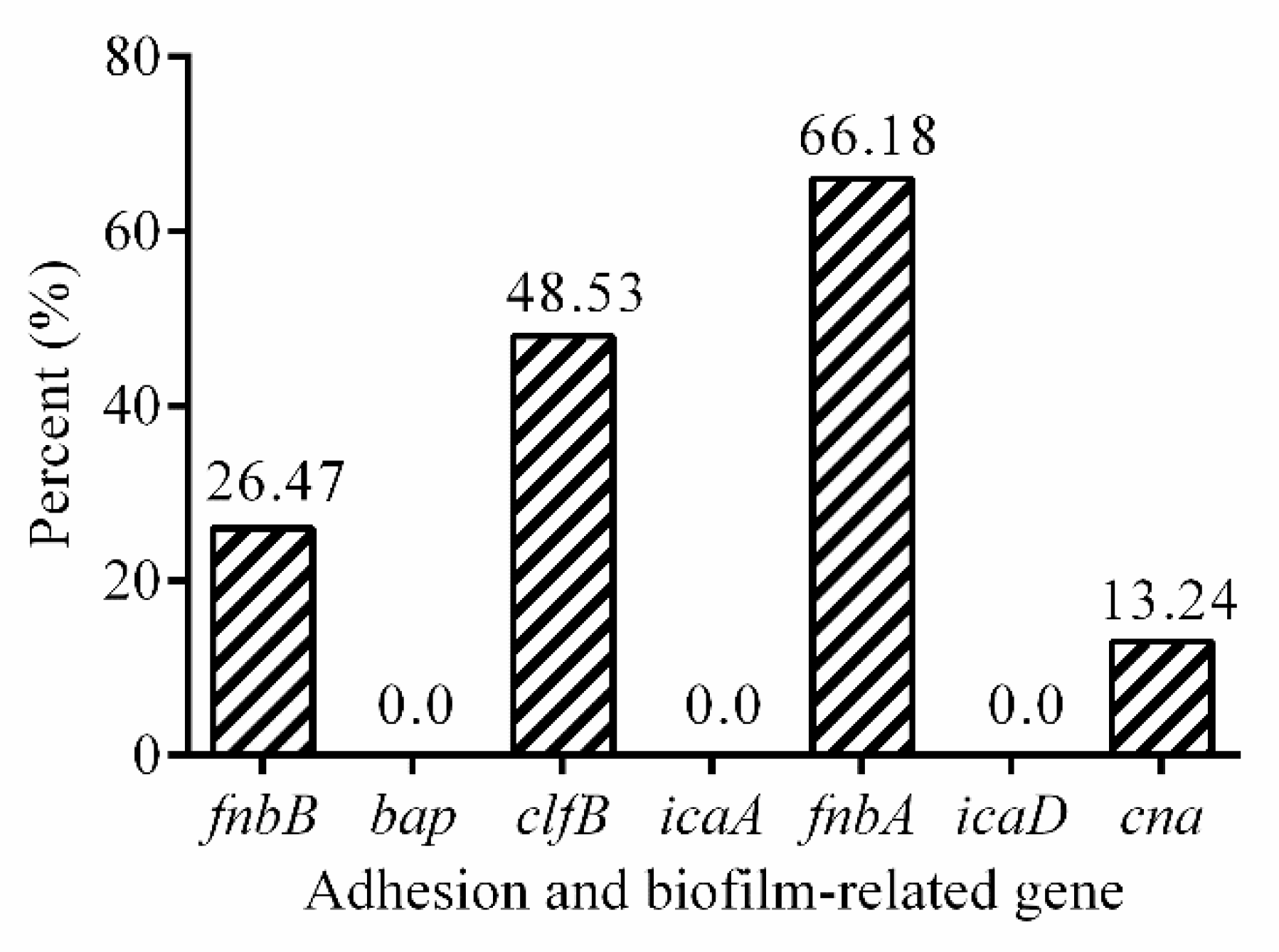 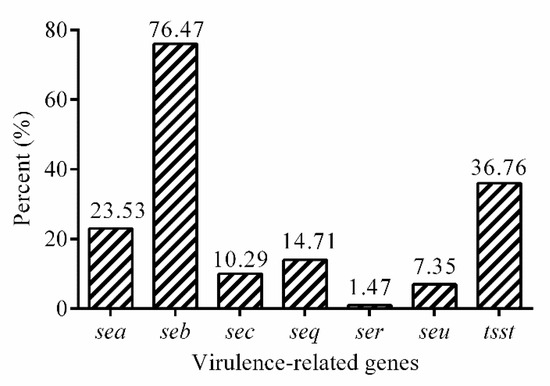 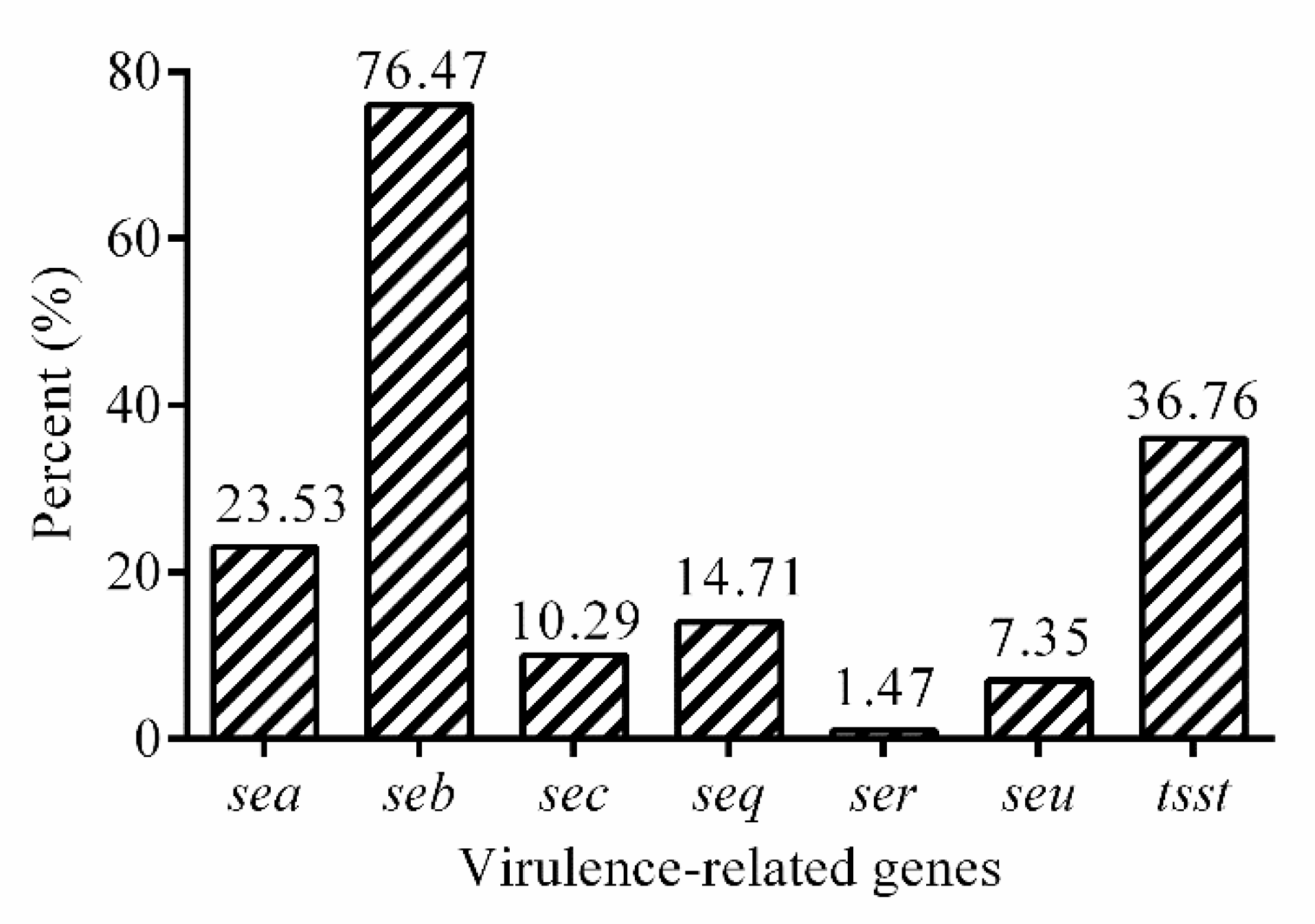