Exploring the Relationship between the Arid Valley Boundary’s Displacement and Climate Change during 1999–2013 in the Upper Reaches of the Min River, China
Previous Article in Journal

Ningbo City in Zhejiang Province is one of the largest port cities in China and has achieved high economic development during the past decades. The port construction, land reclamation, urban development and silt deposition in the Ningbo coastal zone have resulted in extensive coastline change. In this study, the spatio-temporal change of the Ningbo coastlines during 1976–2015 was detected and analysed using Landsat time-series images from different sensors, including Multispectral Scanner (MSS), Thematic Mapper (TM), Enhanced Thematic Mapper Plus (ETM+) and Operational Land Imager (OLI). Fourteen individual scenes (covering seven phases) of cloud-free Landsat images within the required tidal range of ±63 cm were collected. The ZiYuan-3 (ZY-3) image of 2015 was used to extract the reference coastline for the accuracy assessment. The normalised difference water index (NDWI) and the modified normalized difference water index (MNDWI) were applied to discriminate surface water and land features, respectively. The on-screen digitising approach was then used to further refine the extracted time-series coastlines in the period from 1976 to 2015. Six relevant indices, length, length change, annual length change, fractal dimension (FD), average net shoreline movement (NSM) and average annual NSM, were calculated to analyse and explore the spatio-temporal change features of Ningbo coastlines. Results show that the length of the Ningbo coastlines increased from 910 km to 986 km, and the value of FD increased from 1.09 to 1.12, and the coastline morphology changed from sinuous to straight. The average NSM increased from 187 m to 298 m and the average annual NSM reached 85 m/year, indicating the advance of coastlines towards the sea at a high level. The spatio-temporal change patterns also varied in different areas. In Hangzhou Bay, significant advancement along the coastlines was experienced since 2001 mainly because of urban construction and land reclamation. In Xiangshan Bay, the forces of nature played a major role in coastline dynamics before 2008, whilst port construction, urban construction and island link projections moved the coastlines towards the sea. The coastline changes of Sanmen Bay were affected by the interaction of nature and human activities. All these observations indicate that forces of nature and human activities were the two important influential factors for the observed coastline change. In this case, the coastline complexity variation was considered responsible for various coastline patterns change of the Ningbo coast. In addition, erosion and accretion occurred in turn because of forces of nature and human activities, such as urban development and agricultural exploitation. View Full-Text
Keywords: coastline change; spatio-temporal pattern; Ningbo; Landsat; normalized difference water index coastline change; spatio-temporal pattern; Ningbo; Landsat; normalized difference water index
►▼ Show Figures 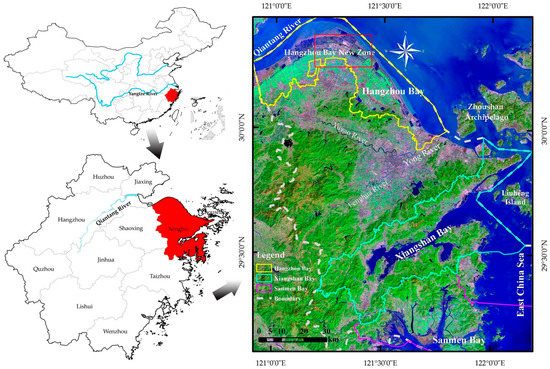