The Role of Probiotics and Synbiotics on Hirsutism

The control of the immune system of pigs after weaning is important in pig farming because productivity depends on the survival of the post-weaned pigs. Previously, antibiotics would have been administered in the case of infectious diseases to increase the survival rate of post-weaned pigs, but now, the use of antibiotics is strictly restricted in order to prevent other problems such as the occurrence of antibiotic-resistant pathogens. In this study, the effect of fermented kefir as a functional feed additive as a replacement to antibiotics was evaluated in terms of the microbial profile in fecal samples, immunological factors in the blood of pigs, growth performance measured as average daily gain (ADG) and the feed conversion rate (FCR) of post-weaned pigs. In the kefir-treated group, the number of lactic acid bacteria and Bacillus spp. in the fecal samples of the pigs increased with the kefir treatments. Interestingly, the number of coliform groups as opportunistic pathogens was reduced in the fecal samples of pigs treated with kefir. We found out that treatment with kefir enhanced the innate immunity of post-weaned pigs though the reduction of IL-6 as a proinflammatory cytokine and an increase in IgG as an immunoglobulin, enhancing immunological defense against pathogens. Finally, after treatment with kefir, we observed that the ADG of post-weaned pigs increased to 135.6% but FCR decreased to 92.2%. Therefore, this study shows that fermented kefir can be used as a functional feed additive and an antibiotic alternative in order to improve both the innate immune system and growth performance of post-weaned pigs. View Full-Text
Keywords: fermented kefir; post-weaned pig; innate immune system; growth performance; functional feed additive fermented kefir; post-weaned pig; innate immune system; growth performance; functional feed additive
►▼ Show Figures 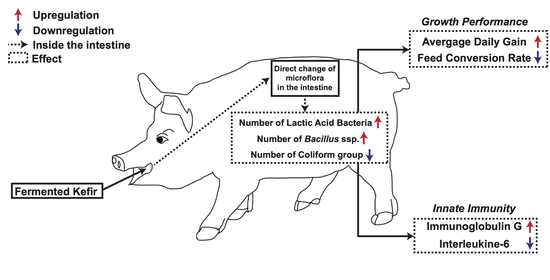