River Systems and the Anthropocene: A Late Pleistocene and Holocene Timeline for Human Influence
Previous Article in Special Issue

Jonathan A. Florentin
1,2 and

At 37°24′ N 22°8′ E, the Megalopolis Basin lies in the central Peloponnese Peninsula, southwestern Greece. In the Megalopolis Basin at ~350 m amsl, the Paleolithic site, Marathousa 1, sits within a palustrine/lacustrine clastic package between Lignite Seams III and II, that both likely correlate with interglacial periods. At Marathousa 1, immediately below Lignite Seam III, lies a clayey-silty sand layer with a horizon rich in molluscs ranging from ~20–40 cm thick. About 0.8–1.3 m below the shell-rich horizon (SRH), lacustrine silty to muddy sands rich in organic matter yielded Paleolithic lithic artefacts associated with Middle Pleistocene fauna, some with cut marks and possible bone knapping, found within palustrine/lacustrine clastic deposits. Since ESR (electron spin resonance) can date teeth and molluscs aged >2 Ma, two bivalve samples, AM66 and AM65, five subsamples from a cervid molar, AT39, and one subsample from another cervid molar, AT68, were independently dated by ESR from Marathousa 1. To calculate the ages, time-averaged cosmic and time- and volumetrically-averaged sedimentary dose rates were calculated using past water depths and sedimentation rates as determined from paleontological and geological criteria. Found in the SRH in Layer UA2, AM66 and AM65 averaged 488 ± 37 ka, which correlates with MIS 13a. Because the bivalves sat stratigraphically above the artefacts and mammalian fossils, their ages constrain the ESR ages for the teeth deposited below. Lying on the unconformity at the base of Layer UA3c with UA4, and its correlative unconformity at the Layer UB4c/UB5 boundary, sat the dated teeth from large mammals. Because the bones in the Palaeoloxodon antiquus skeleton lay in quasi-anatomical association, the likelihood for fossil reworking on the Layer UB3c/UB4 surface is low. Isochron analysis suggests that using a U uptake model with p = 2 provides the most accurate ages for AT39. With p = 2, AT39 dates to 503 ± 13 ka, while AT68 dates to 512 ± 34 ka. Nonetheless, two to three more teeth and molluscs should be dated to confirm these ages, when more samples suitable for ESR dating are found. Both tooth ages correlate well with early MIS 13, an interglacial period with cooler mean global temperatures compared to MIS 11 or 9. Assuming that the archaeological site formed in one event, rather than as a palimpsest, the data suggest that hominins processed elephant and other faunal carcasses along the shores of a shallow lake or marsh in the Megalopolis Basin at 503 ± 12 ka. Between the two horizons dated here, their sedimentation rate averaged 4.8 ± 1.8 to 7.8 ± 2.9 cm/ka. View Full-Text
Keywords: Marathousa 1; Greece; ESR (electron spin resonance) dating enamel; ESR (electron spin resonance) dating molluscs; Early Paleolithic archaeology; MIS (Marine Oxygen Isotope Stage) 13; mammalian paleontology Marathousa 1; Greece; ESR (electron spin resonance) dating enamel; ESR (electron spin resonance) dating molluscs; Early Paleolithic archaeology; MIS (Marine Oxygen Isotope Stage) 13; mammalian paleontology
►▼ Show Figures 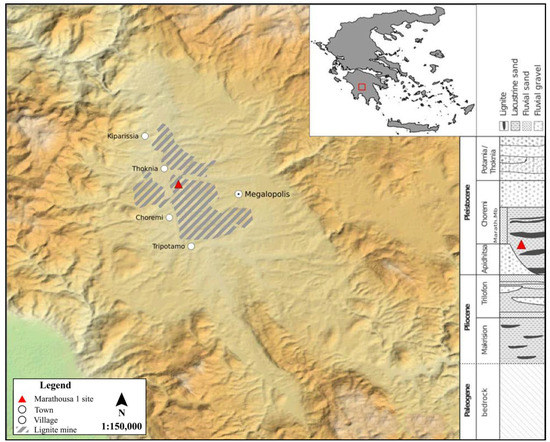