Metagenomic analysis is the comprehensive study of DNA using clinical specimens of organisms including bacteria, fungi, and viruses. In this study, we investigated the efficacy of metagenomic analysis for diagnosing ocular infections, including 11 keratitis cases, four iridocyclitis cases, and one endophthalmitis case. Corneal scraping, aqueous humor, and vitreous humor, were collected respectively. Ocular specimens were used for bacterial and fungal culture, and PCR for detecting viral DNA. Shotgun metagenomic sequencing for 150 bases of single end was performed by Illumina MiSeq® System. Sequence was retrieved from the database at NCBI using a MegaBLAST search. Since Propionibacterium spp. are commensal bacteria found at the ocular surface, they were excluded from analysis. Six cases (37.5%) were positive for culture or PCR. Metagenome techniques revealed that 9 cases (56.3%) included genomes of organisms that were considered pathogenic in specimens. Five cases (31.3%) possessed genomes of organisms like themselves that were detected by culture and PCR. Six cases (37.5%) were negative for culture, PCR, and metagenome analysis. Moreover, viral pathogens (HSV-1, 2 cases; and VZV, 1 case) were detected by only metagenome analysis. Metagenome analysis using an ocular sample can detect microbial genome comprehensively, and viral pathogens, which were not detected by conventional examination. View Full-Text
Keywords: metagenome; detection; bacteria; virus; fungi; keratitis metagenome; detection; bacteria; virus; fungi; keratitis
►▼ Show Figures 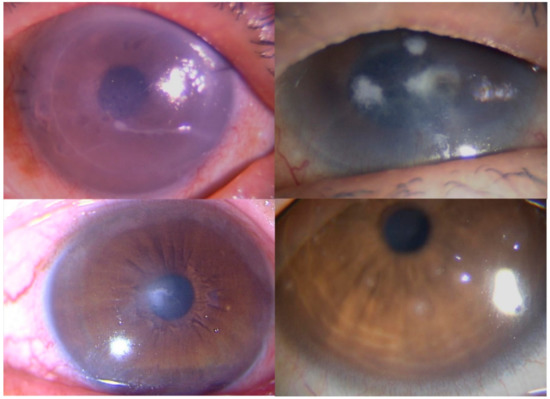