COVID-19 Epidemic in Bangladesh among Rural and Urban Residents: An Online Cross-Sectional Survey of Knowledge, Attitudes, and Practices
Previous Article in Special Issue

Factors and Inequality of Underweight and Overweight among Women of Reproductive Age in Myanmar: Evidence from the Demographic Health Survey 2015–2016

Management of Diabetes Mellitus in Refugee and Migrant Patients in a Primary Healthcare Setting in Greece: A Pilot Intervention

Anastasia I Kolomvotsou
1,* and

Over the past years there is a substantial wave of migrants and refugees all over the world. Europe accepts approximately one-third of the international migrant population with Greece, in particular, having received large numbers of refugees and migrants by land and sea since the beginning of the civil war in Syria. Diabetes, a non-communicable disease, is a global health problem, affecting people in developing countries, refugees and migrants, and its basic treatment tool includes self-management and education. In this pilot study, we organized educational, interactive group sessions for diabetic refugees, based on culture, health, and nutritional needs according to a questionnaire developed for the study. The sessions were weekly, for two months, in the context of primary healthcare, organized by a dietitian. Nine individuals completed the sessions, five of nine were diagnosed in Greece and seven of nine needed diabetes education. Their waist circumference was above normal and they were all cooking at home. Their nutritional habits improved by attending the sessions and the interaction helped their social integration. They all found the sessions useful, and felt more self-confident regarding diabetes control and healthier. View Full-Text
Keywords: refugees; diabetes; self-management; group sessions; nutrition; primary healthcare refugees; diabetes; self-management; group sessions; nutrition; primary healthcare
►▼ Show Figures 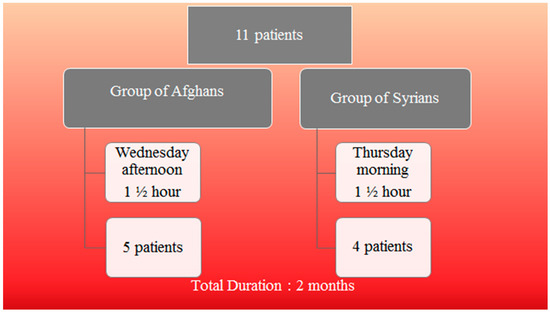 
Kolomvotsou, Anastasia I., and Elena Riza. 2021. "Management of Diabetes Mellitus in Refugee and Migrant Patients in a Primary Healthcare Setting in Greece: A Pilot Intervention" Epidemiologia 2, no. 1: 14-26. https://0-doi-org.brum.beds.ac.uk/10.3390/epidemiologia2010002