Background: Complex regional pain syndrome (CRPS) is a neurologic condition that can present with severe pain and dysfunction. Delay in treatment adversely affects outcomes. The purpose of this study is to evaluate patient outcomes as they relate to the time from diagnosis to pain management referral once the diagnosis of CRPS has been made in a closed healthcare system. Methods: A retrospective record review from a closed healthcare system was utilized for CRPS cases from 2010–2019. Demographics, injury pattern, surgeries, pain score, treatment modalities, occupational outcomes, and time to pain management referral were recorded. Results: There were 26 cases of CRPS that met inclusion criteria. The mean time from diagnosis to treatment was 55 days. 16/26 (61.5%) were medically discharged from the military. 23/26 (88.5%) were unable to return to full duty due to CRPS. There was no significant difference in the reported pain scores over time regardless of treatment (p = 0.76). A linear regression demonstrated a significantly higher Visual Analog Scale Pain Score (VAS) over time in patients that were medically discharged (p = 0.022). Conclusions: The mean delay in referral to the pain service was 55 days. The majority of patients (88.5%) did not return to full duty secondary to the diagnosis of CRPS, and 61.5% of patients required medical separation from active duty. Due to the negative impact that the diagnosis of CRPS has on occupational outcomes with a mean delay in referral of 55 days, clinics and providers should set up referral criteria and establish early pain pathways for patients diagnosed with CRPS.
Keywords: CRPS; pain management; complex regional pain syndrome CRPS; pain management; complex regional pain syndrome

Complex regional pain syndrome (CRPS) is a chronic neurologic condition of the extremities that can present with severe pain and nerve dysfunction including motor, sensory, and autonomic changes [1]. CRPS can be associated with trauma or elective surgery to the upper and lower limbs. In Type 1 CRPS, the injury or surgery does not directly damage the affected nerves. In Type 2 CRPS, there is a distinct injury to the nerve [2]. Despite the differing events that lead to CRPS, the symptoms are largely the same and can include swelling, stiffness, changes in coloration of the extremity, changes in temperature, and intense burning pain. Treatment for CRPS involves multimodal pain management utilizing corticosteroids, nonsteroidal anti-inflammatory medications (NSAIDs), and free radical scavengers (dimethylsulphoxide or N-acetylcysteine) during the early stages of CRPS. Gabapentin, vasodilatory medications, physiotherapy, and sympathetic nerve blocks have also been used in the management of symptoms [3,4,5]. Narcotic pain medications have been found to be of little value in the care of CRPS [6]. The use of Vitamin C may also play a role in preventing the development of CRPS [7,8]. Early diagnosis and referral to physical therapy, occupational therapy, and chronic pain management is recommended to improve patient outcomes [9,10,11].
While early treatment and referral has been recommended, current practice management and referral trends are largely unknown. As it is a largely closed system, the Military Healthcare System provides an appropriate dataset from which management trends can be evaluated. The time from diagnosis to pain management referral within the military medical system is unknown. The rate of active-duty retention for military members with CRPS is currently unknown. The purpose of this study is to evaluate patient outcomes in relation to referral patterns in the treatment of CRPS.

This project was reviewed by the Tripler Army Medical Center IRB and approved as a quality improvement study. The military EMR (electronic medical record), AHLTA, was searched for all patients with ICD-9 codes 337.21 and 337.22 for reflex sympathetic dystrophy of the upper and lower limbs from 2010–2019 at a single institution. Minors and dependents were excluded from the study. Only active-duty service members with complete medical records were included in this study. Retirees that were diagnosed with CRPS after their service obligation were excluded, as there was the potential for medical visits outside of the military healthcare system for that population. Cases were reviewed using Budapest criteria [12,13]. Demographic information was collected to include the type of injury or surgery, date of injury or surgery, type and length of immobilization, visual analog pain score (VAS) at the time of diagnosis, referral to pain management, initial evaluation by pain management, and follow-up. The time from injury to CRPS diagnosis and the time from diagnosis to referral were obtained. The rate of return to full duty, the presence of formal duty or occupational limitations, and the rate of medical release from active duty were reviewed. CRPS treatment modalities were also recorded. Nonparametric and parametric statistical tests to include a Kruskal–Wallis rank sum test, ANOVA, student t-test, fisher exact test, and linear regression were performed using R statistical software version 3.6.0 (Free Software Foundation Inc. Boston, MA, USA). Linear modeling was performed for the VAS of patients with and without a medical board over time.

This project was reviewed by the Tripler Army Medical Center Institutional Review Board and approved as a Quality Improvement Project.

Patient consent was not required due to the restrospective nature and limited scope of the chart review.

The data presented in this study are available on request from the corresponding author. The data are not publicly available due to the study performed with military individual electronic medical records.

The authors declare no conflict of interest. The views expressed in this abstract/manuscript are those of the author(s) and do not reflect the official policy or position of the Uniformed Services University of the Health Sciences, Department of the Army, Department of Defense, or the US Government. 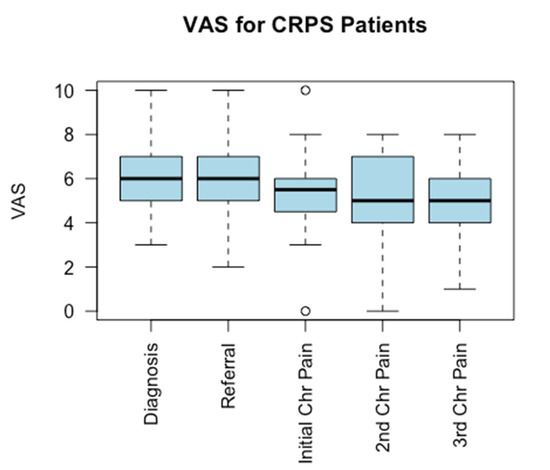 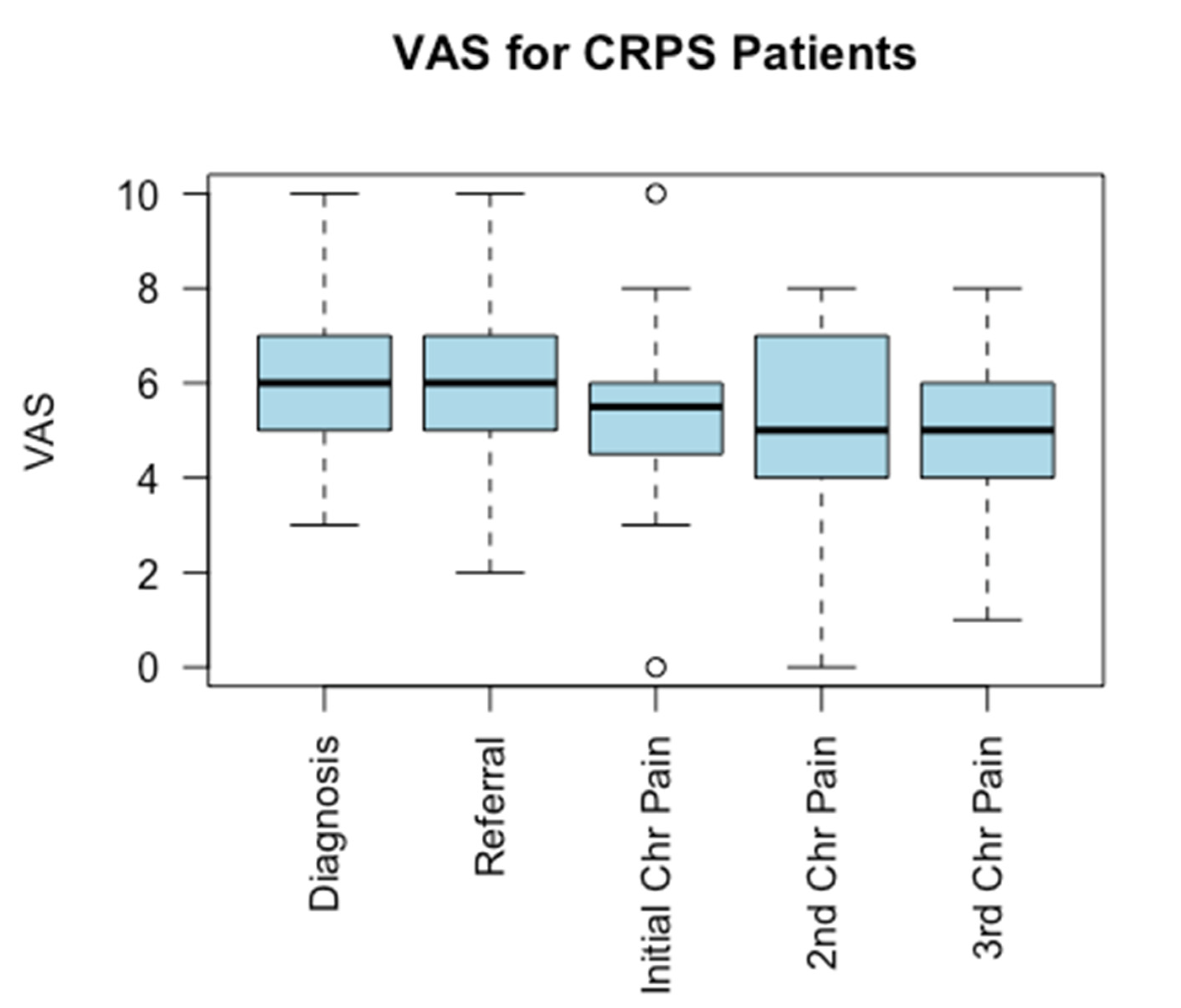 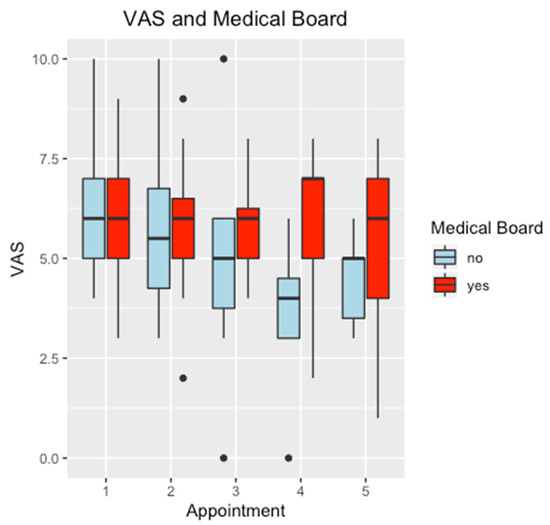 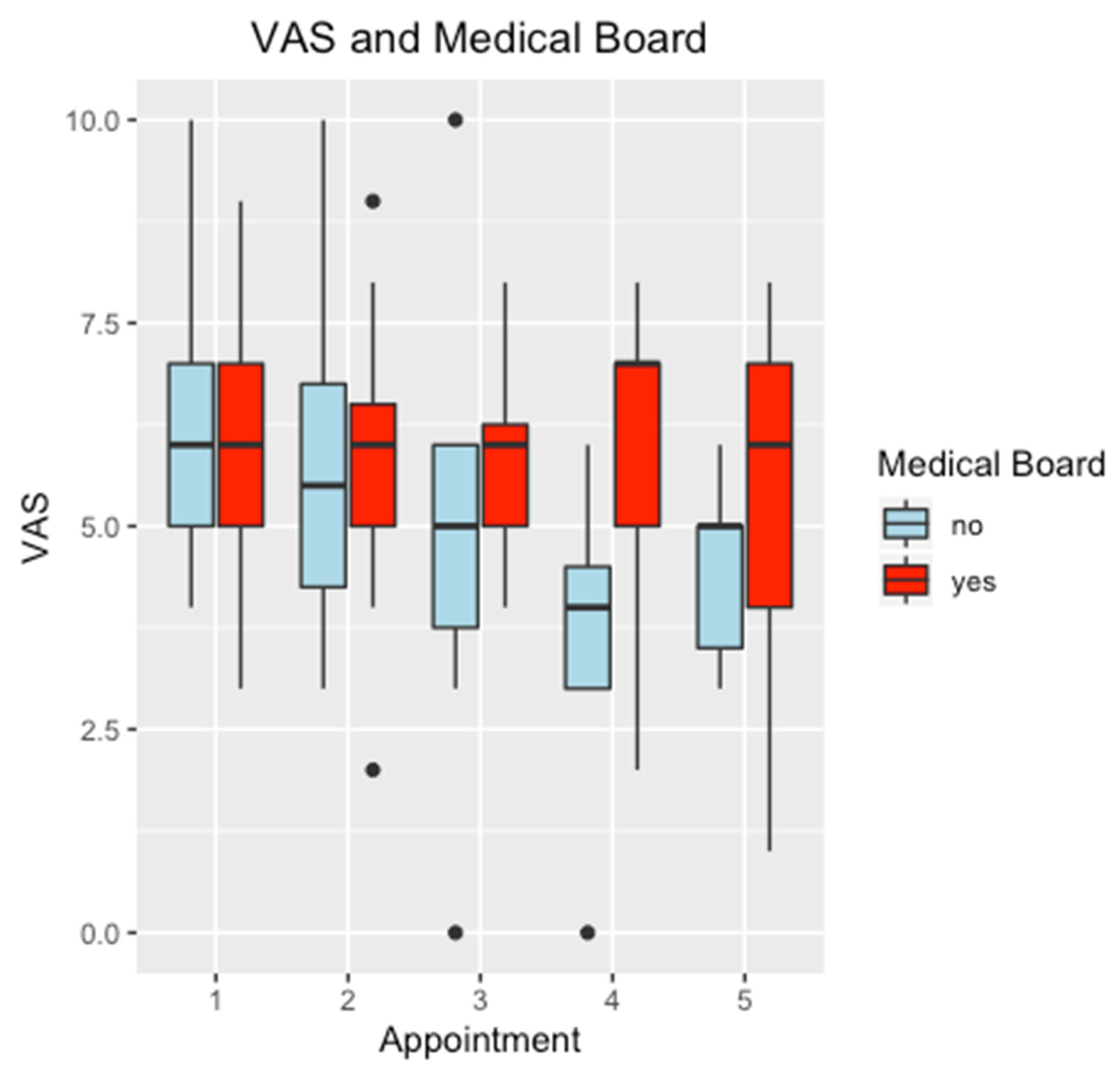