Sox3, which belongs to the SoxB1 subgroup, plays major roles in neural and gonadal development. In the present study, Japanese flounder Paralichthys olivaceus sox3 gene (Posox3) and its promoter sequence were isolated and characterized. The deduced PoSox3 protein contained 298 amino acids with a characteristic HMG-box domain. Alignment and phylogenetic analyses indicated that PoSox3 shares highly identical sequence with Sox3 homologues from different species. The promoter region of Posox3 has many potential transcription factor (TF) binding sites. The expression profiles of Posox3 in different developmental stages and diverse adult tissues were analyzed by quantitative real-time RT-PCR (qRT-PCR). Posox3 mRNA was maternally inherited, and maintained at a considerably high expression level between the blastula stage and the hatching stage during embryonic development. Posox3 was abundantly expressed in the adult brain and showed sexually dimorphic expression pattern. In situ hybridization (ISH) was carried out to investigate the cellular distribution of Posox3 in the ovary, and results showed the uniform distribution of Posox3 throughout the cytoplasm of oogonia and stage I–III oocytes. These results indicate that Posox3 has potentially vital roles in embryonic and neural development and may be involved in the oogenesis process. Our work provides a fundamental understanding of the structure and potential functions of Sox3 in Paralichthys olivaceus. View Full-Text
Keywords: Japanese flounder (Paralichthys olivaceus); sox3; promoter analysis; sexually dimorphic expression Japanese flounder (Paralichthys olivaceus); sox3; promoter analysis; sexually dimorphic expression
►▼ Show Figures 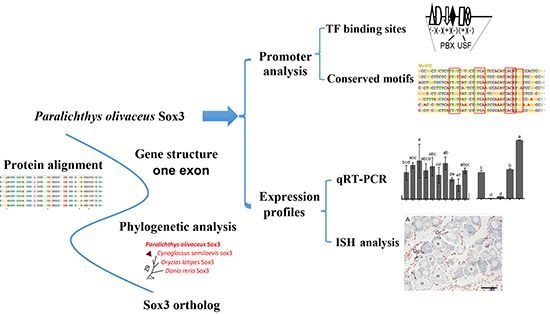