Beta-glucosidases (β-glucosidases) have attracted considerable attention in recent years for use in various biotechnological applications. They are also essential enzymes for lignocellulose degradation in biofuel production. However, cost-effective biomass conversion requires the use of highly efficient enzymes. Thus, the search for new enzymes as better alternatives of the currently available enzyme preparations is highly important. Thermophilic fungi are nowadays considered as a promising source of enzymes with improved stability. Here, the crystal structure of a family GH3 β-glucosidase from the thermophilic fungus Chaetomium thermophilum (CtBGL) was determined at a resolution of 2.99 Å. The structure showed the three-domain architecture found in other β-glucosidases with variations in loops and linker regions. The active site catalytic residues in CtBGL were identified as Asp287 (nucleophile) and Glu517 (acid/base). Structural comparison of CtBGL with Protein Data Bank (PDB)-deposited structures revealed variations among glycosylated Asn residues. The enzyme displayed moderate glycosylation compared to other GH3 family β-glucosidases with similar structure. A new glycosylation site at position Asn504 was identified in CtBGL. Moreover, comparison with respect to several thermostability parameters suggested that glycosylation and charged residues involved in electrostatic interactions may contribute to the stability of the enzyme at elevated temperatures. The reported CtBGL structure provides additional insights into the family GH3 enzymes and could offer new ideas for further improvements in β-glucosidases for more efficient use in biotechnological applications regarding cellulose degradation. View Full-Text
Keywords: glycoside hydrolase; cellulose degradation; thermophilic fungus; β-glucosidases; Chaetomium thermophilum; protein structure; fungal enzymes glycoside hydrolase; cellulose degradation; thermophilic fungus; β-glucosidases; Chaetomium thermophilum; protein structure; fungal enzymes
►▼ Show Figures 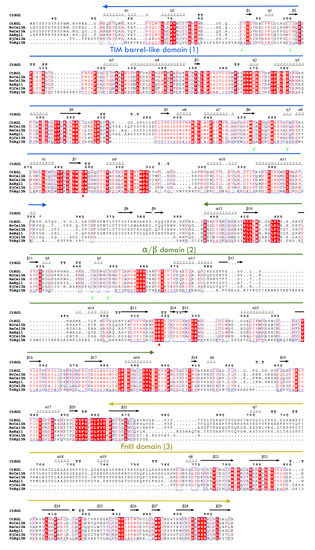