A Case Report of a Japanese Boy with Morquio A Syndrome: Effects of Enzyme Replacement Therapy Initiated at the Age of 24 Months

Genetic Base of Behavioral Disorders in Mucopolysaccharidoses: Transcriptomic Studies

Mucopolysaccharidoses (MPS) are a group of inherited metabolic diseases caused by mutations leading to defective degradation of glycosaminoglycans (GAGs) and their accumulation in cells. Among 11 known types and subtypes of MPS, neuronopathy occurs in seven (MPS I, II, IIIA, IIIB, IIIC, IIID, VII). Brain dysfunctions, occurring in these seven types/subtypes include various behavioral disorders. Intriguingly, behavioral symptoms are significantly different between patients suffering from various MPS types. Molecular base of such differences remains unknown. Here, we asked if expression of genes considered as connected to behavior (based on Gene Ontology, GO terms) is changed in MPS. Using cell lines of all MPS types, we have performed transcriptomic (RNA-seq) studies and assessed expression of genes involved in behavior. We found significant differences between MPS types in this regard, with the most severe changes in MPS IIIA (the type considered as the behaviorally most severely affected), while the lowest changes in MPS IVA and MPS VI (types in which little or no behavioral disorders are known). Intriguingly, relatively severe changes were found also in MPS IVB (in which, despite no behavioral disorder noted, the same gene is mutated as in GM1 gangliosidosis, a severe neurodegenerative disease) and MPS IX (in which only a few patients were described to date, thus, behavioral problems are not well recognized). More detailed analyses of expression of certain genes allowed us to propose an association of specific changes in the levels of transcripts in specific MPS types to certain behavioral disorders observed in patients. Therefore, this work provides a principle for further studies on the molecular mechanism of behavioral changes occurring in MPS patients. View Full-Text
Keywords: mucopolysaccharidosis; transcriptomics; behavioral disorders mucopolysaccharidosis; transcriptomics; behavioral disorders
►▼ Show Figures 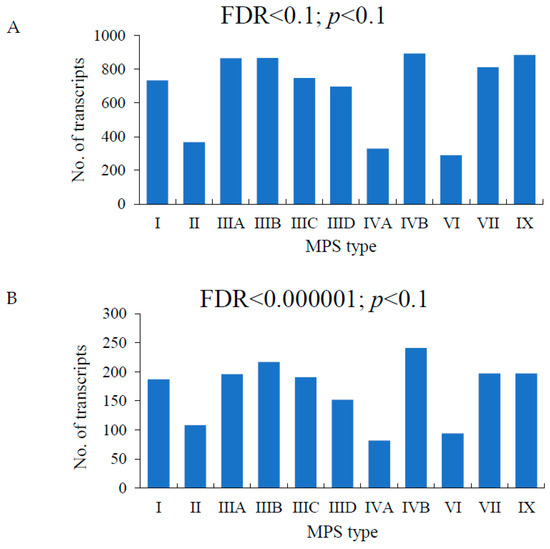