Enhanced Yield of Bioactivities from Onion (Allium cepa L.) Skin and Their Antioxidant and Anti-α-Amylase Activities

HIV-1 CRF07_BC is a recombinant virus with amino acid (a.a.) deletions in p6Gag, which are overlapped with the Alix-binding domain. Galectin-3 (Gal3), a β-galactose binding lectin, has been reported to interact with Alix and regulate HIV-1 subtype B budding. This study aims to evaluate the role of Gal3 in HIV-1 CRF07_BC infection and the potential effect of a.a. deletions on Gal3-mediated regulation. A total of 38 HIV-1+ injecting drug users (IDUs) were enrolled in the study. Viral characterization and correlation of Gal3 were validated. CRF07_BC containing 7 a.a. deletions and wild-type in the p6Gag (CRF07_BC-7d and -wt) were isolated and infectious clones were generated. Viral growth kinetic and budding assays using Jurkat-CCR5/Jurkat-CCR5-Gal3 cells infected with CRF07_BC were performed. Results indicate that 69.4% (25/38) of the recruited patients were identified as CRF07_BC, and CRF07_BC-7d was predominant. Slow disease progression and significantly higher plasma Gal3 were noted in CRF07_BC patients (p < 0.01). Results revealed that CRF07_BC infection resulted in Gal3 expression, which was induced by Tat. Growth dynamic and budding assays indicated that Gal3 expression in Jurkat-CCR5 cells significantly enhanced CRF07_BC-wt replication and budding (p < 0.05), while the promoting effect was ameliorated in CRF07_BC-7d. Co-immunoprecipitation found that deletions in the p6Gag reduced Gal-3-mediated enhancement of the Alix–Gag interaction. View Full-Text
Keywords: Galectin-3; HIV-1; CRF07_BC; p6Gag; Alix Galectin-3; HIV-1; CRF07_BC; p6Gag; Alix
►▼ Show Figures 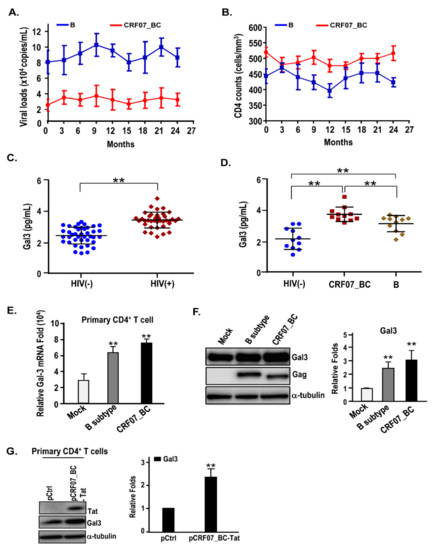