Engineering of Janus-Like Dendrimers with Peptides Derived from Glycoproteins of Herpes Simplex Virus Type 1: Toward a Versatile and Novel Antiviral Platform
Previous Article in Journal

The Role of Calcium in Wound Healing

Persistent infection with High Risk-Human Papilloma Viruses (HR-HPVs) is a primary cause of cervical cancer worldwide. Vaginal-dysbiosis-associated bacteria were correlated with the persistence of HR-HPVs infection and with increased cancer risk. We obtained strains of the most represented bacterial species in vaginal microbiota and evaluated their effects on the survival of cervical epithelial cells and immune homeostasis. The contribution of each species to supporting the antiviral response was also studied. Epithelial cell viability was affected by culture supernatants of most vaginal-dysbiosis bacteria, whereas Lactobacillus gasseri or Lactobacillus jensenii resulted in the best stimulus to induce interferon-γ (IFN-γ) production by human mononuclear cells from peripheral blood (PBMCs). Although vaginal-dysbiosis-associated bacteria induced the IFN-γ production, they were also optimal stimuli to interleukin-17 (IL-17) production. A positive correlation between IL-17 and IFN-γ secretion was observed in cultures of PBMCs with all vaginal-dysbiosis-associated bacteria suggesting that the adaptive immune response induced by these strains is not dominated by TH1 differentiation with reduced availability of IFN-γ, cytokine most effective in supporting virus clearance. Based on these results, we suggest that a vaginal microbiota dominated by lactobacilli, especially by L. gasseri or L. jensenii, may be able to assist immune cells with clearing HPV infection, bypasses the viral escape and restores immune homeostasis. View Full-Text
Keywords: vaginal microbiota; Lactobacillus; Gardnerella vaginalis; IFN-γ; IL-17 vaginal microbiota; Lactobacillus; Gardnerella vaginalis; IFN-γ; IL-17
►▼ Show Figures 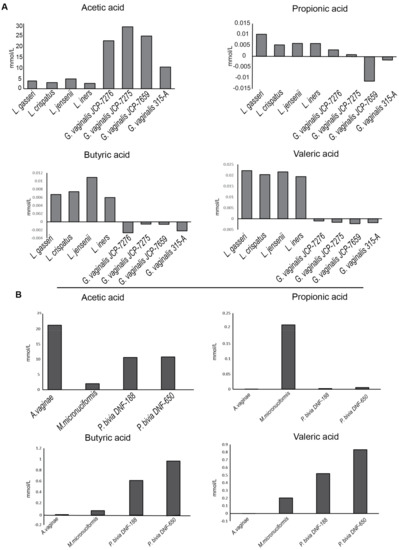