Role of Polyinosinic:Polycytidylic Acid-Induced Maternal Immune Activation and Subsequent Immune Challenge in the Behaviour and Microglial Cell Trajectory in Adult Offspring: A Study of the Neurodevelopmental Model of Schizophrenia

Multiple lines of evidence support the pathogenic role of maternal immune activation (MIA) in the occurrence of the schizophrenia-like disturbances in offspring. While in the brain the homeostatic role of neuron-microglia protein systems is well documented, the participation of the CX3CL1-CX3CR1 and CD200-CD200R dyads in the adverse impact of MIA often goes under-recognized. Therefore, in the present study, we examined the effect of MIA induced by polyinosinic:polycytidylic acid (Poly I:C) on the CX3CL1-CX3CR1 and CD200-CD200R axes, microglial trajectory (MhcII, Cd40, iNos, Il-1β, Tnf-α, Il-6, Arg1, Igf-1, Tgf-β and Il-4), and schizophrenia-like behaviour in adult male offspring of Sprague-Dawley rats. Additionally, according to the “two-hit” hypothesis of schizophrenia, we evaluated the influence of acute challenge with Poly I:C in adult prenatally MIA-exposed animals on the above parameters. In the present study, MIA evoked by Poly I:C injection in the late period of gestation led to the appearance of schizophrenia-like disturbances in adult offspring. Our results revealed the deficits manifested as a diminished number of aggressive interactions, presence of depressive-like episodes, and increase of exploratory activity, as well as a dichotomy in the sensorimotor gating in the prepulse inhibition (PPI) test expressed as two behavioural phenotypes (MIAPPI-low and MIAPPI-high). Furthermore, in the offspring rats subjected to a prenatal challenge (i.e., MIA) we noticed the lack of modulation of behavioural changes after the additional acute immune stimulus (Poly I:C) in adulthood. The important finding reported in this article is that MIA affects the expression and levels of the neuron-microglia proteins in the frontal cortex and hippocampus of adult offspring. We found that the changes in the CX3CL1-CX3CR1 axis could affect microglial trajectory, including decreased hippocampal mRNA level of MhcII and elevated cortical expression of Igf-1 in the MIAPPI-high animals and/or could cause the up-regulation of an inflammatory response (Il-6, Tnf-α, iNos) after the “second hit” in both examined brain regions and, at least in part, might differentiate behavioural disturbances in adult offspring. Consequently, the future effort to identify the biological background of these interactions in the Poly I:C-induced MIA model in Sprague-Dawley rats is desirable to unequivocally clarify this issue. View Full-Text
Keywords: maternal immune activation; polyinosinic:polycytidylic acid; CX3CL1-CX3CR1; CD200-CD200R; microglial reactivity; two-hit hypothesis of schizophrenia; behavioural disturbances maternal immune activation; polyinosinic:polycytidylic acid; CX3CL1-CX3CR1; CD200-CD200R; microglial reactivity; two-hit hypothesis of schizophrenia; behavioural disturbances
►▼ Show Figures 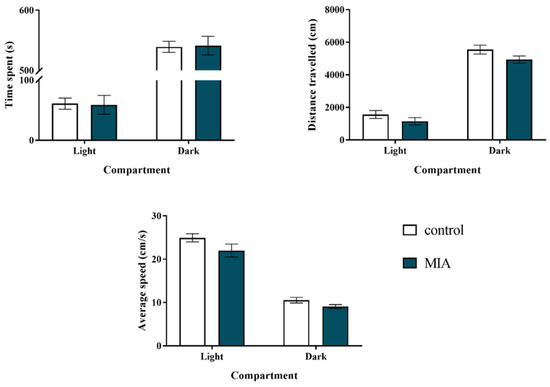