RNA interference is an evolutionary conserved mechanism by which organisms regulate the expression of genes in a sequence-specific manner to modulate defense responses against various abiotic or biotic stresses. Hops are grown for their use in brewing and, in recent years, for the pharmaceutical industry. Hop production is threatened by many phytopathogens, of which Verticillium, the causal agent of Verticillium wilt, is a major contributor to yield losses. In the present study, we performed identification, characterization, phylogenetic, and expression analyses of three Argonaute, two Dicer-like, and two RNA-dependent RNA polymerase genes in the susceptible hop cultivar Celeia and the resistant cultivar Wye Target after infection with Verticillium nonalfalfae. Phylogeny results showed clustering of hop RNAi proteins with their orthologues from the closely related species Cannabis sativa, Morus notabilis and Ziziphus jujuba which form a common cluster with species of the Rosaceae family. Expression analysis revealed downregulation of argonaute 2 in both cultivars on the third day post-inoculation, which may result in reduced AGO2-siRNA-mediated posttranscriptional gene silencing. Both cultivars may also repress ta-siRNA biogenesis at different dpi, as we observed downregulation of argonaute 7 in the susceptible cultivar on day 1 and downregulation of RDR6 in the resistant cultivar on day 3 after inoculation. View Full-Text
Keywords: Humulus lupulus; Verticillium nonalfalfae; fungal infection; RNA interference; plant–pathogen interactions; small RNA Humulus lupulus; Verticillium nonalfalfae; fungal infection; RNA interference; plant–pathogen interactions; small RNA
►▼ Show Figures 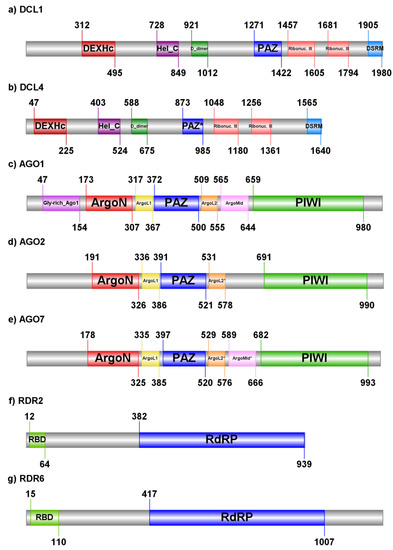