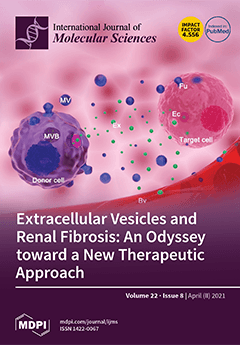 Cover Story (view full-size image): Renal fibrosis is the final manifestation of chronic kidney disease. Currently, there is no effective treatment for this deleterious condition. It has been demonstrated that extracellular vesicle (EV)-mediated crosstalk between various kidney cells has an essential role in the development of renal fibrosis. Importantly, EVs released from various mesenchymal stem cells (MSCs) and other cell sources have emerged as a powerful cell-free therapy in different models of renal fibrosis due to their antifibrotic characteristics and tissue regeneration capacity. On an odyssey toward a new therapeutic approach for the prevention/treatment of renal fibrosis based on the use of EVs as target and/or tools, a few potential strategies can be distinguished: interruption of EV-based communication, design of EV-based therapeutics, and design of EV-like vesicles. View this paper.
Previous Issue
Volume 22, April-1
Next Issue
Volume 22, May-1
We use cookies on our website to ensure you get the best experience. Read more about our cookies here.
Accept
We have just recently launched a new version of our website. Help us to further improve by taking part in this short 5 minute survey here. here.
Never show this again