Joint Risk of Rainfall and Storm Surges during Typhoons in a Coastal City of Haidian Island, China
Next Article in Special Issue

Who and Where: A Socio-Spatial Integrated Approach for Community-Based Health Research
Previous Article in Special Issue

The Social and Spatial Ecology of Dengue Presence and Burden during an Outbreak in Guayaquil, Ecuador, 2012

Spatio-Temporal Modeling of Zika and Dengue Infections within Colombia

The aim of this study is to estimate the parallel relative risk of Zika virus disease (ZVD) and dengue using spatio-temporal interaction effects models for one department and one city of Colombia during the 2015–2016 ZVD outbreak. We apply the integrated nested Laplace approximation (INLA) for parameter estimation, using the epidemiological week (EW) as a time measure. At the departmental level, the best model showed that the dengue or ZVD risk in one municipality was highly associated with risk in the same municipality during the preceding EWs, while at the city level, the final model selected established that the high risk of dengue or ZVD in one census sector was highly associated not only with its neighboring census sectors in the same EW, but also with its neighboring sectors in the preceding EW. The spatio-temporal models provided smoothed risk estimates, credible risk intervals, and estimation of the probability of high risk of dengue and ZVD by area and time period. We explore the intricacies of the modeling process and interpretation of the results, advocating for the use of spatio-temporal models of the relative risk of dengue and ZVD in order to generate highly valuable epidemiological information for public health decision making. View Full-Text
Keywords: disease mapping; Bayesian modeling; integrated nested Laplace approximation; relative risk disease mapping; Bayesian modeling; integrated nested Laplace approximation; relative risk
►▼ Show Figures 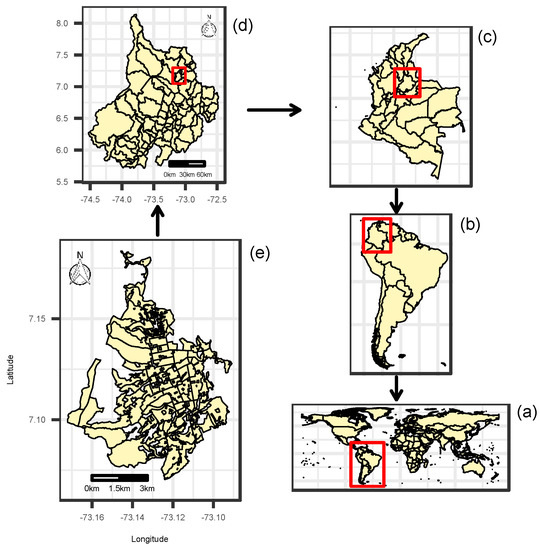