Data on the prevalence and causes of hearing loss is lacking from many low and middle-income countries, in part, because all-age population-based surveys of hearing loss can be expensive and time consuming. Restricting samples to older adults would reduce the sample size required, as hearing loss is more prevalent in this group. Population-based surveys of hearing loss require clinicians to be involved in the data collection team and reducing the duration of the survey may help to minimise the impact on service delivery. The objective of this paper was to identify the optimal age-group for conduct of population-based surveys of hearing loss, balancing sample size efficiencies, and expected response rates with ability to make inferences to the all-age population. Methods: Between 2013–2014, two all aged population-based surveys of hearing loss were conducted in one district each of India and Cameroon. Secondary data analysis was conducted to determine the proportion of hearing loss (moderate or greater) in people aged 30+, 40+ and 50+. Poisson regression models were developed to predict the expected prevalence of hearing loss in the whole population, based on the prevalence in people aged 30+, 40+, and 50+, which was compared to the observed prevalence. The distribution of causes in these age groups was also compared to the all-age population. Sample sizes and response rates were estimated to assess which age cut-off is most rapid. Results: Of 160 people in India and 131 in Cameroon with moderate or greater hearing loss, over 70% were older than 50 in both settings. For people aged 30+ (90.6% India; 76.3% Cameroon), 40+ (81% India; 75% Cameroon) and 50+ (73% India; 73% Cameroon) the proportions were higher. Prediction based on Poisson distributed observations the predicted prevalence based on those aged 30+, 40+, and 50+ fell within the confidence intervals of the observed prevalence. The distribution of probable causes of hearing loss in the older age groups was statistically similar to the total population. Sample size calculations and an analysis of response rates suggested that a focus on those aged 50+ would minimise costs the most by reducing the survey duration. Conclusion: Restricting the age group included in surveys of hearing loss, in particular to people aged 50+, would still allow inferences to be made to the total population, and would mean that the required sample size would be smaller, thus reducing the duration of the survey and costs. View Full-Text
Keywords: hearing loss; epidemiology; developing countries hearing loss; epidemiology; developing countries
►▼ Show Figures 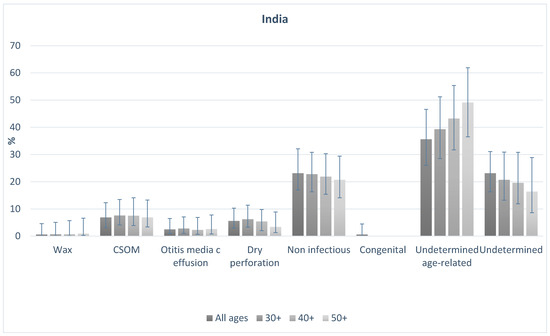