Global Lifetime and 12-Month Prevalence of Suicidal Behavior, Deliberate Self-Harm and Non-Suicidal Self-Injury in Children and Adolescents between 1989 and 2018: A Meta-Analysis
Previous Article in Journal

Metacognitive training (MCT) is a group intervention that addresses cognitive biases and distortions that could help maintain delusions and hallucinations in people with schizophrenia. This program has proven its effectiveness in reducing the symptoms, but its impact on cognitive insight has scarcely been investigated. Therefore, the aim of the study was to assess the program’s impact on cognitive insight in patients with long-term schizophrenia. A sample of 22 patients with schizophrenia was divided into two groups: one received 16 sessions of MCT (n = 11), while the other received the usual treatment (n = 11). They were assessed using the Beck Cognitive Insight Scale which measures two components, self-reflection and self-certainty, and the Positive and Negative Syndrome Scale (PANSS). The experimental group showed high levels of adherence, an increase in self-reflection, and a decrease in self-assurance levels as hypothesized. We found statistically significant differences between the control and experimental groups in excitation, hostility, positive symptomatology total score, hallucinatory behavior, and suspicion. In the usual treatment group, a non-significant decrease in positive symptoms was also observed. The findings showed that the implementation of the MCT program in real clinical settings can contribute to an improvement in the metacognitive ability and symptomatology of people with schizophrenia. View Full-Text
Keywords: metacognitive training; cognitive insight; positive symptoms; schizophrenia metacognitive training; cognitive insight; positive symptoms; schizophrenia
►▼ Show Figures 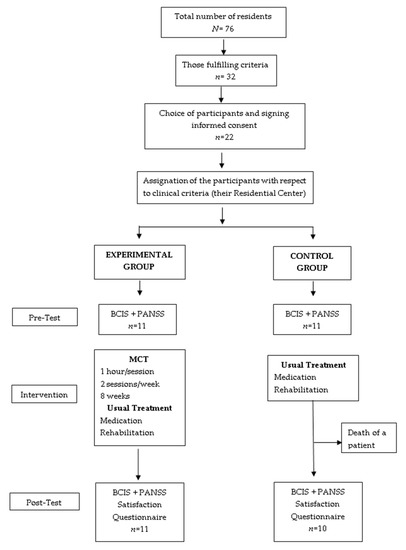 
Simón-Expósito, Miguel, and Elena Felipe-Castaño. 2019. "Effects of Metacognitive Training on Cognitive Insight in a Sample of Patients with Schizophrenia" International Journal of Environmental Research and Public Health 16, no. 22: 4541. https://0-doi-org.brum.beds.ac.uk/10.3390/ijerph16224541