Sex Differences in Frail Older Adults with Foot Pain in a Spanish Population: An Observational Study
Previous Article in Journal

A sample of Italian midwives willing to participate in the survey were invited through the most frequently used social media, i.e., Facebook and Instagram, to complete a questionnaire. We chose this extremely smart method in order to maximize the final sample size and the willingness to fill a self-administered web survey allowed us to obtain the informed consent to take part in the survey, Thus, participation was voluntary and confidential.
Midwifes were reached through social media, and those willing to fill the questionnaire were enrolled. In this case, they were told that their personal data would not have been recorded in any way; however, we asked them to declare their job activity, and we trusted health care professionals declaring to be midwifes at the time of starting the questionnaire. We could not analyse any other data nor the reason for refusing or agreeing to participate. All cases of incomplete questionnaire were excluded from the analysis.
The survey was built on Google Forms, and sent to Italian midwifes. Data was collected starting from 14 June 2019 to 31 August 2019. The statistical power of the sample to obtain statistically significant results was determined by a freely available on-line web platform. The authors considered the appropriate sample size for an adequate study power considering a confidence level of 99% and a confidence interval of 5% on a total of about 21,000 midwifes working in Italy. The analysis computed a representative sample size of 377 midwifes. The confidence interval also called margin of error is the plus-or-minus figure usually reported in opinion poll results, whilst the confidence level suggests the level of security in excluding wrong answers.

The questionnaire consisted of a cover page (describing the purpose of the study, as well the methods to ensure anonymity and voluntary participation), and three special sections, including several different items each. In particular, the special sections dealt with:

For statistical analysis, first a descriptive analysis was performed, including results derived from either MEQ calculated score and personal self-perceived chronotype. The sample was classified according to the self-perception of risk of medication errors, and subgroups by age, working schedule, years of working experience, and chronotype were then compared. Second, a logistic regression analysis was done, considering the self-perception of risk of medication errors as the dependent variable and all the other parameters as the independent ones. Third, a cluster analysis was performed, to determine the phenotype of health care professionals exposed to risk of medication errors based on demography, type of work, and chronotype. IBM Statistical Package for Social Science (SPSS 13.0 for Windows, SPSS Inc., Chicago, IL, USA) was utilized.

The final sample included 401 Italian midwives (98.8% women), and the main characteristics are summarized in Table 2.

3.3. Perception of Risk of Medication Errors

The results of this study, addressed to investigate the possible relationship between chronotype and risk of medication errors in midwives, showed that the risk of medication errors was associated with younger age, shift work, relatively low working experience, and being an Intermediate chronotype. This is the first report on the association of shift work and risk medical errors in midwives. A recent multicentre Chinese study showed that sleep quality, social support, job satisfaction, occupational injuries, adverse life events, frequency of irregular meals, and employment type were statistically significant factors influencing fatigue among midwives [35]. We found that younger persons, with reduced working experiences, were more likely to report an increased risk of error. It is possible that experience may help in attenuating the decrease in performance during night shift.
Errors. Medication error incidents are more likely to be reported in the morning shift [14,36], but it is common practice that morning therapy is prearranged by the night nursing crew at the end of their shift. Rhythm desynchronization exhibits also gender-specific differences [37], and studies on the circadian and sleep-wake-dependent regulation of cognition in a forced desynchronization protocol showed that accuracy exhibited the largest sex difference in circadian modulation, with the worse performance in women in the early morning hours (at around 6 a.m.) [38]. Even risk taking, a complex form of decision-making that involves calculated assessments of potential costs and rewards, may play a role in the determination of errors. Both gender-specific and chronotype differences exist, since males report higher propensity for risk-taking, in particular E-types. However, although there is no significant difference in risk propensity or risk-taking behaviour across chronotypes in males, E-type females significantly report and take more risk than other chronotypes [39].
Chronotype. Chronotype is also strongly implicated in performance tasks, also making reference to the so-called “synchrony effects”, i.e., superior performance at optimal and inferior performance at suboptimal times of day. A study aimed at evaluating the effect of individual differences in chronotype on performance task, evaluated a sample of M-type and E-type women during a driving session in morning (8 a.m.) and evening (8 p.m.). A vigilance decrement was found when E-type participants drove at their nonoptimal time of day (morning session). In contrast, driving performance in the M-type group remained stable over time on task and was not affected by time of day [40]. By contrast, studies on subjects tested for mean reaction times, error rates, and efficiency of three attentional networks (alerting, orienting, and executive control/conflict) at two time points (time 1 or baseline at 8 a.m.; time 2, after 18-h sustained wakefulness at 2 a.m.), showed that E-types participants outperformed M-types on incongruent time, i.e., deep night [21]. On one hand, negative effects of sleep impairments seem to be confirmed to affect more E-types than other chronotypes. An Australian online survey study conducted on paramedics (age 39 ± 12 years; 54% women; 85% rotating shift-workers; 57% I-types, 32% M-types, 11% E-types), showed significantly higher depression scores, anxiety, poorer sleep quality, and reduced general well-being in the E-types, compared with M-types [41]. Our study identifies Intermediate-type as the group at higher risk of error. On one hand, this result is contradictory with respect to the available literature. On the other, this result, if confirmed, is extremely interesting since Intermediate chronotype represents the most frequent circadian preference and not only in our sample. Thus, the finding that younger midwives, with relatively limited working experience, and even with chronotype extremes, are exposed to higher risk of error during their night shift, raises serious concern.
Limitations. We are aware of several limitations to this study: (a) cross-sectional design, based on data collected through a web survey, therefore the sample could be sized only by social media users only; (b) the MEQ score, even if used in the majority of studies for assessing morningness–eveningness preference, does not categorized for different ages [42]; (c) to evaluate the risk of medication error, we considered the general definition of near misses. Although it is largely the most frequent incident reported, we did not differentiate between near misses and no harm incidents [43]; (d) individual perception of the risk of medication errors is not a validated item yet; (e) logistic regression analysis did not identify independent factors; (f) we could not evaluate any gender effect, as most of the sample were women, as usually occurs for studies on nurses and midwives. However, there are also some positive aspects: (a) the web survey method warranted speed, and even in a short timeframe all different classes of age were represented; (b) we found that perception of chronotype was different from the effective profile identified by a well-validated score. This concept could help for future studies and also for practical applications since when workers (health care personnel in particular) ask for health measures, they very often make reference to personal perception.
Coping strategies. Midwifery and nursing are acknowledged as stressful occupations, and the negative impact of high stress levels often requires coping strategies. Of these, the eleven most used have been identified via interview material: drinking alcohol, smoking, using the staff social club, using social networking websites, exercising, family activities, home-based activities, outdoor activities, avoiding people, displacement, and sleep [44]. Unfortunately, it is evident that some of these coping strategies are unhealthy and extremely concerning. Moreover, due to the stress burden, absenteeism is becoming a significant global problem, and taking a “mental health day” as sickness absence is a common phenomenon, taken by more than one half of nurses and midwives, according to an online cross-sectional survey in Australia [45].

With this study, we found that younger midwives, with lower working experience, engaged in shift work and belonging to an Intermediate chronotype, seem to be at higher risk of potential medication error. At least to the best of our knowledge, this is the first web survey study addressed to the relationship between chronotype, shift work, and perceived risk of medication error in midwives. Since morning hours seem to represent highest risk frame for female healthcare workers and shift work is not always aligned with individual circadian preference, our preliminary reports could stimulate further specific research aimed to practical applications. For example, assessment of individual chronotype and sleep attitude in healthcare personnel, by means of validated questionnaires, just previously suggested in terms of prevention of metabolic diseases [46], could provide easy and inexpensive method to identify subjects at potential higher risk of circadian disruption. Again, possible countermeasures, such as time-scheduled naps during night-shifts, have been positively tested on female nurses, who showed significantly greater increments in performance between 3:00 and 7:00 a.m. on nap versus no-nap nights [47]. Last but not least, attention to shift work consequences, together with specific training programs, could help to reduce medication errors and improve patients’ safety [48].

This study is supported by a scientific grant by the University of Ferrara (Fondo Incentivazione Ricerca -FIR- 2020, Roberto Manfredini). 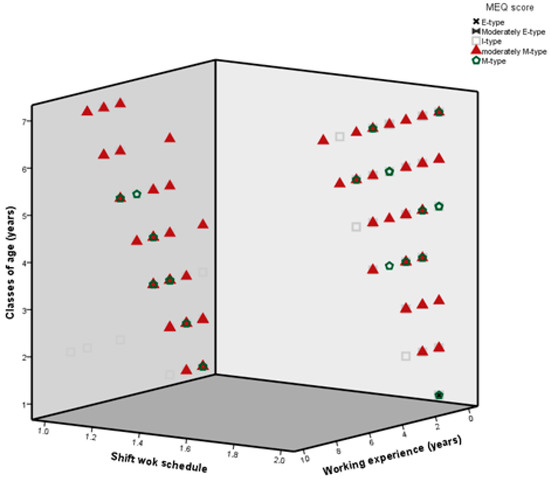 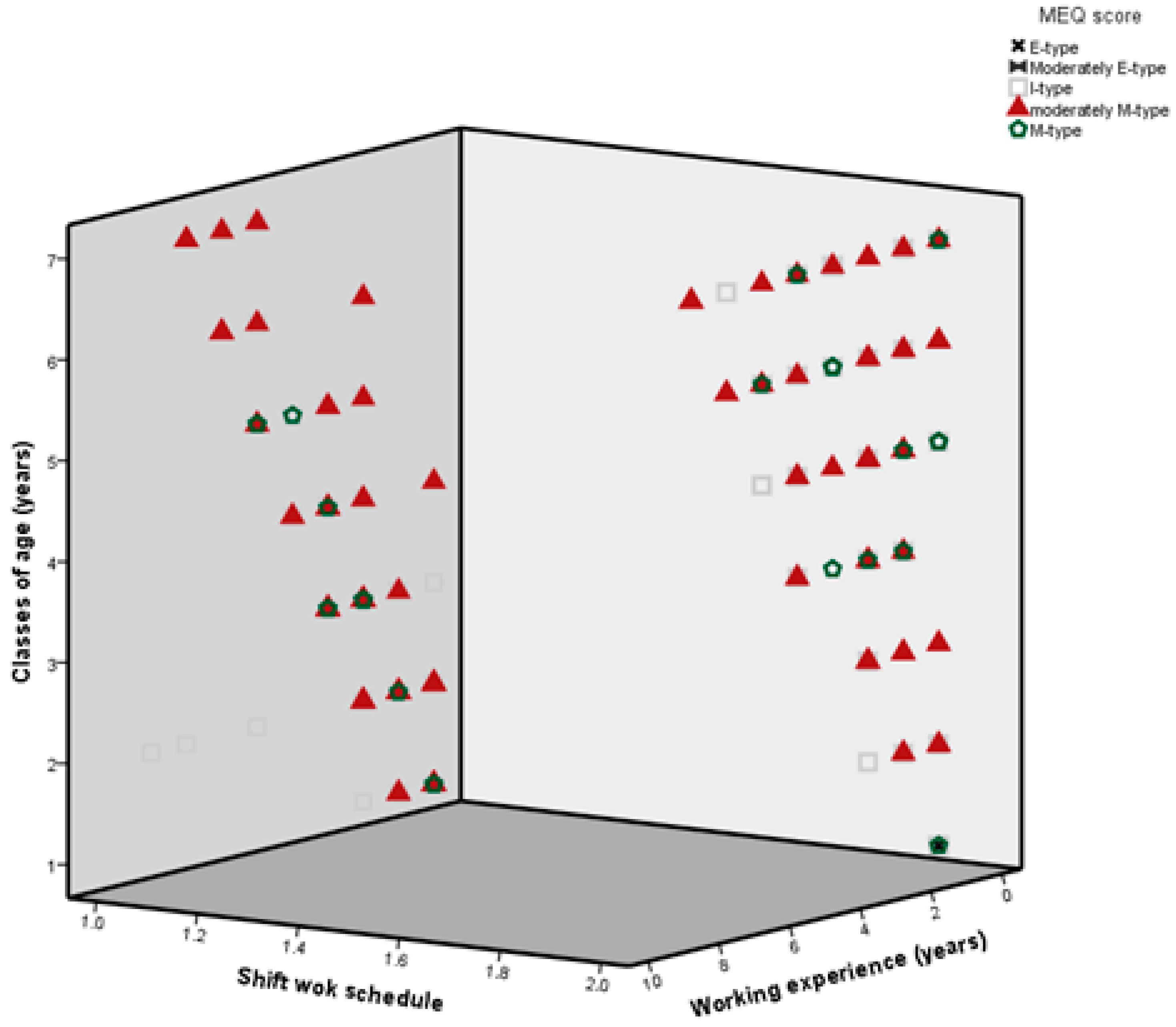 Table 2. Characteristics of the whole population of midwifes.
Table 2. Characteristics of the whole population of midwifes.
© 2020 by the authors. Licensee MDPI, Basel, Switzerland. This article is an open access article distributed under the terms and conditions of the Creative Commons Attribution (CC BY) license (http://creativecommons.org/licenses/by/4.0/).
We use cookies on our website to ensure you get the best experience. Read more about our cookies here.
Accept
We have just recently launched a new version of our website. Help us to further improve by taking part in this short 5 minute survey here. here.
Never show this again