The aim of this study was to evaluate the degree of conversion (DC), flexural strength (FS), and shear bond strength (SBS) of ceramic brackets bonded to enamel with experimental self-adhesive orthodontic composites. Functional monomers 10-methacryloyloxy-decyl-dihydrogen-phosphate (MDP) and glycerol-dimethacrylate-phosphate (GDMA-P) were used in experimental composites. They were compared to the same composite without an acidic monomer (negative control) and with enamel acid-etching prior to adhesive application (positive control). DC was evaluated by Raman micro-spectroscopy. Flexural three-point bending testing was performed in a universal testing machine. Ceramic brackets were bonded to bovine enamel and SBS was evaluated before and after 2000 thermal-cycles. Fracture patterns were surveyed with manual removal with specific pliers and analyzed by SEM. Statistics was performed using ANOVA and Tukey’s test (p < 0.05). DC of the control composite was significantly higher (p < 0.001) than that of GDMA-P and MDP. FS showed no significant difference between composites (p = 0.451). Regarding adhesion, the positive control (8.47 ± 0.88 MPa) and MDP (7.07 ± 2.69 MPa) obtained higher overall results. The predominant fracture pattern of the positive control and MDP was mixed while it was adhesive for further groups. The MDP-containing orthodontic composite attained similar adhesion to a conventional three-step orthodontic bonding system, with a similar fracture pattern and mechanical properties. Nevertheless, the presence of acidic functional monomers reduced the DC. View Full-Text
Keywords: orthodontic brackets; composite resins; dental materials orthodontic brackets; composite resins; dental materials
►▼ Show Figures 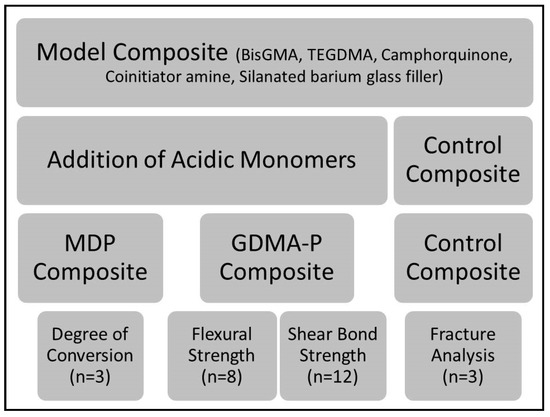