The reserve capacity coefficient actually reflects the expansion multiple of the basic OD matrix. In the original model (Equation (4)), the constraint condition is that the link flows which have been expanded should be under capacity limits. Considering that when the road service level is lower than a certain value, travelers cannot arrive at the destination in the given time, which is “unreliable”. On the basis of capacity limitation, this article improves the model by adding service level coefficient , and the value can be between 0.8–1.0 [24], as shown in Equation (5):
At the same time, with the increase of traffic flow, the road impedance increases and the travel time of users increases. After the increase to a certain extent (relative to the original travel time), the road network is actually “unreliable” for users. represents the user’s travel time, is defined as the travel time reliability threshold, if possible, it can be comprehensively selected according to the field survey questionnaire. The meaning of other variables and parameters is the same as above, and the model is improved to Equation (6).
It can be found that the improvement of the upper-level model is essentially a restriction on the traffic assignment flow. To a certain extent, the reliability analysis of the traffic capacity and travel time can be unified.

The lower-level model is the traffic assignment model. In this article, the SUE model based on origin (see model 7) is selected. Compared to the Fisk model [25], the output of this model is the traffic flow from different origins, which can more intuitively reflect the OD connection demand [7], at the same time, this model can optimize the algorithm design and improve the efficiency [26]: where represents the origin of the network, represents the destination of the network, , , and represents node of road network, the represents the flow of the road section from the origin , and are switch functions, when ,, else . The meaning of other functions is the same as above paper. The definition of and are as follows:
Considering that in the real world, the actual road section flow will not exceed the road capacity, and the saturation is “1” under the most congested state. When the congestion reaches a certain degree, users will choose other routes. The model 7 is optimized as follows, and the capacity constraint is added to the constraint conditions:

According to the previous reliability analysis process, it can be found that the algorithms involved the SUE problem with constraints and sensitivity analysis problem. To solve the SUE problem with constraints, the penalty algorithm such as the Lagrange multiplier method can be used, and the optimal solutions can be obtained by continuous iteration [27]. Its essence is the design of the traffic assignment algorithm. The sensitivity analysis problem can use the method of mathematical programming, which is relatively simple to get the results.

MSA is a traditional algorithm to solve the SUE problem. The general process is as follows:
Step 1: Initialization. The free travel time is taken as the travel impedance to load the traffic, and the initial value is obtained , the iteration count is defined as .
Step 2: The impedance is updated from the previous section flow as , and then the auxiliary flow can be obtained by distributing the flow on the basis of the new impedance.
Step 3: Calculating the search direction , and the “successive average” movement is carried out as follows:
Step 4: Convergence check. If satisfied, stop, otherwise continue with step 2.
For traffic loading, dial algorithm can be used, which will not be discussed here.
In terms of convergence conditions, in practical application, the number of times can be selected to judge regardless of the convergence situation; the following formula can also be used: where can take a minimum constant. and can be taken as .
It can be found that the original MSA algorithm does not involve the evaluation of the SUE model, and the step size is “successive average sequence” defined by itself. In self convergence, the speed is very slow, and the accuracy is difficult to guarantee by defining the convergence times. In terms of evaluation function, the SUE model based on origin avoids path enumeration, and can improve the convergence efficiency of MSA. Lee has verified that the efficiency of the improved MSA is higher than the original by the Sioux Fall network and the Barcelona network [28].
Step 1: Initialization. Get the initial solutions , let the count function .
Step 2: Look for search directions. The auxiliary solution is found to satisfy the sub problem, which is: where represents the flow of the road section from the origin , and the descent direction can be similar to the original MSA.
Step 3: Convergence check. If the convergence condition is reached, stop. Otherwise, proceed to step 4.
Step 4: Update step size. The solution is nonnegative number and satisfies the following conditions:
Step 5: Move. Get new traffic flow :
Let , and go back to step 2.
It can be found that the key of the new optimization algorithm is to solve the sub problem of step 2, where the dial or bell algorithm is used to load. Step 1 can also use travel time of zero flow to load bell second algorithm.
The convergence criterion can be set to the following Equation (9). Compared with the step size of the original MSA, the convergence will be faster: where can take a small real number.

The Lagrange multipliers of constraint conditions of model 8 are defined as and , and the original model can be transformed into model 10 [29]:
According to the Kuhn–Tucker condition, the equations are obtained:
In the optimal solution, the derivation of the above equations can be obtained as follows: where “” represents a diagonal matrix with diagonal vectors. In order to simplify the model form, vector matrices and are defined:
Then, we can get: .
From the above formula, combined with Taylor expansion, Equation (11) can be obtained: where represents the disturbance of the input variable, is a real parameter, when , . After getting a set of initial solutions, a new solution with the change of free flow time or OD demand can be obtained according to Equation (12).
According to Equation (11), the Hessian matrix is obtained:
When the section equal to the section , , otherwise it is zero. At the same time, according to the Kuhn–Tucker condition, when , ; when , a penalty algorithm is needed to make the solution approximate the real value, so .
According to the above analysis, the vector matrix and can be transformed into:
So, we can get:
The algorithm of sensitivity analysis is essentially a sensitivity matrix calculation problem. The construction process of the algorithm is as follows:
Step 1: Get the optimal solution under capacity limitation by Lagrange algorithm.
Step 2: Calculate vector matrix and .
Step 3: According to Equation (12), the sensitivity matrix of network flow can be obtained.
It is worth noting that the inverse calculation of vector matrix is needed in the calculation, and there will be rank deficiency in actual calculation, so the matrix needs to be processed according to the actual situation, so as to be able to further calculate [30].

The road network consists of 5 nodes and 7 road sections, node 1 is the origin of the road network, and the destinations are node 4 and node 5. , . The topology of the road network is shown in Figure 2. The road network attributes are shown in Table 1.
The capacity of road fluctuates with probability. There are 16 road network states in total, which are arranged from large to small according to different state probabilities, as shown in Table 2. The BPR (Bureau of Public Road) function is selected as the link impedance function, where let and . In order to simplify the analysis, the threshold value of travel time and travel demand is selected as the same value: , , and the service level correction coefficient is taken as 1. The parameters which denote traveler’s proficiency in route selection in the SUE model.

Equation (4) is the traditional model to obtain the reserve capacity, its lower-level model has no capacity constraints, so at the state of low road capacity, the distribution flow may exceed the capacity of the road section, the reserve capacity is 1.
Taking state of 7 as an example, in the case of no capacity constraint, if the results are not optimized by the Lagrange multiplier method, the results are shown in Table 8. At this time, the flow of the road Section 3 is greater than the capacity: , so we get the by upper-level model, so the reserve capacity is . But in the actual situation, the distribution flow will not be higher than the link capacity, so this analysis result has some problems.
The traditional upper-level model is simple, there is no limit to the acceptability of the link formation time, so the result will be different from that of the improved model, such as the state of 2, it is shown in Table 9. Then, through the approximation form of upper bound and lower bound function, the reliability of the example road network is 0.54, as shown in Table 10 and Figure 4. The reliability of the road network is far lower than that result of the improved model.
Because the results of traffic flow assignment of traditional model do not conform to the law of reality, and the travel time acceptability is not considered, so the improved model allocation results are more reliable.

According to the results of the previous analysis, improving the reliability of the road network can start from two aspects: traffic demand control and road section improvement. Under the condition that traffic demand does not increase or the growth is very small (less than the reserve capacity), if the current traffic operation is relatively good, the overall reliability of the road network is “1”. The common traffic demand management means including traffic restriction in peak hours, rush hour commuting, etc. In the aspect of road section improvement, more attention should be paid to the key sections. Based on the contribution of road sections to reliability, the article identifies key sections, and the improvement methods include road widening, section reconstruction, etc. However, in the face of the large-scale road network, it is difficult to identify the key road sections by contribution degree, so the comprehensive judgment method can be adopted: take the intersection of the congested section and sensitive section [31].
This article improves the reliability analysis model and algorithm, and applies it to a small example, and puts forward the direction of improving the reliability of the road network. In the future, it can be applied to the actual large-scale road network, which can reflect the improvement efficiency of the algorithm. At the same time, the analysis results can provide certain reference for urban management. 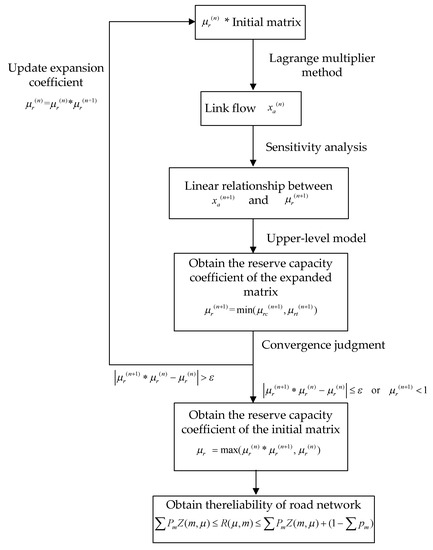 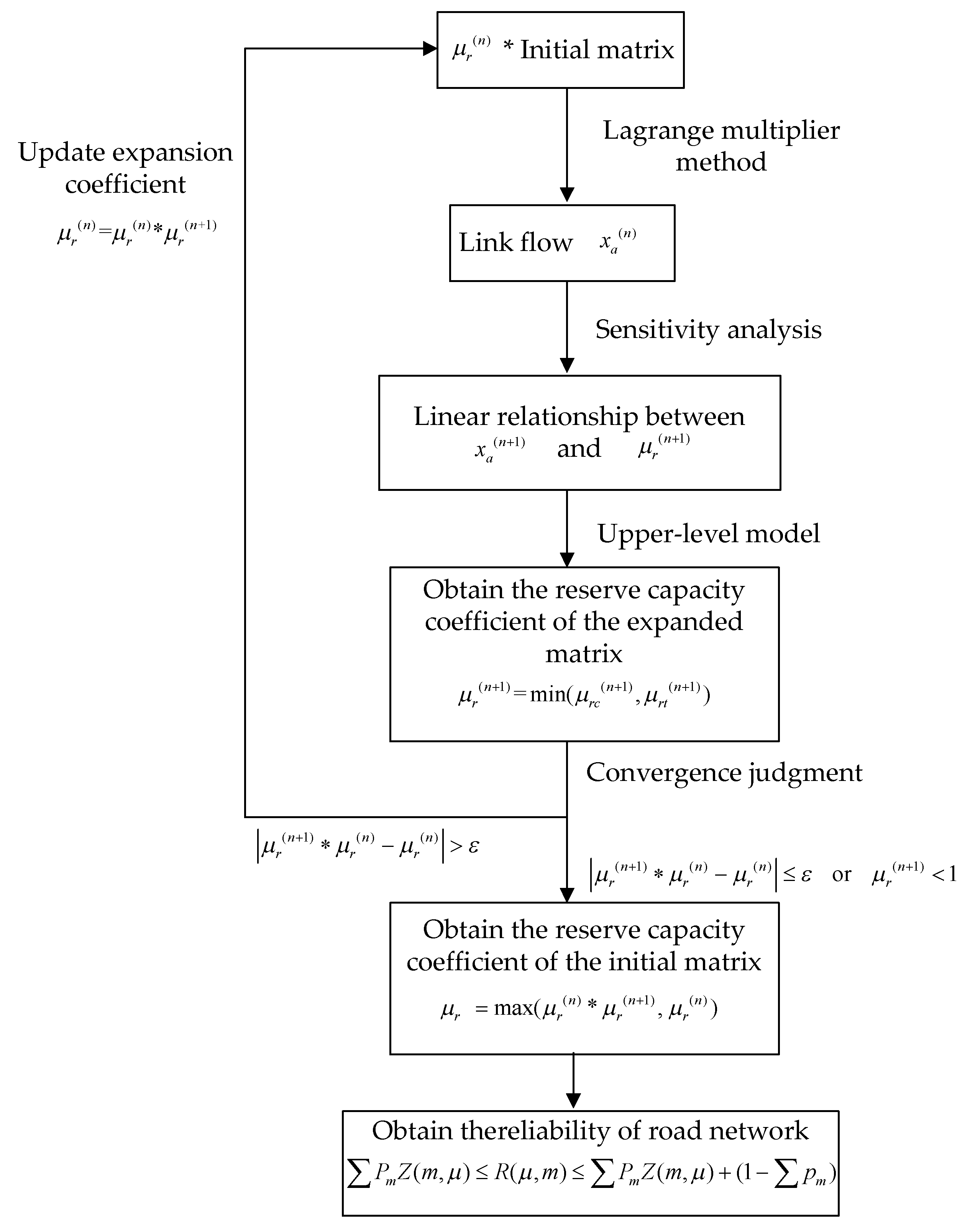 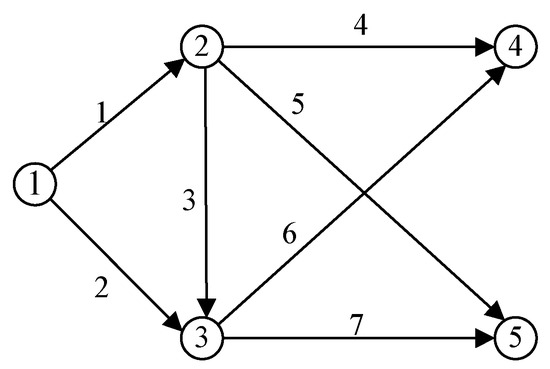 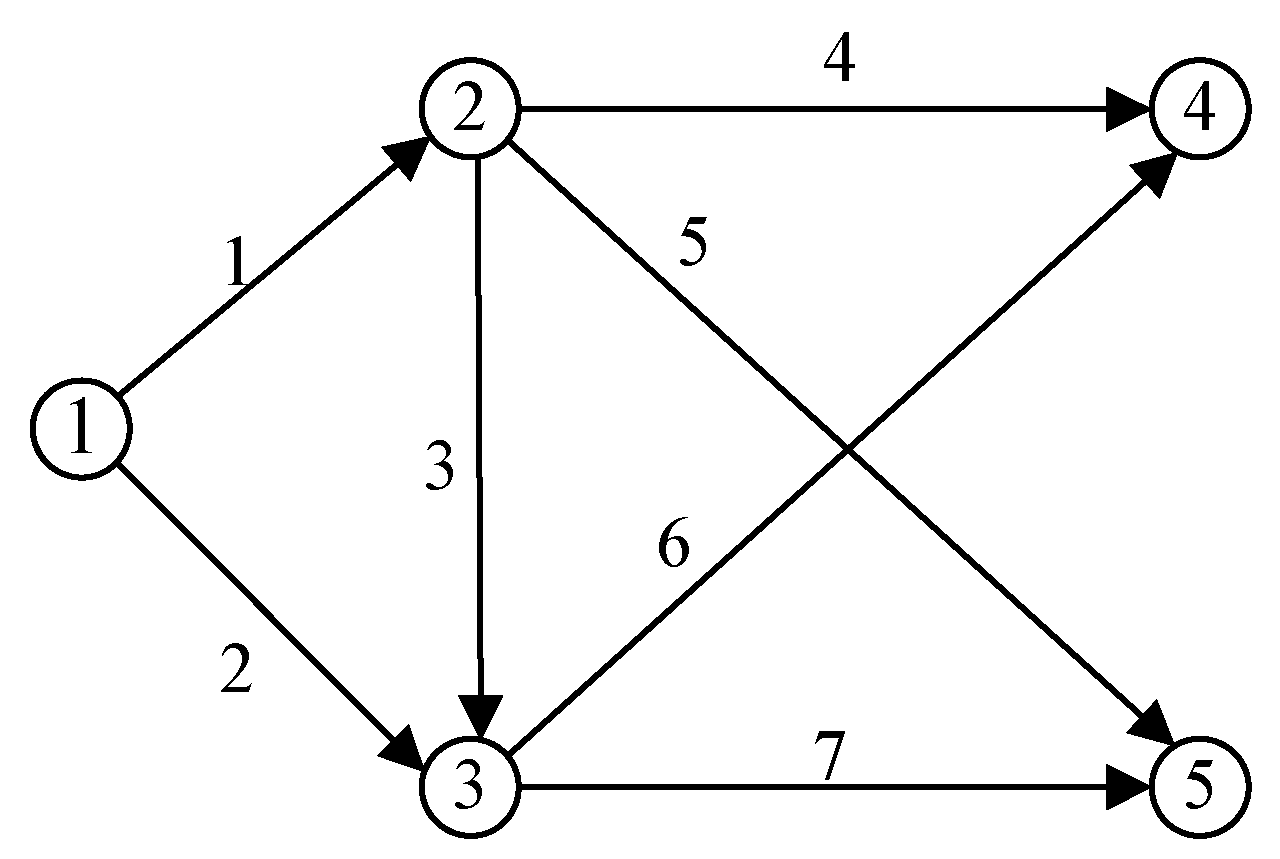 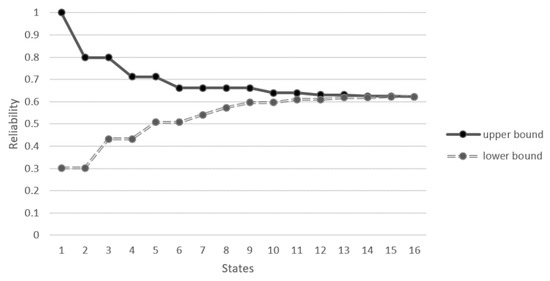 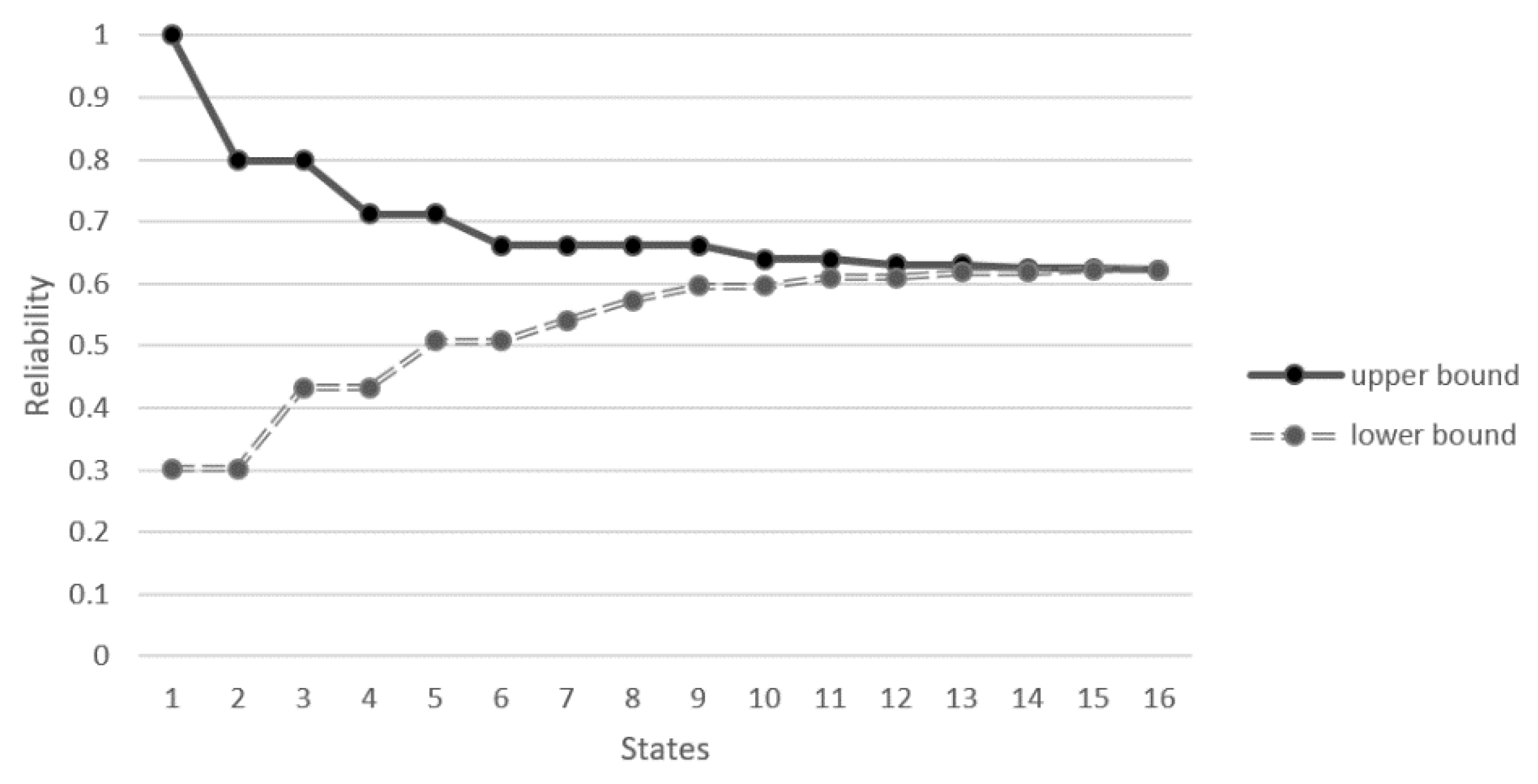 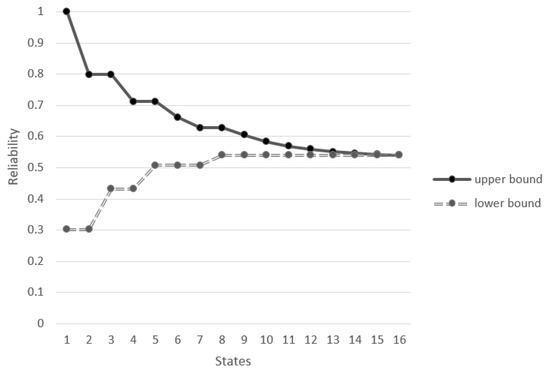 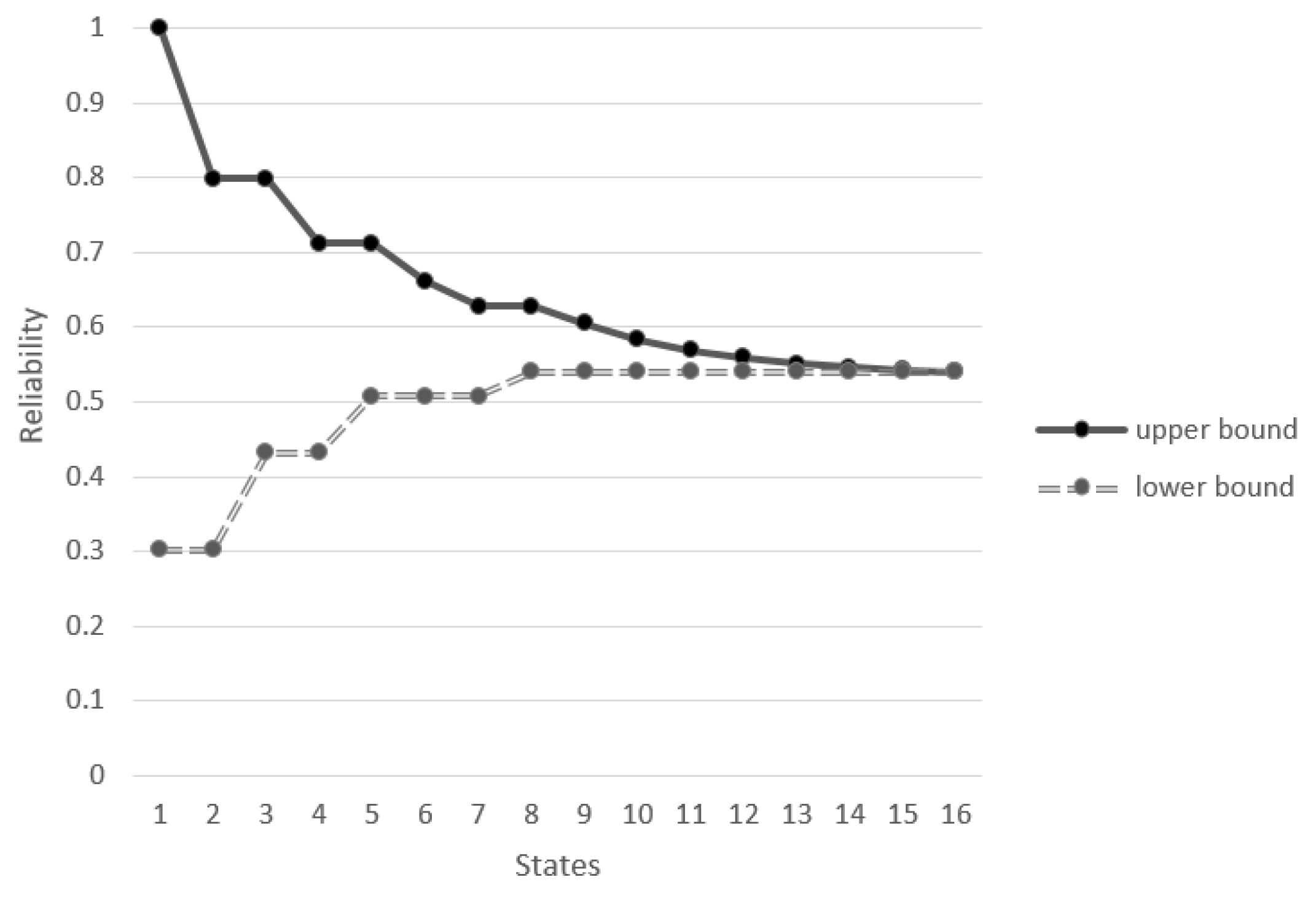