Papillomaviruses (PV) are a widely prevalent, heterogeneous group of host restricted and epitheliotropic viruses within the Papillomaviridae family [1,2]. They are circular, double stranded, DNA viruses, with a viral genome approximately 8 kb in length [1,2]. Over 300 types have been identified within mammals and bird species, with the majority being human isolates [1,2,3]. Human papillomaviruses (HPV) are classified into five genera, Alpha, Beta, Gamma, Mu, and Nu [1,2,3]. The alpha genus comprises those HPV types that infect the mucosal epithelium, and are divided into low-risk types, which cause benign genital warts, and high-risk types, which are associated with the development of cervical cancer as well as other anogenital and oropharyngeal cancers [1,2,3]. The Beta genus PVs are those that preferentially infect cutaneous sites causing benign papillomas or plaques [4,5,6]. However, cutaneous beta-PVs have been co-associated with ultraviolet (UV) radiation in the development of a subset of non-melanoma skin cancers (NMSC) [4,5,6]. A similar co-association between a feline cutaneous papillomavirus and UV exposure has been proposed for the development of cutaneous squamous cell carcinoma in cats [7]. The immune system is critical in controlling PV infections; thus, individuals with immunodeficiencies, such as those on immunosuppressive therapies due to organ transplantation, those infected with human immunodeficiency virus, or those with genetic immunodeficiencies, such as epidermodysplasia verruciformis (EV) or X-linked severe combined immunodeficiency (XSCID), are at a remarkably increased risk of developing persistent and severe cutaneous PV infections that commonly progress into NMSCs [4,5,6].
A similar increased risk of severe cutaneous PV infections has been observed in a research colony of dogs with XSCID [8]. These dogs are used as an animal model for human XSCID and exhibit a similar clinical and immunological phenotype as their human XSCID counterparts [9,10]. As with humans, these dogs require bone marrow transplants (BMT) within the first few weeks of life to survive. By 8 to 15 months post-BMT, ~70% of the dogs developed severe spontaneous cutaneous PV infections, and of those affected dogs, ~70% progressed to metastatic squamous cell carcinoma (SCC) [8]. Immunocompetent dogs in the same colony do not acquire these infections, suggesting that there is a remaining immune deficit in these dogs, which likely reflects what is happening with human XSCID patients [8]. Canine papillomavirus 2 (CPV2) is the virus associated with these cutaneous infections in XSCID dogs [11]. Because canine and human PVs share key biological characteristics and mechanisms of action, they are an ideal, natural model to study viral–host interactions of a cutaneous PV. In addition, the dog is a unique large animal model that can serve as a bridge for the translation of novel PV therapeutics into human testing.
Papillomaviruses mostly infect keratinocytes, key barrier skin cells that are capable of mounting an immune response by initiating expression of antiviral cytokines, such as type I and III interferons (IFNs) and IFN-stimulated genes, which act to eliminate the virus [12,13]. Keratinocytes recognize viral pathogens through expression of the pattern recognition receptors, such as the cytosolic nucleic acid sensors [14]. The cytosolic RNA receptors include melanoma differentiation associated gene 5 (MDA5) and retinoic acid-inducible gene I (RIGI) [15]. They can recognize double-stranded RNA (dsRNA) from RNA viruses, as well as dsRNA formed as an intermediate product of viral DNA replication [15]. Cytosolic DNA sensors include DNA-dependent activation of interferon regulatory factors (DAI) and interferon inducible gene 16 (IFI16) [16]. Upon recognition, these cytosolic nucleic acid sensors initiate signaling cascades leading to upregulation of type I and III IFNs [14]. In keratinocytes, this includes IFN-κ, IFN-β, IFN-λ1, and IFN-λ2/3 [17,18,19]. These IFNs are then released from the cell and bind to IFN receptors on the same or adjacent cells [14]. Binding to these IFN receptors initiates a second signaling cascade that culminates in the upregulation of hundreds of IFN-stimulated genes, which act to suppress and control infection [14], including IFN-Inducted Protein With Tetratricopeptide Repeats 1 (IFIT1), IFN regulatory factor 7 (IRF7), and DAI.
The mechanisms by which high-risk mucosal PVs abrogate the immune system are well studied. These high-risk mucosal PVs express oncogenes E6 and E7, which inhibit antiviral IFN and IFN-stimulated gene production through various mechanisms [20,21,22,23]. However, despite cutaneous PV’s significant effect on immunodeficient patients, little is known about their immune evasion strategies, but limited evidence suggests that cutaneous PV E6 and E7 may repress the antiviral response differently than mucosal PVs [24]. Using the canine cutaneous CPV2 model, we aimed to investigate the effect of cutaneous PV E6 and E7 on constitutive and induced mRNA expression of antiviral IFN and IFN-stimulated genes.

CPEKs were maintained in canine keratinocyte media CNT-09 (ZenBio) with the addition of penicillin–streptomycin antibiotics (Sigma-Aldrich, St. Louis, MO, USA). The pattern recognition receptor ligands used included Poly(I:C) high molecular weight complexed to Lyovec (InvivoGen, San Diego, CA, USA) and Poly(dA:dT) complexed to Lyovec (InvivoGen). Poly(I:C), when complexed to Lyovec, preferentially activates the cytosolic RNA sensors and not RNA sensors that reside within the endosomal compartment. Ligands were reconstituted with endotoxin free water as directed by the manufacturer. Recombinant IFN-β (PeproTech, Rocky Hill, NJ, USA) was reconstituted as recommended by the manufacturer. For stimulation experiments, CPEKs were routinely passaged and seeded into 6-well tissue culture plates at 3 × 105 cells/mL in 2 mL complete media. The cells were incubated at 37 °C and 5% CO2 overnight. The media was then removed and replaced with 2 mL CNT-09 without antibiotics before stimulation with 250 ng/mL Poly(I:C), 750 ng/mL Poly(dA:dT), 5000 Units/mL IFN-β, or mock-stimulated with endotoxin free water that was used for reconstitution of the ligands. The cells were then incubated for an additional 24 h at 37 °C before the cells were lysed for RNA extraction.

3.1. Constitutive mRNA Expression of a Subset of IFN and IFN-Stimulated Genes Is Reduced by CPV2 E6 in Canine Keratinocytes

Certain high-risk mucosal human papillomaviruses are able to evade immune detection by interfering with constitutive expression of antiviral cytokines [22,31]. To investigate if a similar effect is seen for CPV2, canine keratinocytes expressing E6 or E7 genes were generated using retrovirus transduction. CPV2 E6 and E7 expression was confirmed using real time reverse transcriptase PCR (RT-qPCR) and conventional RT-PCR, as antibodies to detect these proteins are not available. RT-qPCR results of E6 and E7 expression are presented in Figure 1A. Cq values averaged 16.6 for CPV2 E6 (reference gene Cq values averaging 14.7) in CPV2 E6-expressing keratinocytes, and Cq values averaged 14.9 for CPV2 E7 (reference gene Cq values averaging 14.6) in CPV2 E7-expressing keratinocytes. Given the similar primer efficiencies for E6 and E7 (Table 1), this demonstrates an ~3-fold difference between expression of E6 versus E7. While both genes are adequately expressed, with Cq values close to the level of the reference gene, it precludes direct comparison of results between E6 and E7. Conventional RT-PCR results are provided as a supplemental figure (Supplemental Figure S1). These keratinocytes were then cultured and expression levels of several antiviral cytokines were evaluated, including the type I IFNs (IFN-β and IFN-κ), type III IFNs (IFN-λ1 and IFN-λ2L), IFN-stimulated genes (IFIT1 and IRF7), and the pattern recognition receptors (IFI16, MDA5, and RIGI). IFN-α and the IFN-stimulated gene DAI were not examined, as expression levels were too low to accurately assess. Normal canine keratinocytes expressing vector only, CPV2 E6, or CPV2 E7 were cultured for 48 h before evaluation of mRNA expression levels. To compare the expression levels of the different IFNs and IFN-stimulated genes, we graphed the Delta Cq of each gene in vector only cells (Figure 1B,C). IFN-λ1 expression was highest, followed by IFN-λ2L, and then IFN-β and IFN-κ (Figure 1B). For the IFN-stimulated genes and pattern recognition receptors, expression of MDA5 was highest, followed by IFIT1, IFI16, IRF7, and RIGI (Figure 1C). In the canine keratinocytes that expressed CPV2 E6 or E7, we found that CPV2 E6, but not E7, reduced mRNA expression of IFN-β, IFN-λ1, IFIT1, IRF7, and MDA5 (Figure 1D,E). The expression of both IFN-β and IFIT1 was reduced by more than 50% compared to cells expressing vector only. CPV2 E6 did not alter expression levels of IFN-λ2L, IFN-κ, nor the pattern recognition receptors RIGI and IFI16. E7 did not diminish expression of any of the examined IFN or IFN-stimulated genes, but there was a 2–3-fold increase in expression of IFN-λ2L and IRF7. Although neither CPV2 E6 nor CPV2 E7 significantly altered expression of IFN-κ, there was a slight upregulation in both; we considered the possibility of a cumulative effect of E6 and E7 on IFN-κ expression. To address this possibility, we repeated this experiment using canine keratinocytes that expressed both E6 and E7 and found that IFN-κ was not significantly upregulated (Supplemental Figure S2). We also included IFIT1, which was decreased in E6- and E7-expressing keratinocytes similarly to the E6 only expressing cells (Supplemental Figure S2). These results suggest that E6 but not E7 reduces constitutive mRNA expression of a subset of IFNs and IFN-stimulated genes.

3.2. Diminished Poly(dA:dT)-Induction of IFN and IFN-Stimulated Genes by CPV2 E6 and E7 in Canine Keratinocytes

3.3. Diminished Poly(I:C)-Induction of IFN and IFN-Stimulated Genes by CPV2 E6 and E7 in Canine Keratinocytes

3.4. Diminished IFN-β-Induction of IFN-Stimulated Genes by CPV2 E7 but Not E6 in Canine Keratinocytes

CPV2 E6 and E7 both impact expression of the type I and III IFNs and IFN-stimulated genes in canine keratinocytes, albeit likely through different mechanisms.

This research was funded by the Office of Research Infrastructure Programs of the National Institutes of Health (NIH) under award number K01 OD023219-03. 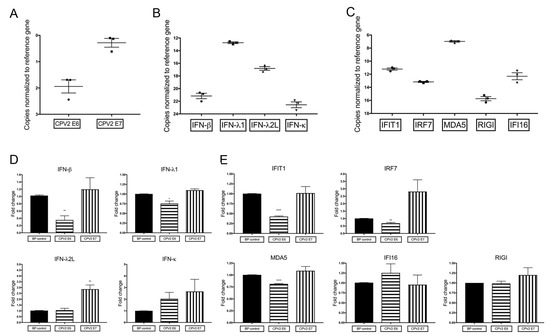 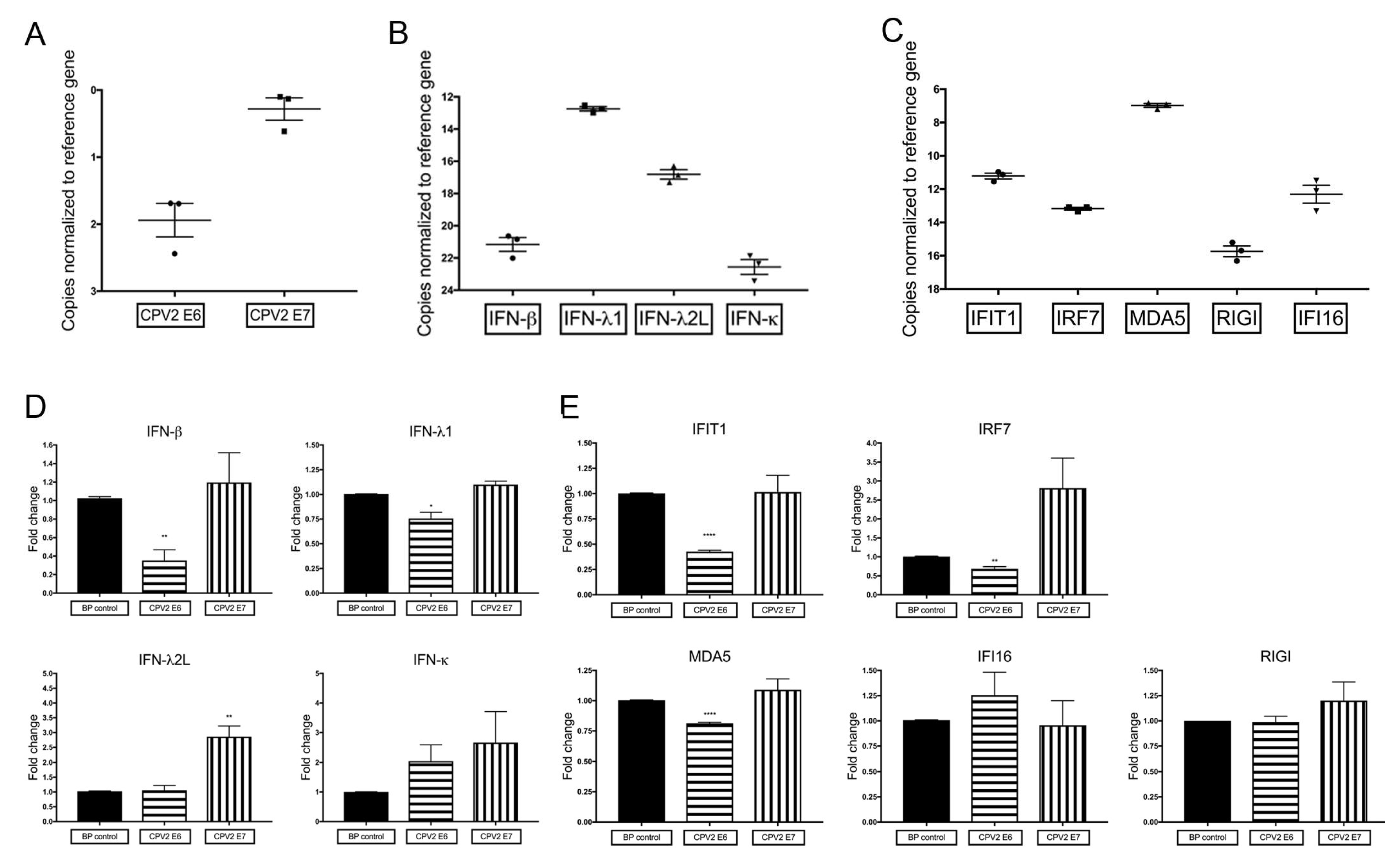 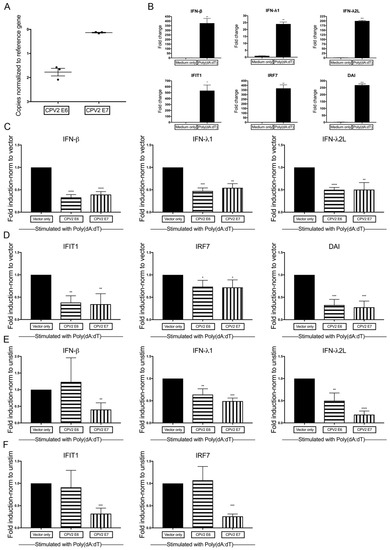 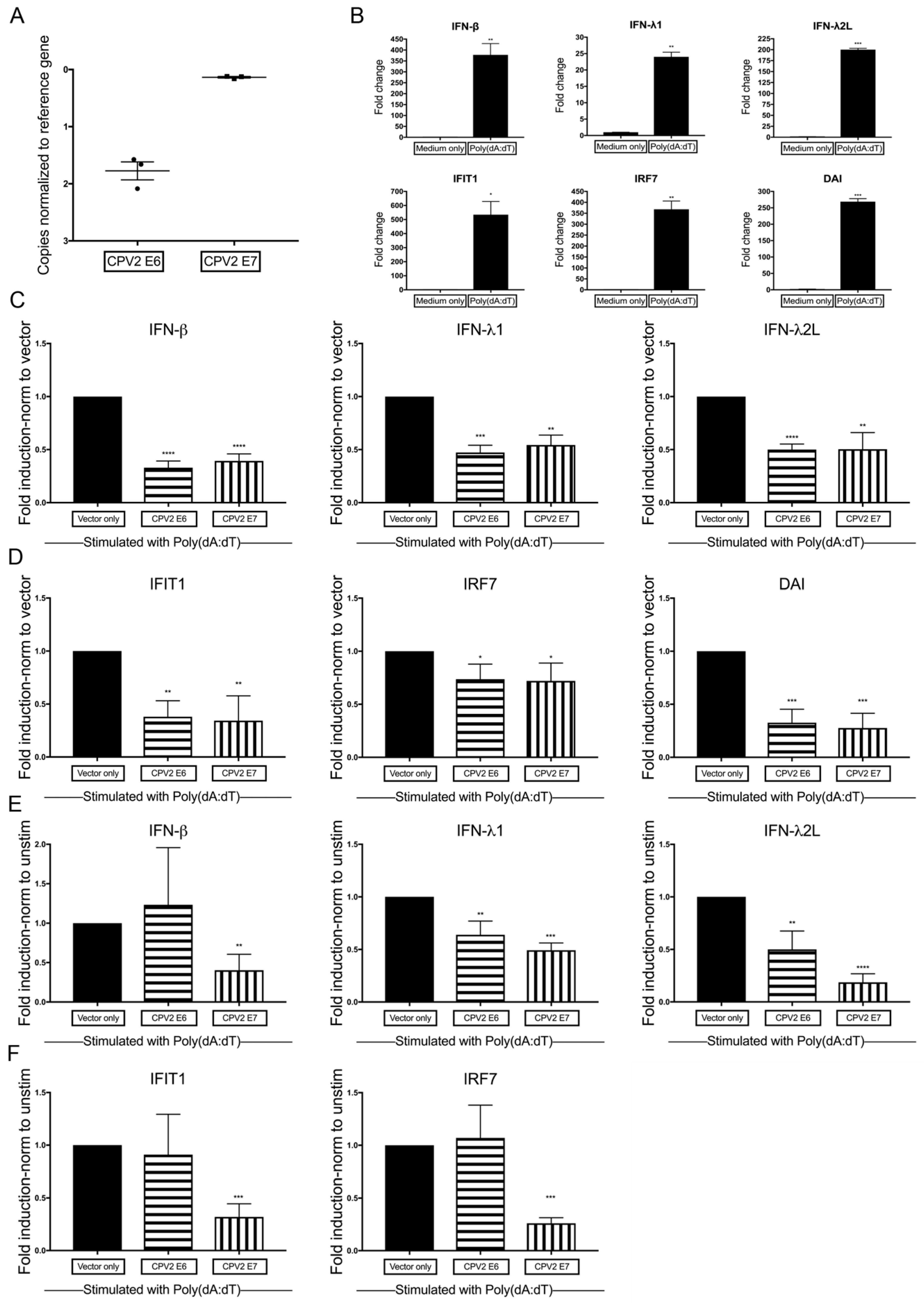 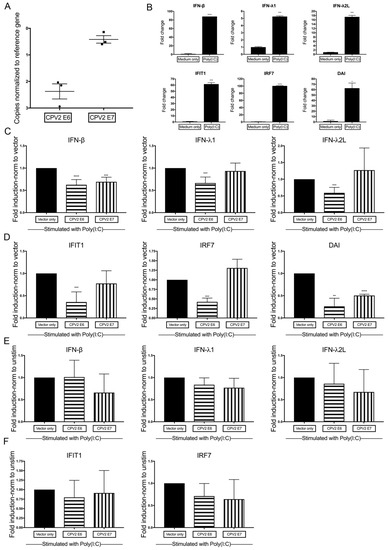 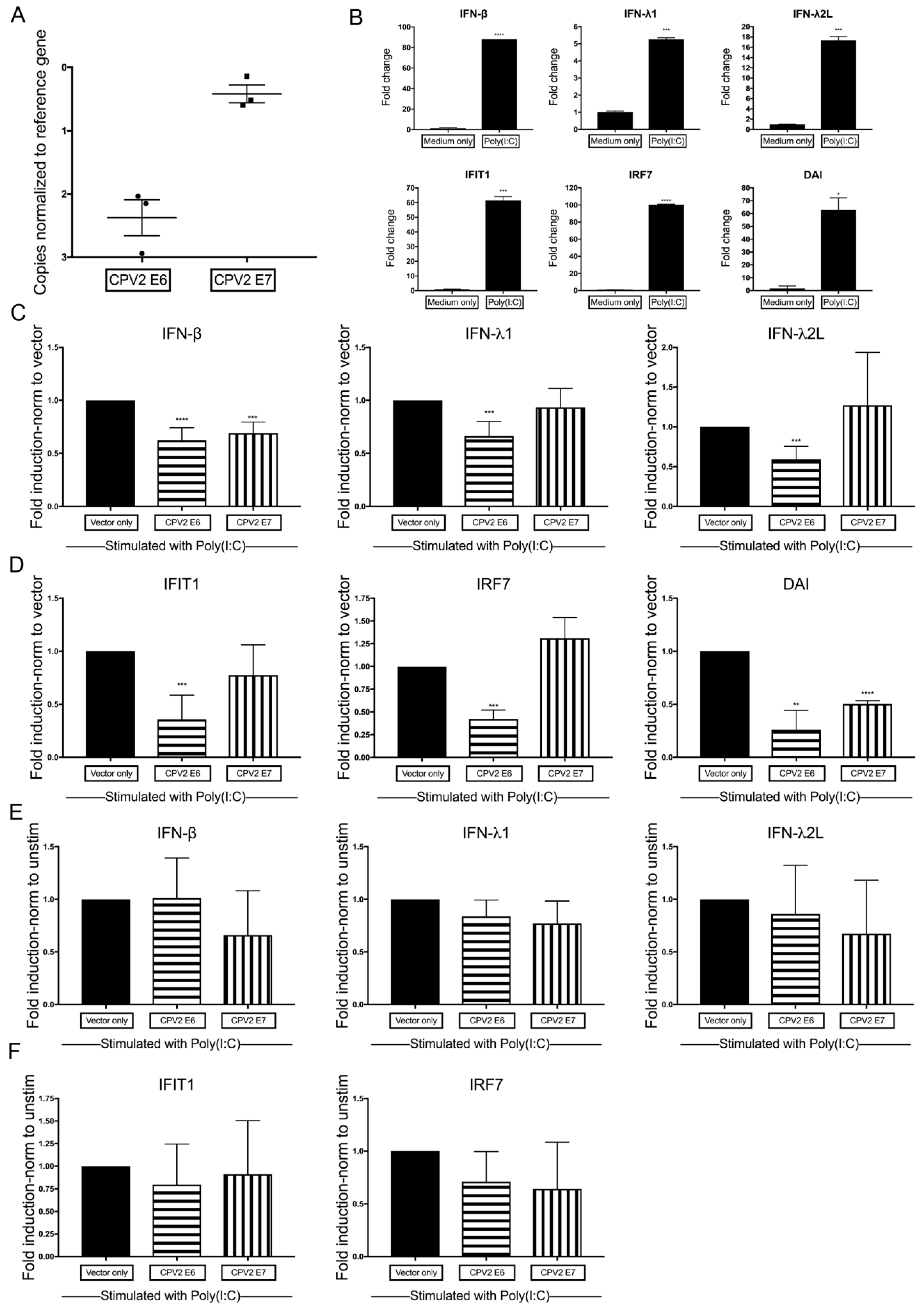 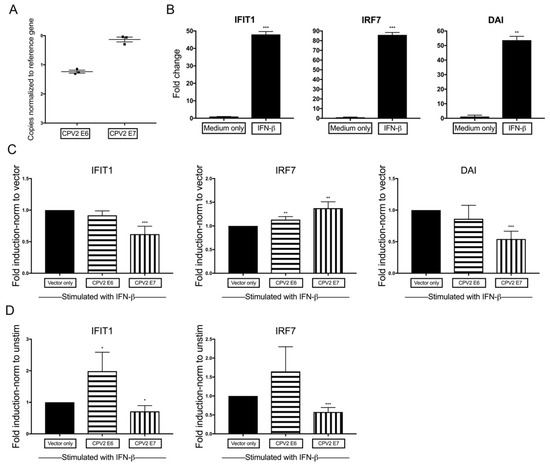 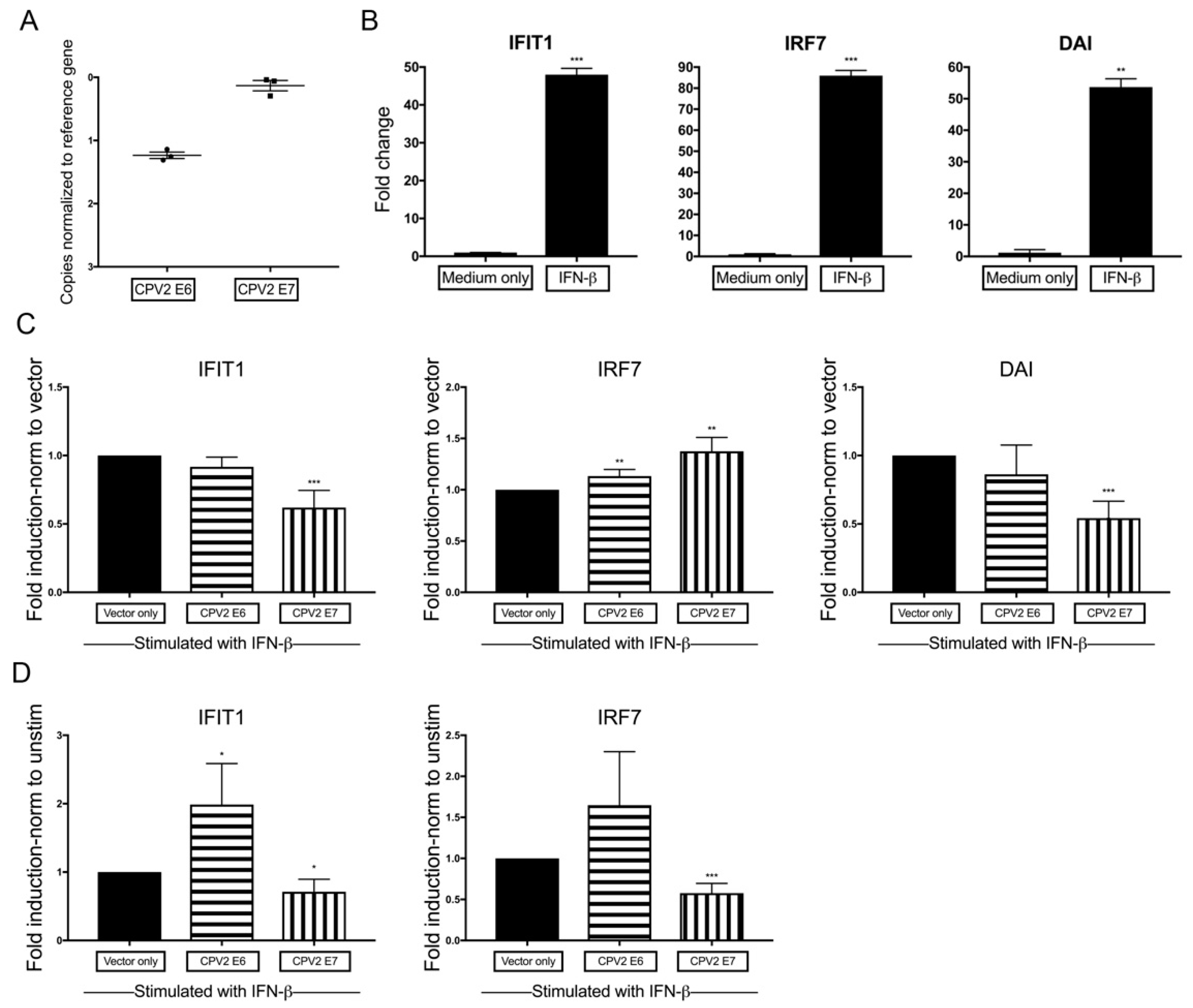 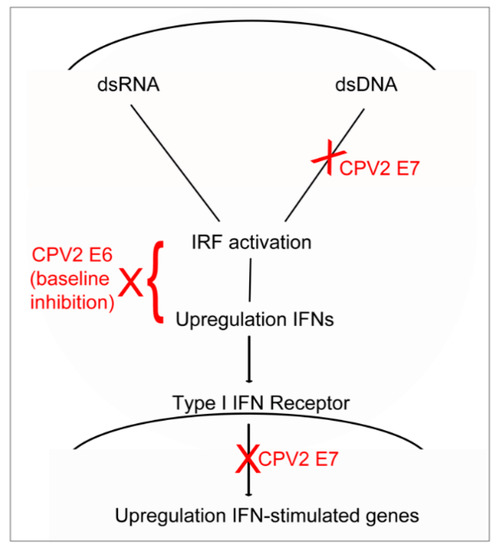 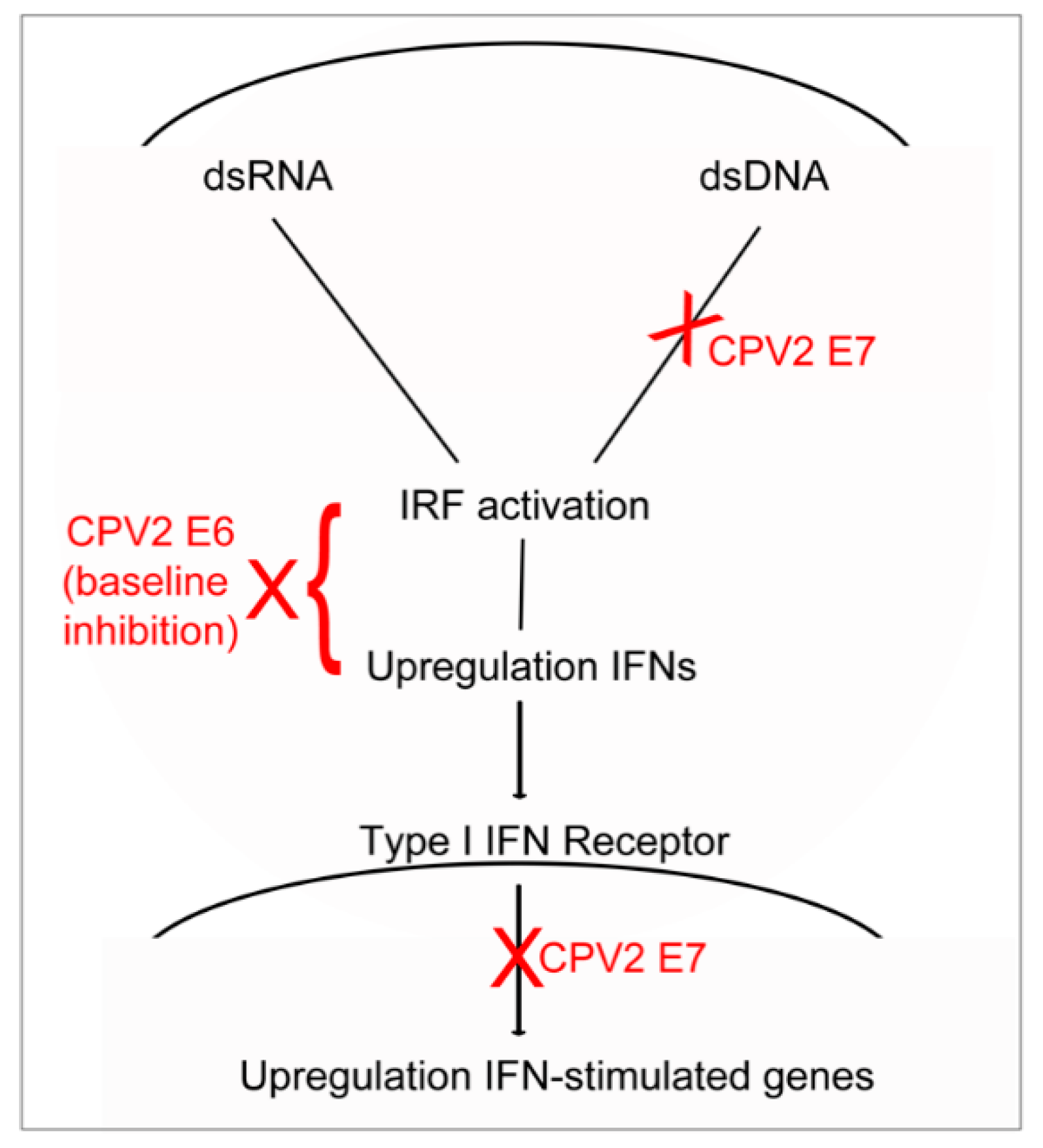