An amphiphilic derivative of chitosan containing quaternary ammonium and myristoyl groups, herein named as ammonium myristoyl chitosan (DMCat), was synthesized by reacting glycidyltrimethylammonium chloride (GTMAC) and myristoyl chitosan (DMCh). The success of the modification was confirmed using Fourier-transform infrared spectroscopy (FTIR) and 1H nuclear magnetic resonance (NMR) spectroscopy. The average degrees of alkylation and quaternization () were determined by using 1H NMR and conductometric titration. The zeta potential of the micelles was higher than 28 mV while its average size and encapsulation efficiency ranged from 280 nm to 375 nm and 68% to 100%, respectively. The in vitro cytotoxicity of the unloaded and curcumin (CUR)-loaded micelles was tested against Caco-2 and HT29-MTX intestinal epithelial cell lines. The results showed no cytotoxic effect from loaded and unloaded micelles as compared to free CUR. In the permeability test, it was observed that both types of micelles, i.e., DMCh and DMCat, improved CUR permeability. Additionally, higher permeability was verified for both systems in Caco-2/HT29-MTX:Raji B because of the mucoadhesive character of chitosan and its ability to open tight junctions. The results indicated that DMCat micelles, due to the physico-chemical, improved characteristics may be a promising carrier to encapsulate CUR aiming cancer therapy. View Full-Text
Keywords: chitosan derivatives; amphiphilic polymers; polymeric micelles; quaternization; curcumin; intestinal delivery chitosan derivatives; amphiphilic polymers; polymeric micelles; quaternization; curcumin; intestinal delivery
►▼ Show Figures 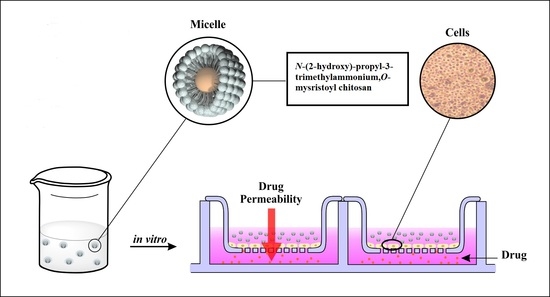