A Sensitive, Point-of-Care Detection of Small Molecules Based on a Portable Barometer: Aflatoxins In Agricultural Products
Previous Article in Journal

Highly toxigenic strains of Aspergillus flavus have been reported to frequently contaminate maize, causing fatal aflatoxin poisoning in Kenya. To gain insights into the environmental and genetic factors that influence toxigenicity, fungi (n = 218) that were culturally identified as A. flavus were isolated from maize grains samples (n = 120) from three regions of Kenya. The fungi were further characterized to confirm their identities using a PCR-sequence analysis of the internal transcribed spacer (ITS) region of rDNA which also revealed all of them to be A. flavus. A subset of 72 isolates representing ITS sequence-based phylogeny cluster and the agroecological origin of maize samples was constituted for subsequent analysis. The analysis of partial calmodulin gene sequences showed that the subset consisted of A. flavus (87%) and Aspergillus minisclerotigenes (13%). No obvious association was detected between the presence of seven aflatoxin biosynthesis genes and fungal species or region. However, the presence of the aflD and aflS genes showed some association with aflatoxin production. The assessment of toxigenicity showed higher aflatoxin production potential in A. minisclerotigenes isolates. Given that A. minisclerotigenes were mainly observed in maize samples from Eastern Kenya, a known aflatoxin hotspot, we speculate that production of copious aflatoxin is an adaptative trait of this recently discovered species in the region. View Full-Text
Keywords: Aspergillus flavus; Aspergillus minisclerotigenes; internal transcribed spacer; calmodulin; aflatoxigenicity; aflatoxin biosynthesis genes; Kenya Aspergillus flavus; Aspergillus minisclerotigenes; internal transcribed spacer; calmodulin; aflatoxigenicity; aflatoxin biosynthesis genes; Kenya
►▼ Show Figures 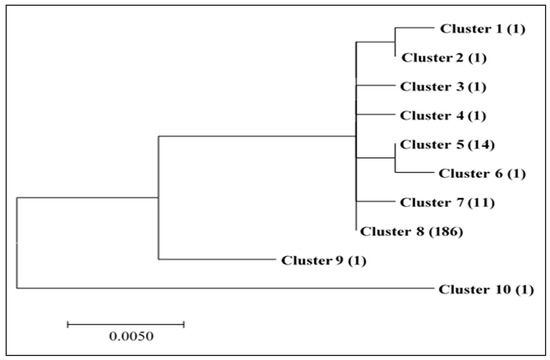