Bivalve molluscs represent an important food source within the Philippines, but the health of seafood consumers is compromised through the accumulation of harmful algal toxins in edible shellfish tissues. In order to assess the dynamics of toxin risk in shellfish, this study investigated the uptake, depuration, assimilation, and analogue changes of paralytic shellfish toxins in Perna viridis. Tank experiments were conducted where mussels were fed with the toxic dinoflagellate Alexandrium minutum. Water and shellfish were sampled over a six day period to determine toxin concentrations in the shellfish meat and water, as well as algal cell densities. The maximum summed toxin concentration determined was 367 µg STX eq./100 g shellfish tissue, more than six times higher than the regulatory action limit in the Philippines. Several uptake and depuration cycles were observed during the study, with the first observed within the first 24 h coinciding with high algal cell densities. Toxin burdens were assessed within different parts of the shellfish tissue, with the highest levels quantified in the mantle during the first 18 h period but shifting towards the gut thereafter. A comparison of toxin profile data evidenced the conversion of GTX1,4 in the source algae to the less potent GTX2,3 in the shellfish tissue. Overall, the study illustrated the temporal variability in Perna viridis toxin concentrations during a modelled algal bloom event, and the accumulation of toxin from the water even after toxic algae were removed. View Full-Text
Keywords: saxitoxin; harmful algal blooms; biotransformation; uptake; depuration; assimilation; shellfish; Perna viridis; Alexandrium saxitoxin; harmful algal blooms; biotransformation; uptake; depuration; assimilation; shellfish; Perna viridis; Alexandrium
►▼ Show Figures 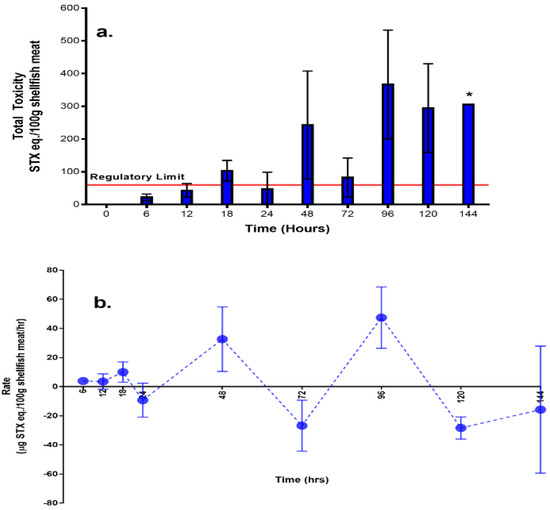