What Is Urban after All? A Critical Review of Measuring and Mapping Urban Typologies in Portugal

The classification of the territory as urban, either from a morphological approach for spatial or territorial planning or from an administrative perspective, was discussed through an extensive literature review that stresses the advantages and the weaknesses of both approaches.
Using the Portuguese case and data provided by official authorities that support the different classifications, the territorial extension of the urban was mapped accordingly. Comparisons were made, first by comparing the classifications under a morphological approach (CRUS and COS) and later the classifications under an administrative and statistical approach. The different criteria used by the two statistical authorities to establish the typologies was studied based on the assumptions described in the Data Sources section.
The differences in terms of area classified as urban and its distribution across the territory were highlighted.
A detailed analysis was carried out, combining demographic and socio-economic indicators to assess the classifications taking into consideration the reality of the territory. A set of relevant examples were selected to show inadequacies either from the point of view of the territorial reality or its statistical coherence.
Finally, a reflection was made on the consequences of using typologies of the urban in the definition of territorial policies and in their use for statistical international comparisons. Figure 2 summarises the different methodological stages of the study.

The materials described above were analysed and combined with other indicators in order to provide a framework for the discussion of the urban dimension issue for policy making and respective planning actions, considering territorial cohesion.
The analyses were carried out looking first at the classification of the urban in morphological terms, with COS and CRUS being the main sources of information, and later for the classifications based on the administrative status of the parishes, as defined by Statistics Portugal and Eurostat (TIPAU and DEGURBA).

3.1. Concerning the Morphological Classification of the Urban

The artificial territories class for the COS map, within the urban perimeters defined by the master plans (CRUS), occupy 3501 sq.km, corresponding to 3.9% of the Mainland Portuguese territory (Figure 4A). These artificial territories, even though only those within the urban perimeters were considered, do not necessarily show the urban character of a human settlement per se. The physical or architectural objects of small rural villages are, according to the COS classification, artificialized surfaces, but lack an extent, or a number of inhabitants, to have that character. Even in terms of planning issues, rural settlements are classified as rural land (Decree Law No. 15/2015).
As the delimitation of this land use class is derived mainly from aerial photo interpretation and therefore does not take in to account any administrative or statistical units from census surveys, the determination of the number of inhabitants residing in these areas cannot be precise. However, in considering the statistical subsections that have their centroid within these artificial territories, to look at the resident population, 6,441,202 inhabitants lived within these areas, in 2011. This means that 64.1% of the Mainland Portuguese population lived in artificialized territories with an urban perimeter defined by the Master plan, which does not necessarily mean urban population. If only the set of these territories that falls within localities with more than 5000 inhabitants are considered, then just 1.4% of the Mainland Portuguese territory would be urban, i.e., 47% of the total population.
Urban perimeters defined by the master plans and gathered in the 2016 CRUS map, along with other land use regime classes, demarcate areas that are urbanised or for urban development. Despite certain omissions and disparities identified by General Directorate for Territory Development, 6458 sq.km were delimited throughout the Mainland Portuguese territory and 7,887,055 inhabitants (78% of the total population) lived within these areas. Like COS, these urban perimeters do not necessarily mean delimitations of urban areas, but rather human settlements of different sizes and hierarchical importance in the urban panorama of the country, marked off for planning purposes. Moreover, expansion areas are considered here and despite the guidelines of the National Programme for Spatial Planning Policies, in order to contain areas intended for urbanisation, these areas were often oversized in view of the population decrease verified [53], and in other situations corresponded to mere expectancies for further urbanisation developments, often associated with second residencies and tourist activity.
Following the same methodology used for COS, considering only the set of these territories which are within localities with more than 5000 inhabitants, the urban area is then 1961 sq.km (2.2%) and the population 5,370,705 (53.4%).

3.2. Concerning Administrative Classification of the Urban

3.3. Demographic and Socio-Economic Indicators of the Urban

This study has shown that the “map” of the urban is significantly distinct depending on the different official institutions that provide this information. The classification of the parish territorial unit in Portugal, (LAU2) according to the criteria of DEGURBA and TIPAU, can create an inaccurate perspective of the urban dimension from the national perspective and therefore have political, planning and management consequences for the territories which resulted from this process. A few arbitrary choices were made, which have needed to be discussed, and certain inaccuracies appear evident. Furthermore, the administrative reorganisation of the territory of the parishes (carried out in 2013), resulting in the amalgamation of various distinct territories, should have been a reason for reviewing the urban classification criteria by Statistics Portugal.
If the DEGURBA and TIPAU criteria are considered to form a valid basis, significant improvements are needed before submitting the results for validation by Member States: (i) some parishes have not been correctly classified; (ii) the weighting of the importance of the presence of municipal headquarters is too strong in the TIPAU classification (which may not make sense when this has a residual expression); (iii) a participatory classification involving the parish assembly is needed; (iv) a new revised parish map revision should be considered.
To promote equivalent access to essential goods and services in rural and urban areas, and therefore to achieve the desirable goal of territorial cohesion through the allocation of appropriate resources, a different and insightful approach to identifying what is urban is desirable.

This research was funded by CIAUD-Research Centre for Architecture, Urbanism and Design, grant number UIDB/04008/2020.

The authors would like to thank DGT—Direção Geral do Território—for providing data concerning CRUS. The authors would also like to express their gratitude to Professor João Cabral for the valuable contributions on proofreading. 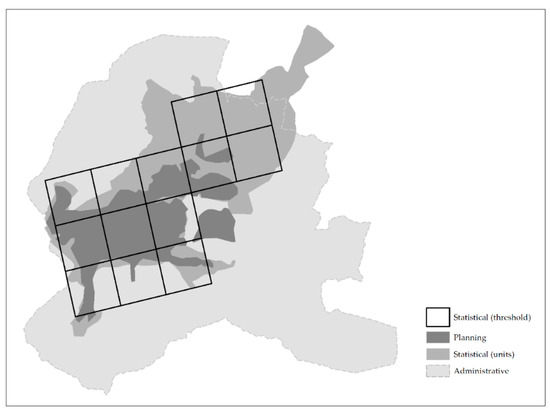 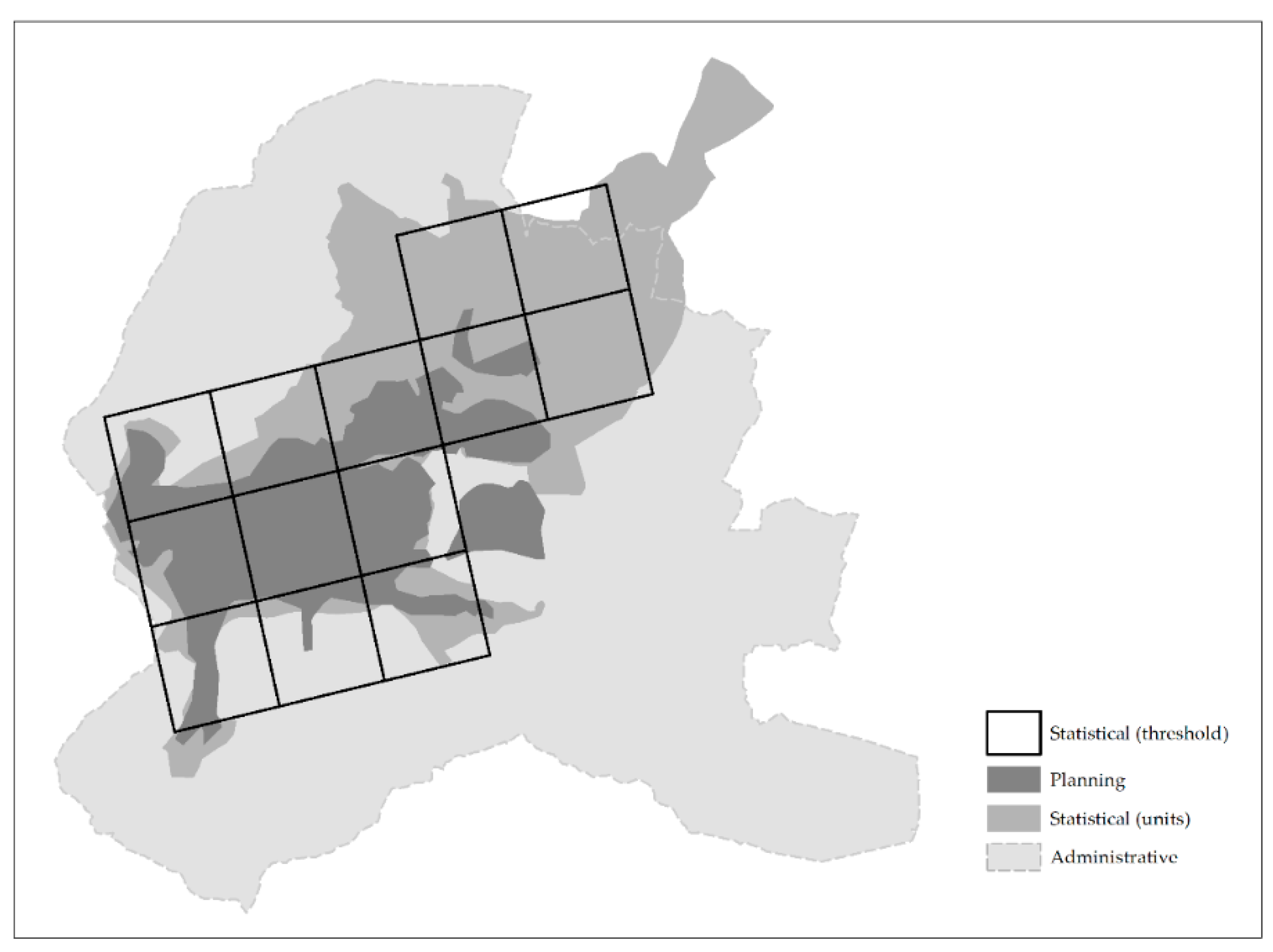 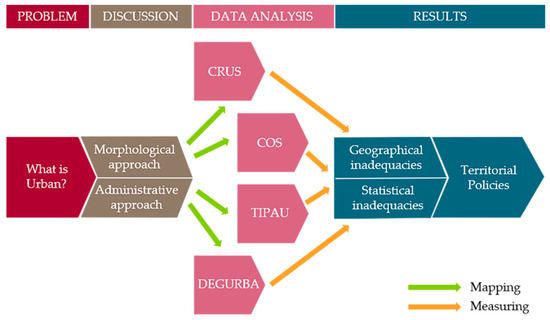 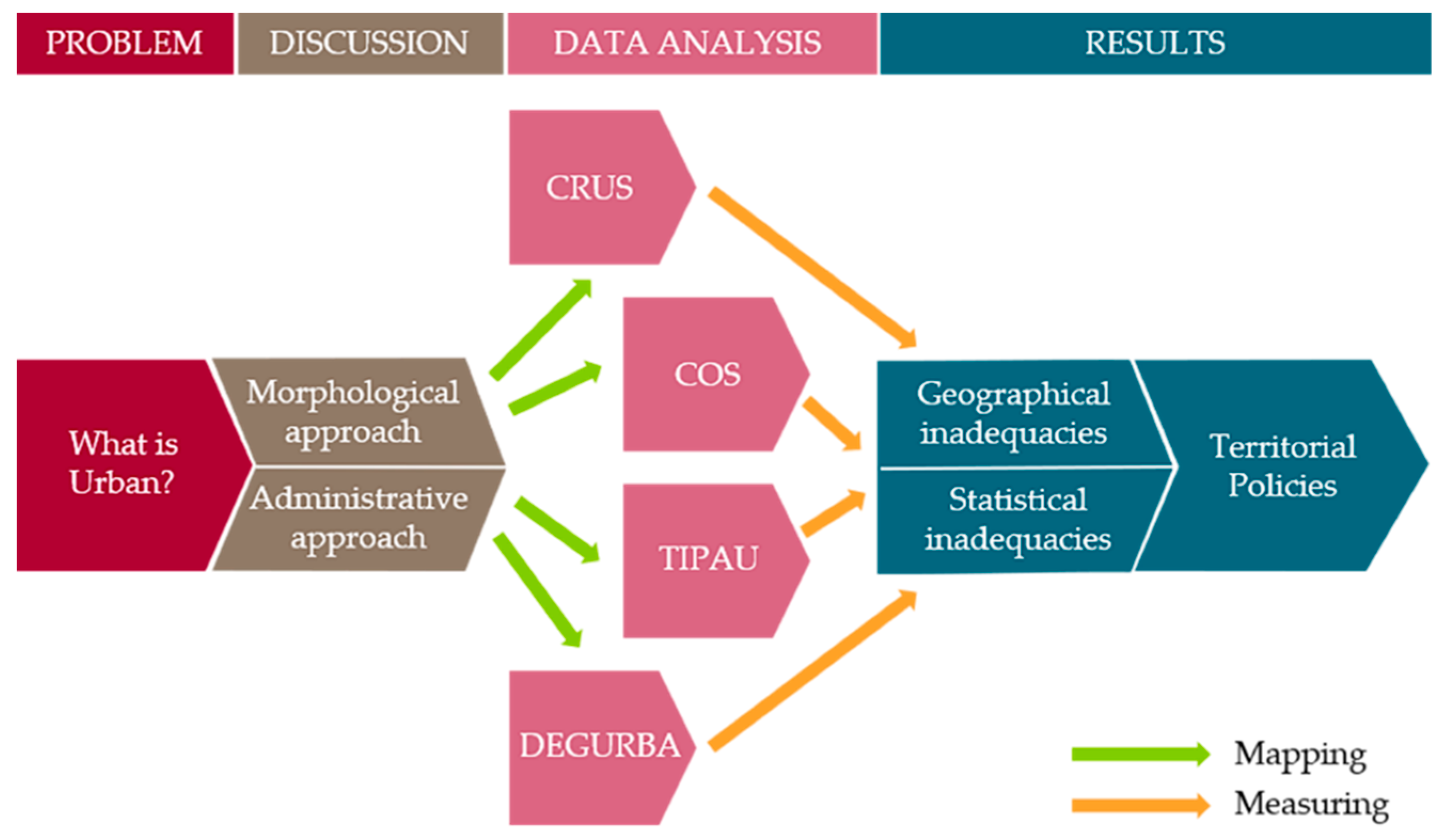 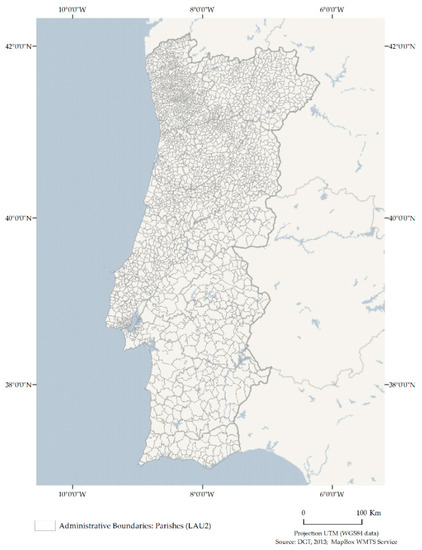 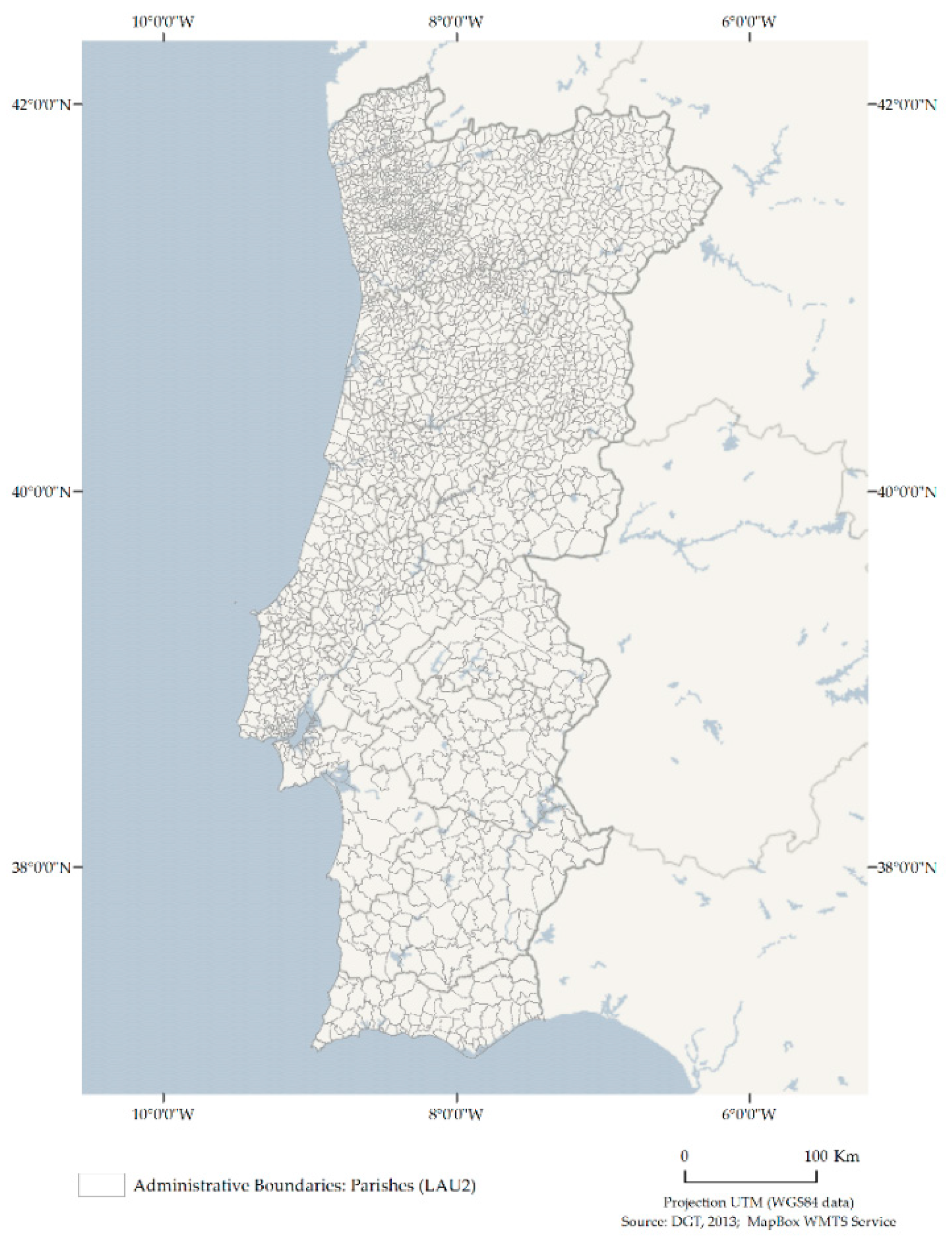 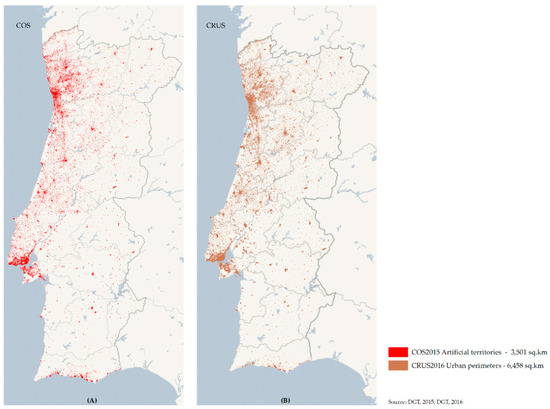 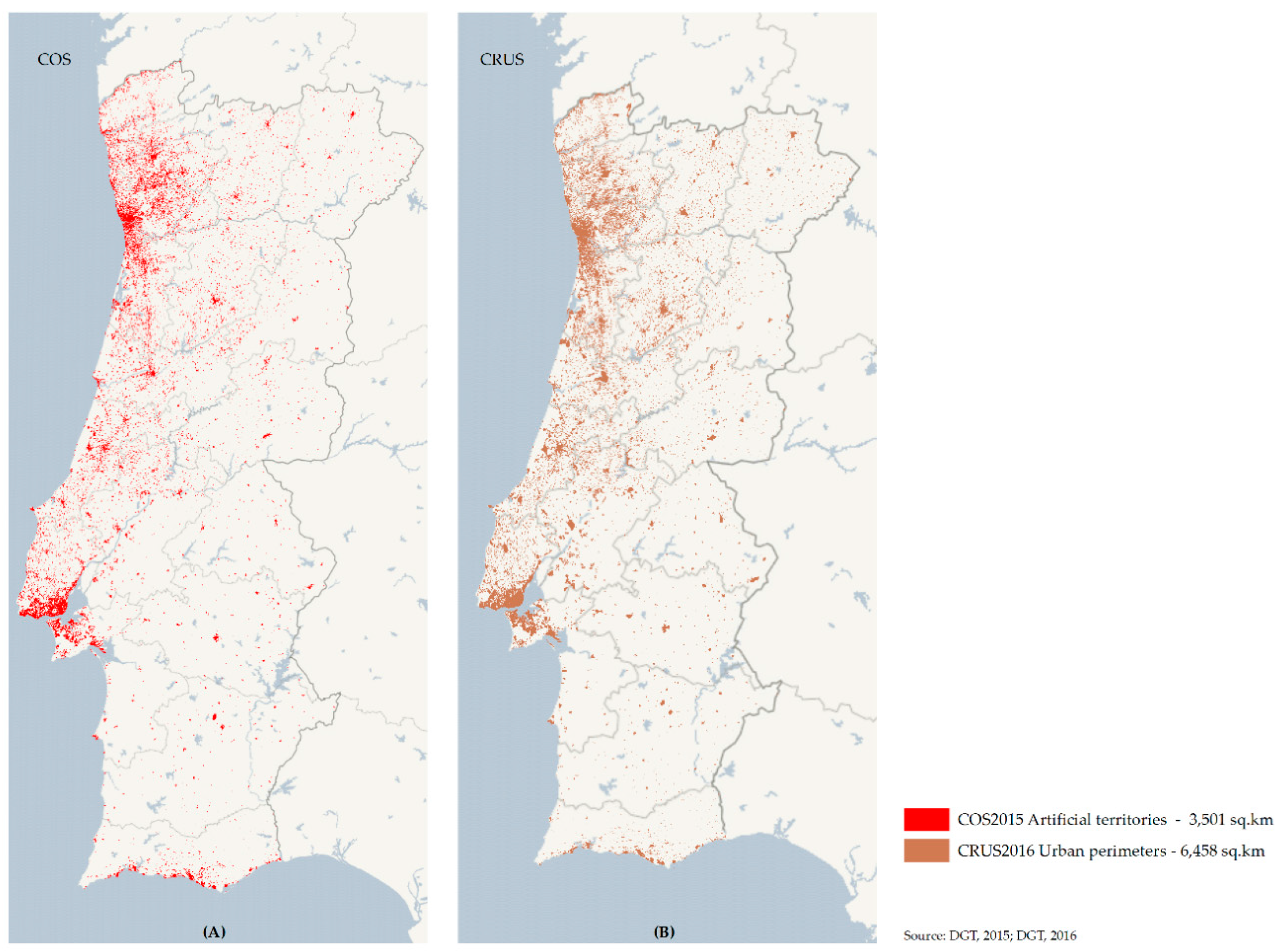 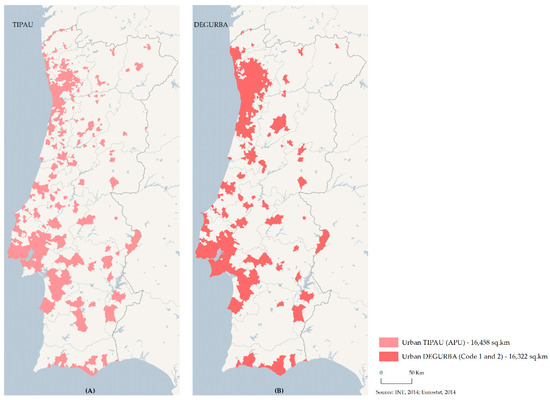 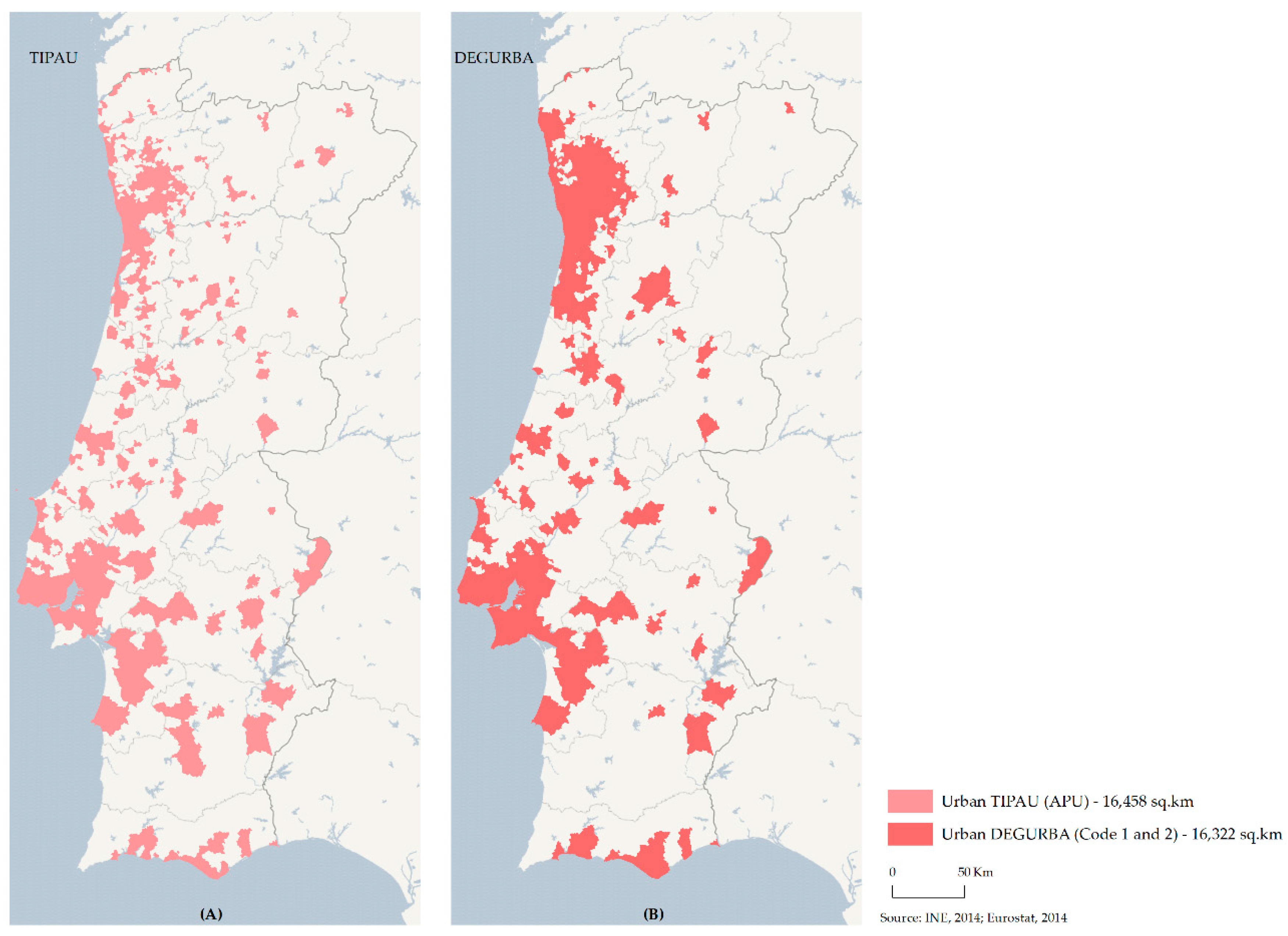 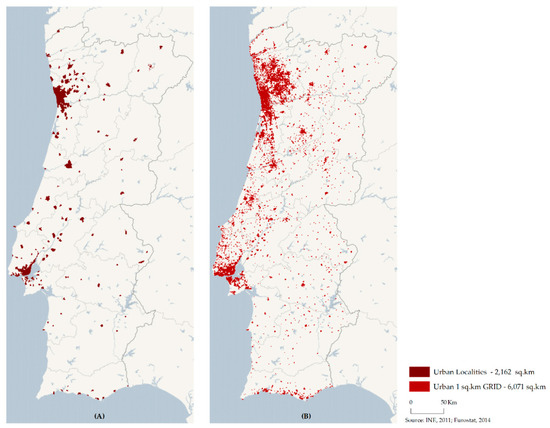 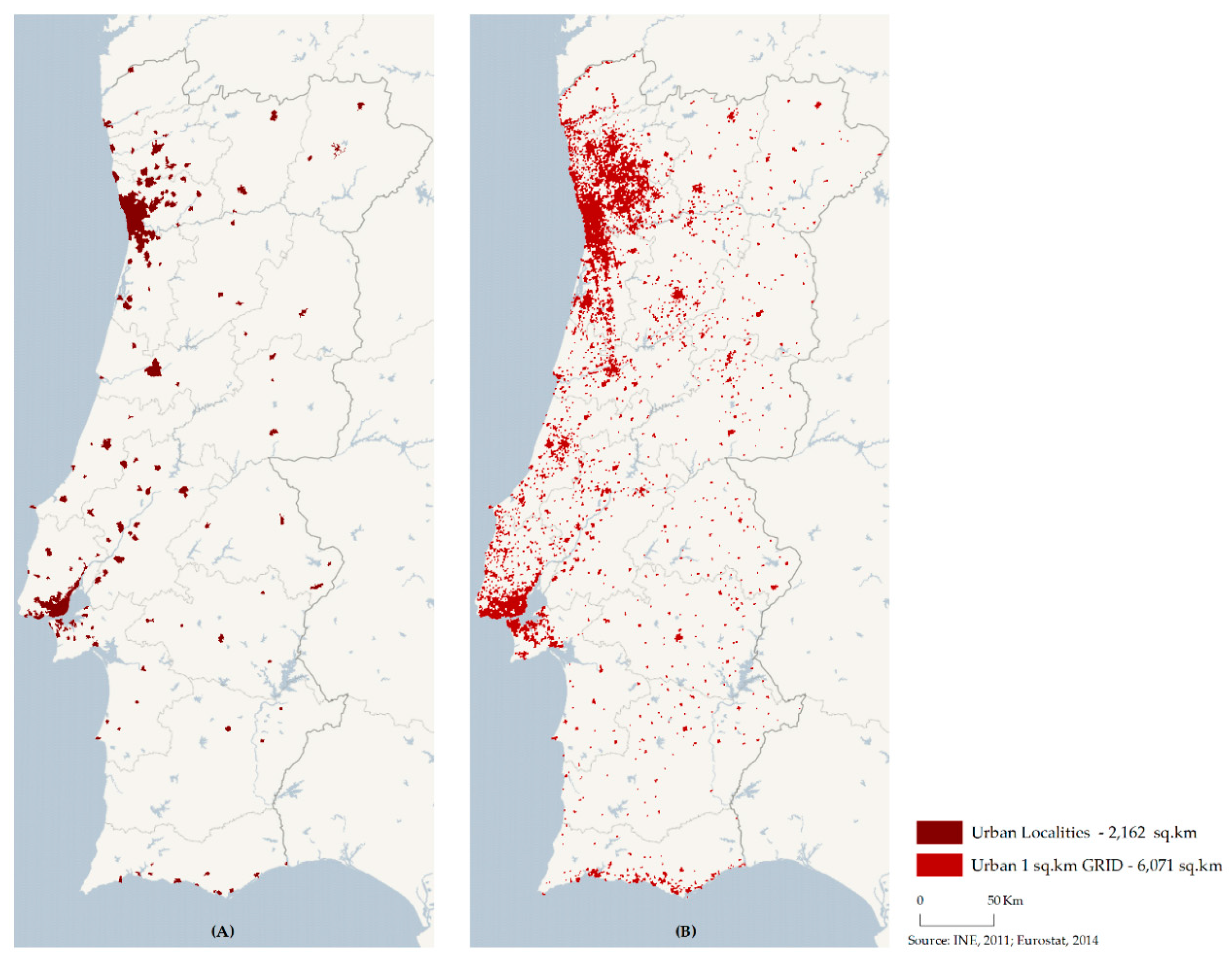 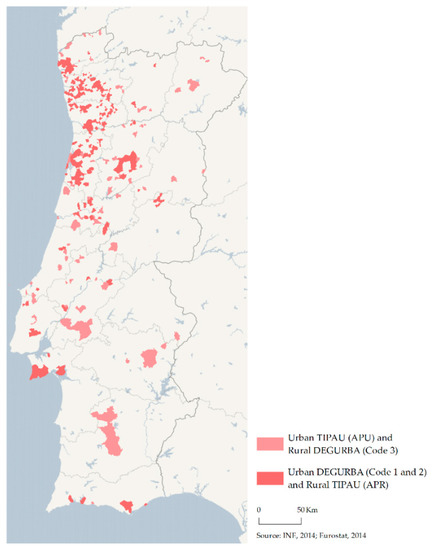 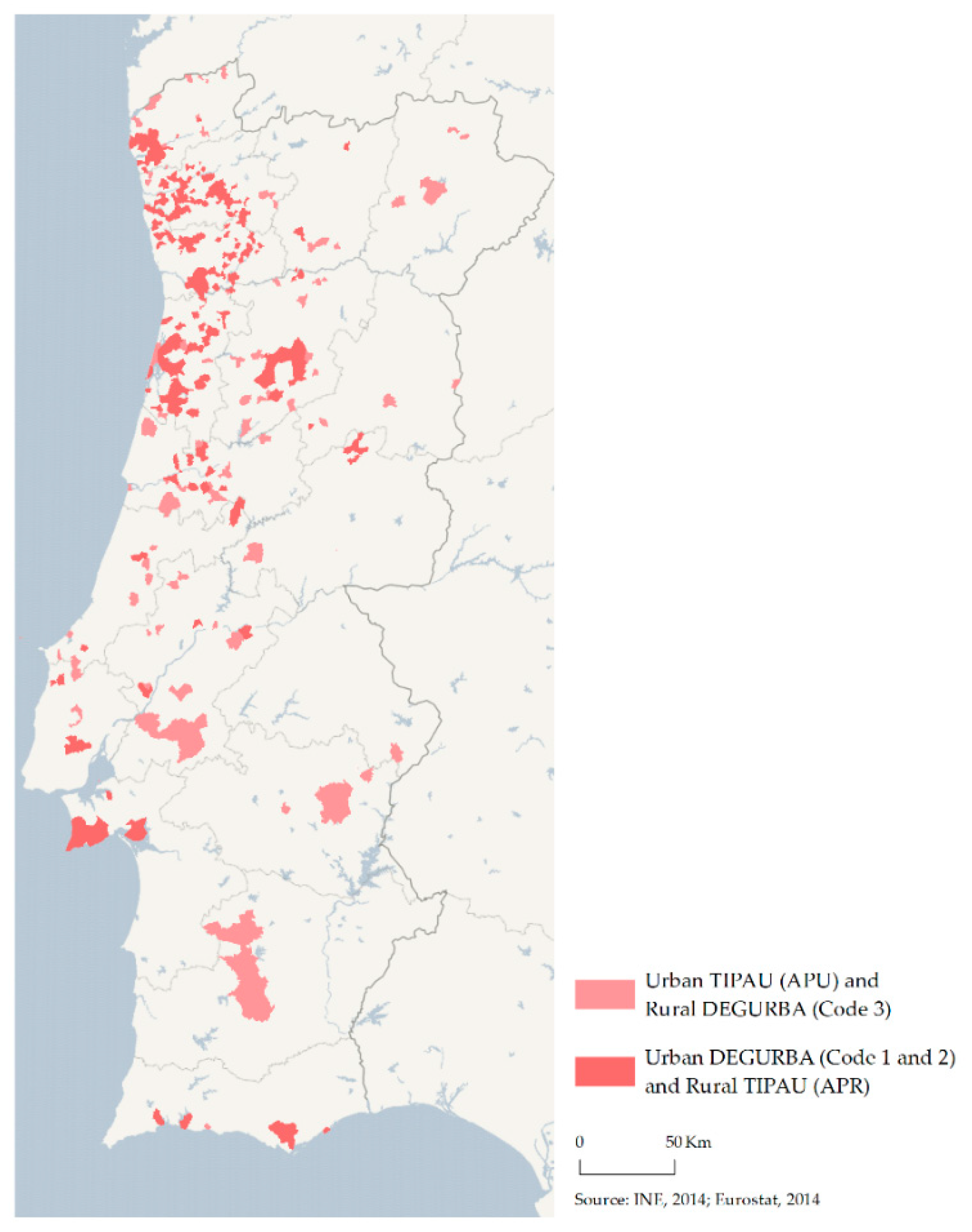 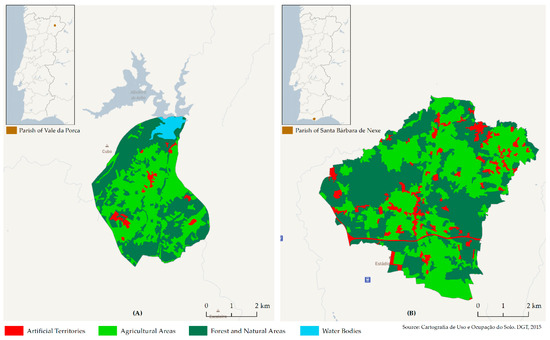 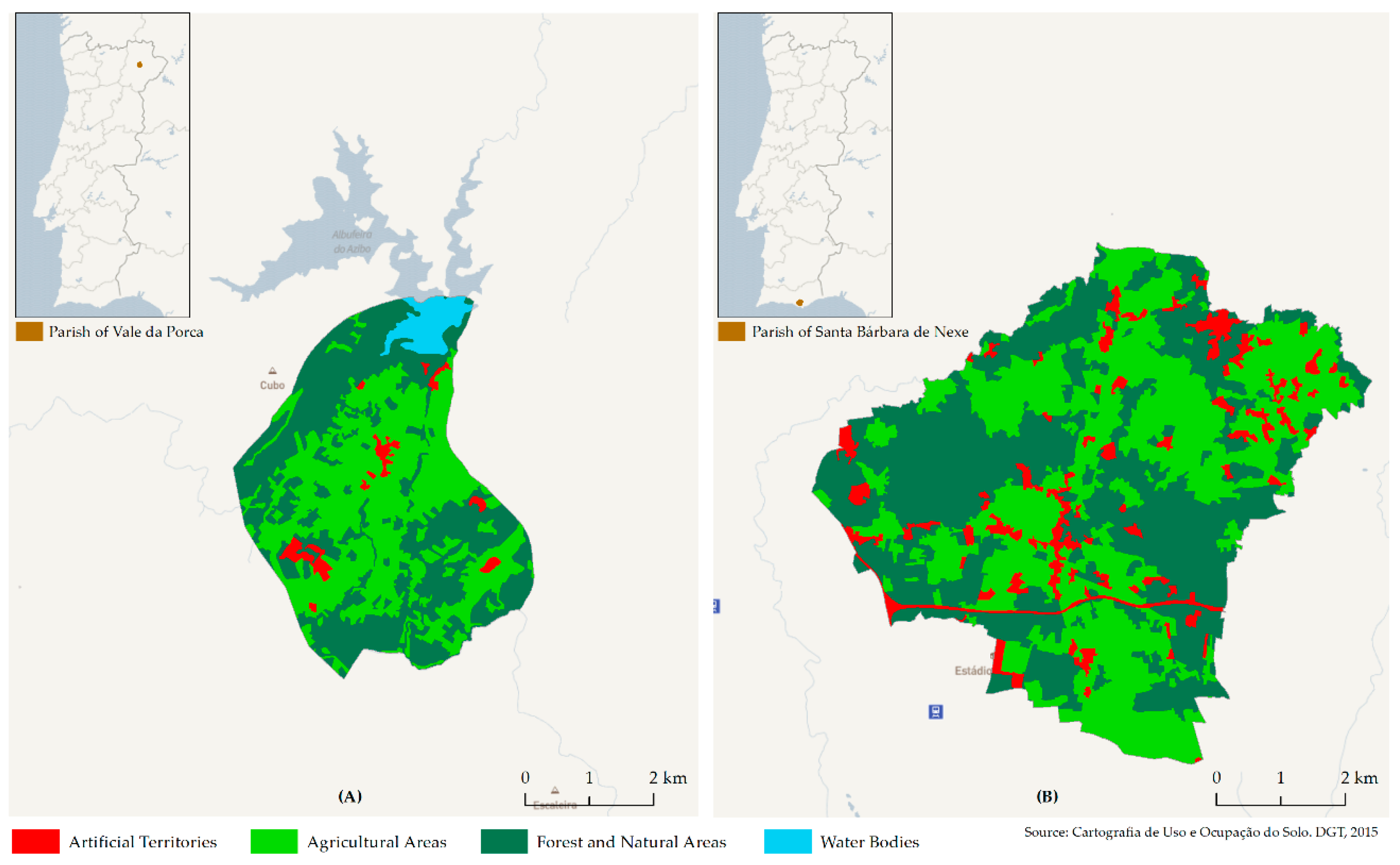 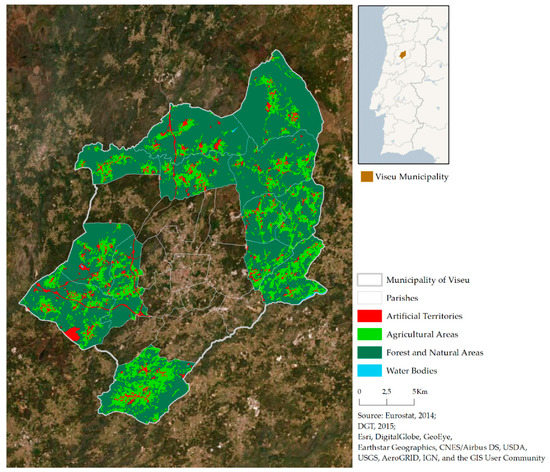 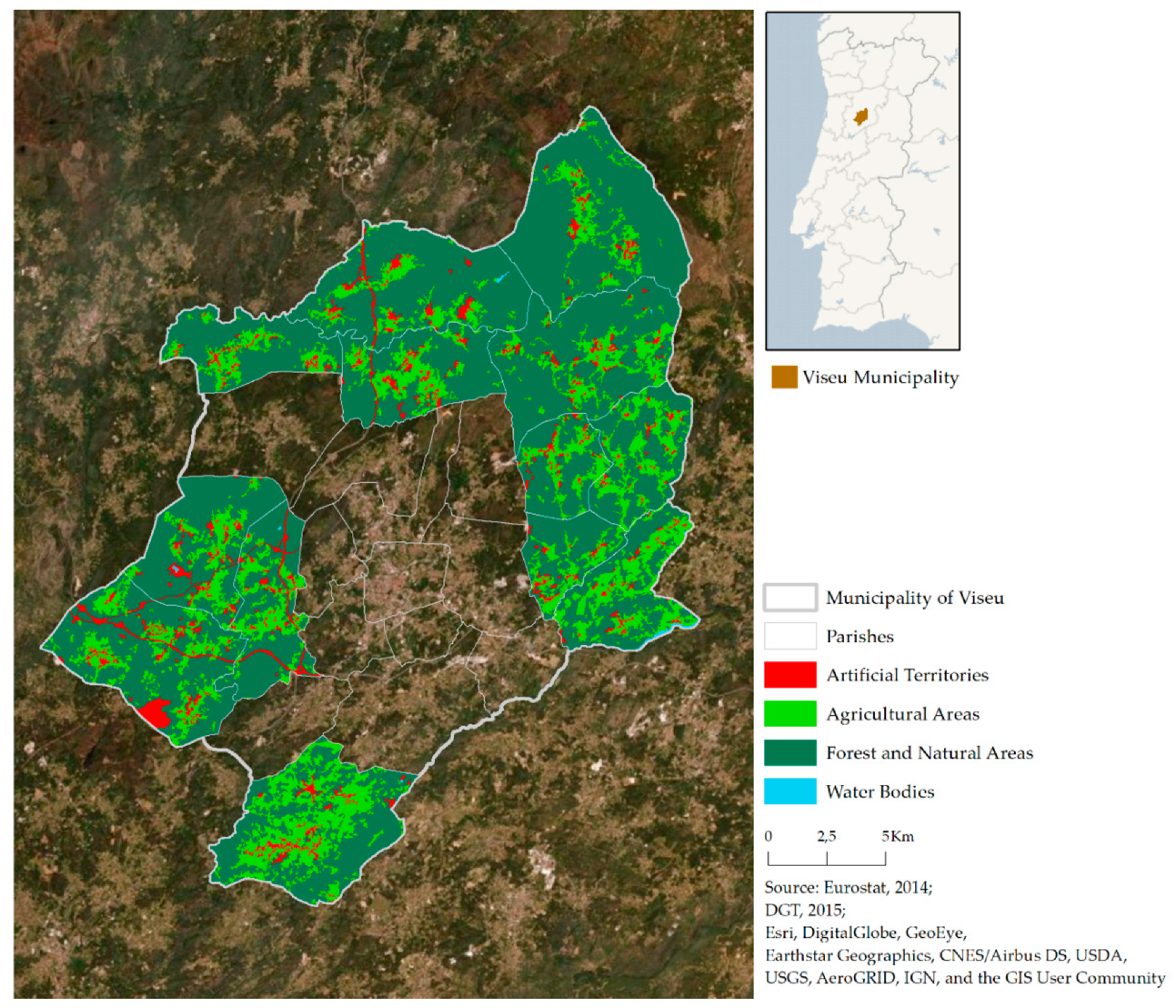 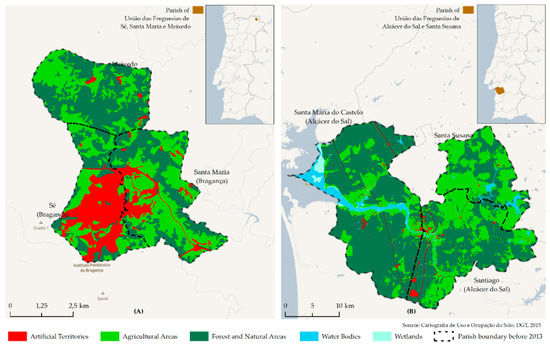 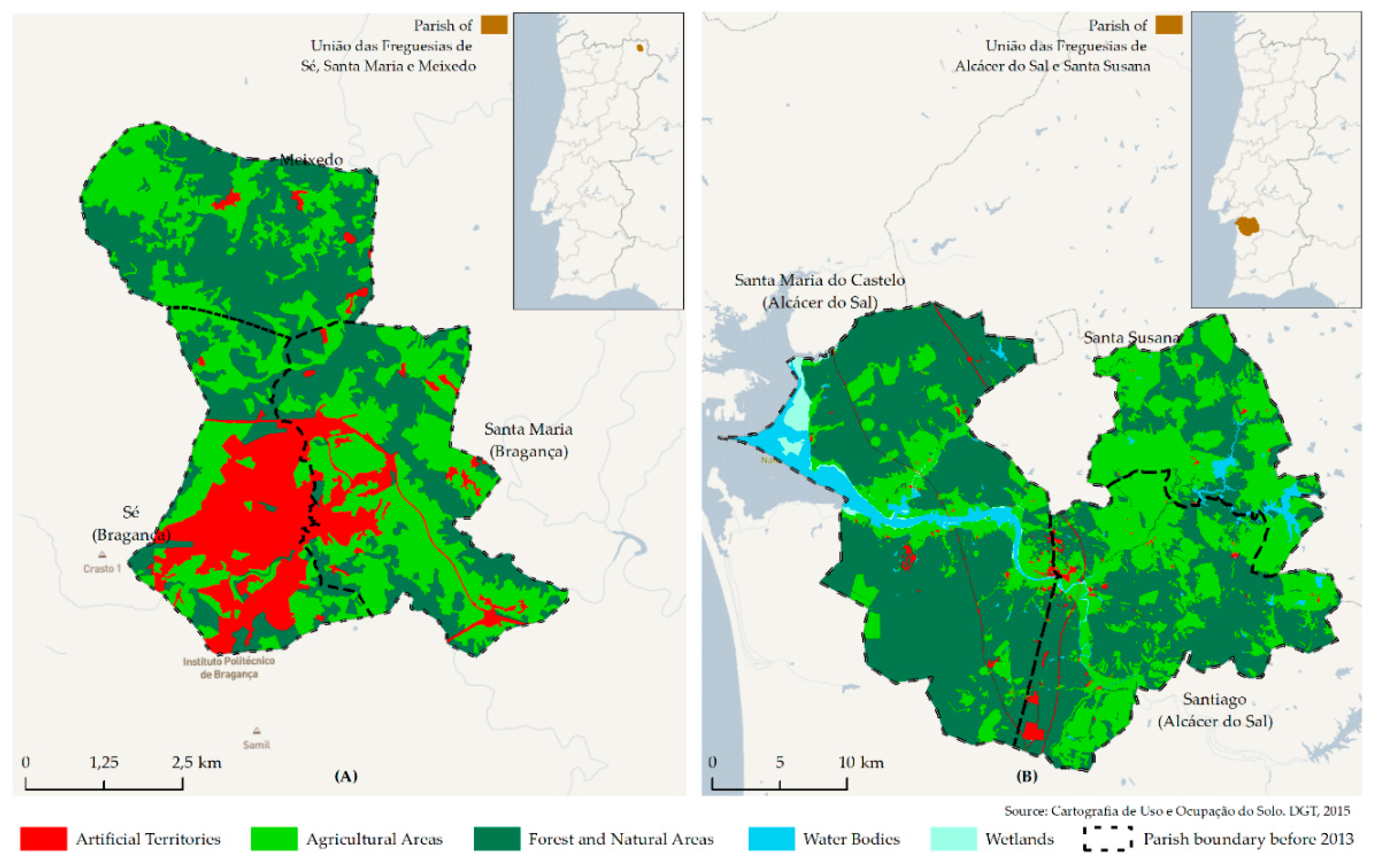 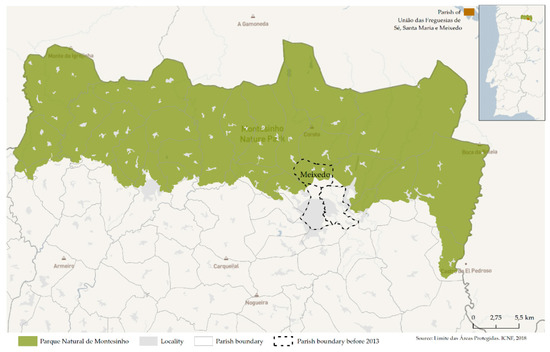 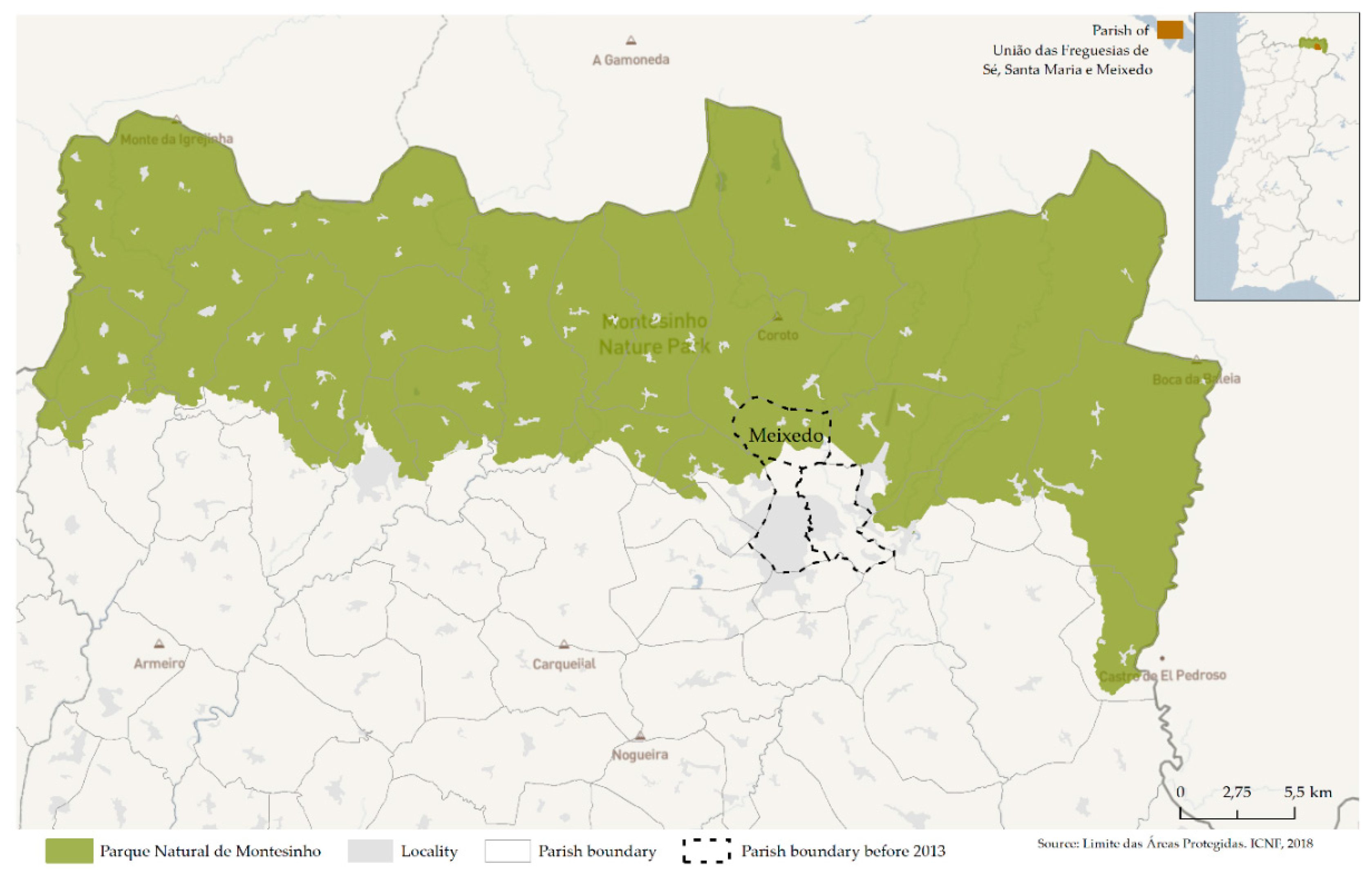 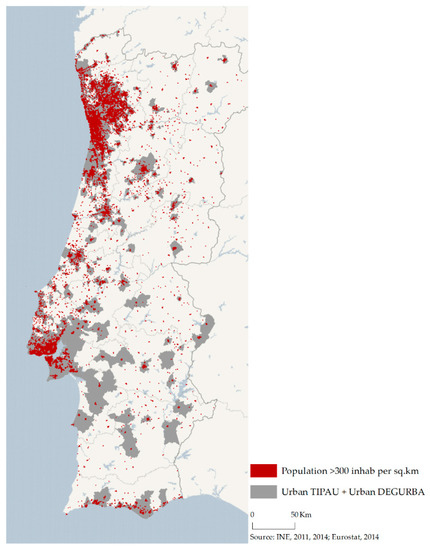 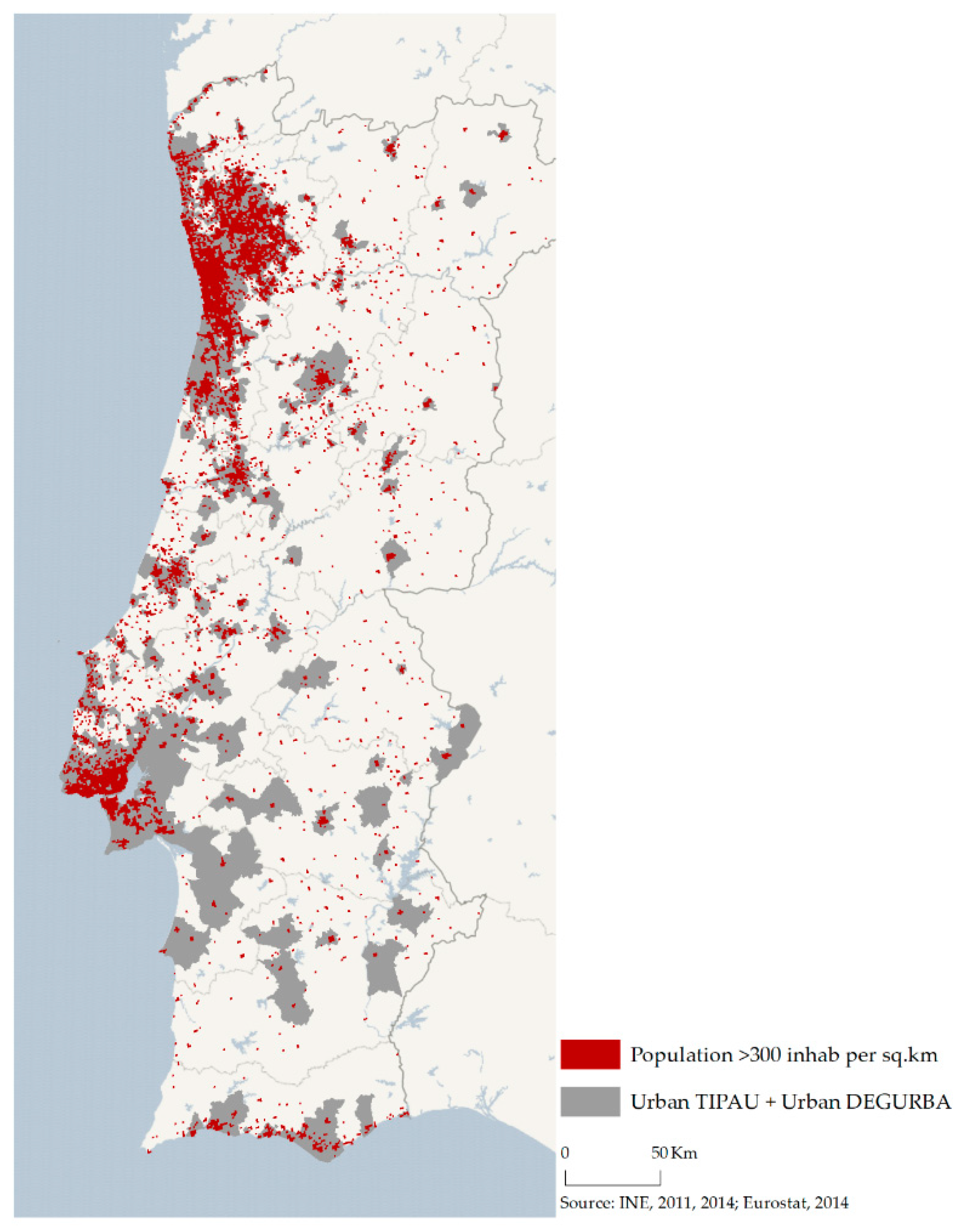 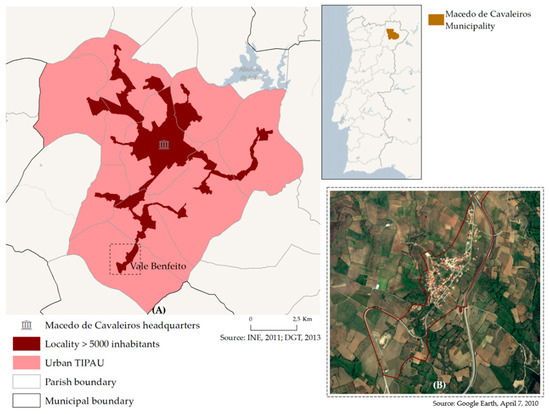 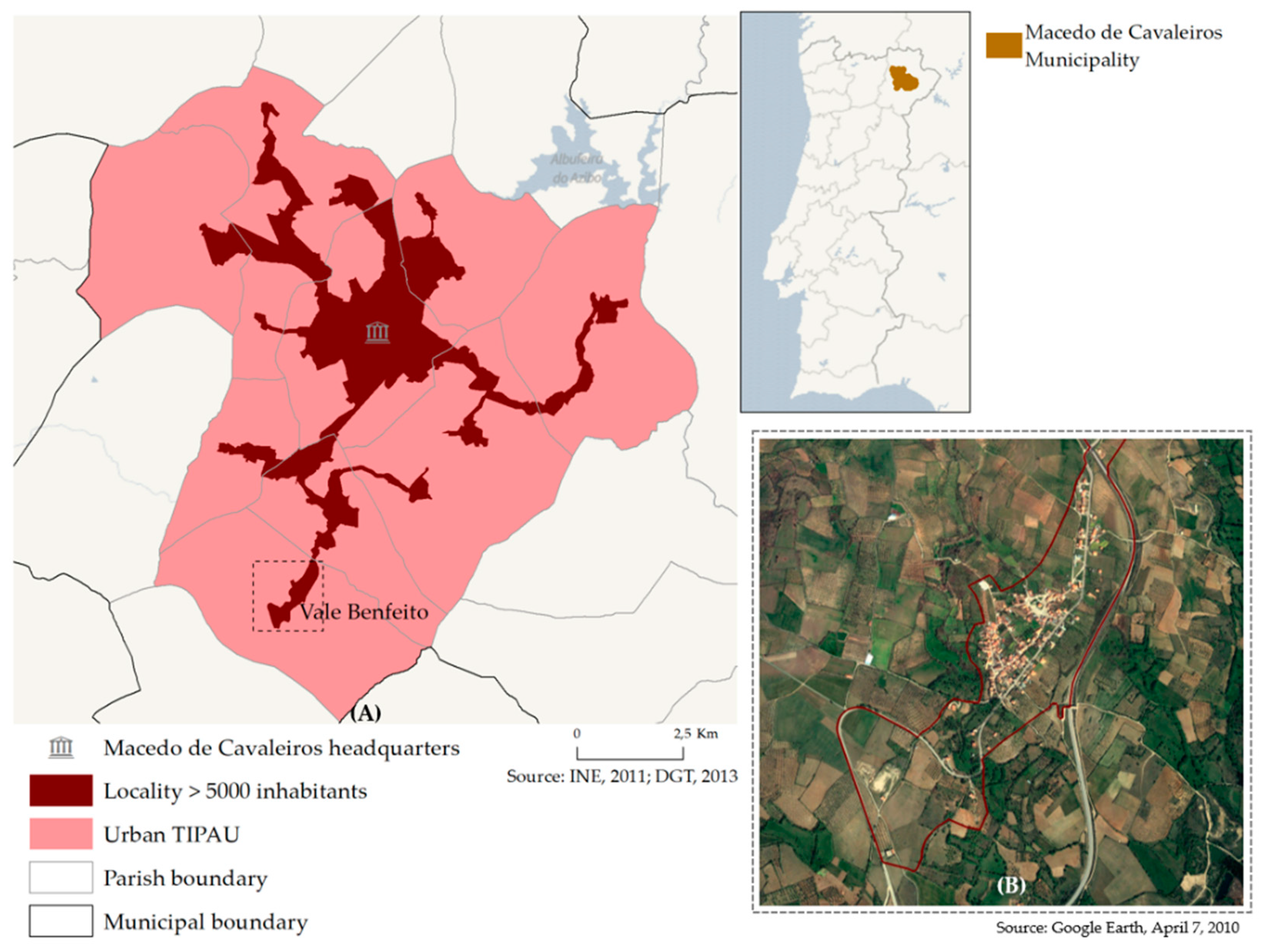