Morphology, Transcriptomics and In Vitro Model of Skin from Polar Cod (Boreogadus Saida) and Atlantic Cod (Gadus Morhua)
Next Article in Special Issue

Ruffe (Gymnocephalus cernua) were introduced to North America from Europe in the mid-1980s and based on similar diets and habit use may compete with yellow perch (Perca flavescens). To examine competitive interactions between invasive ruffe and native yellow perch, individually marked perch and ruffe were placed in mesocosms in a small lake. Mesocosms allowed fish to interact and feed on the natural prey populations enclosed. In the first experiment, four treatments were assessed: 28 perch, 14 perch + 14 ruffe, 14 perch, and 7 perch + 7 ruffe. Yellow perch growth was significantly lower in the presence of ruffe (ANOVA, p = 0.005) than in treatments containing only perch. In a second experiment, an increasing density of one species was superimposed upon a constant density of the other in parallel treatment series. Growth rates of both ruffe and perch declined when ruffe density was increased (t test, p = 0.006). However, neither ruffe nor perch growth was affected by increasing perch density. Total stomach content mass of perch was significantly decreased by ruffe in both years (p < 0.02), but no effects of ruffe on the composition of perch diets were observed. Ruffe growth and food consumption was greater than that of perch for both experiments. Ruffe can outcompete yellow perch when both species depend on a limited benthic food resource. Thus there is reason for concern for the ecological effects of ruffe if they expand their range into Lake Erie or North American inland lakes that contain yellow perch. View Full-Text
Keywords: interference competition; exploitative competition; invasive species; ruffe; yellow perch; growth; diet interference competition; exploitative competition; invasive species; ruffe; yellow perch; growth; diet
►▼ Show Figures 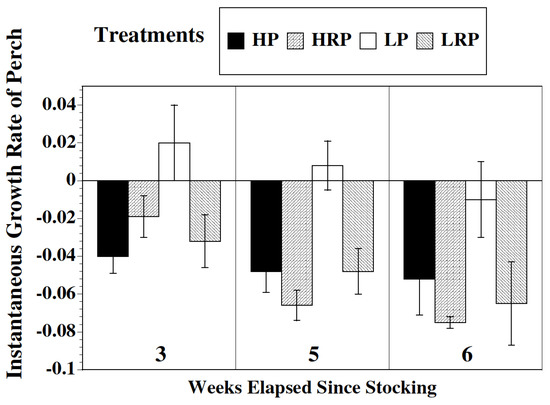