SARS–CoV–2 and Food—How Confident Are We about Them?
Previous Article in Journal

Clinical Failure and Emergence of Resistance during Third Generation Cephalosporin Therapy for Enterobacter spp. Infection: Is the Risk Overestimated? A Prospective Multicentric Study

Background: Clinical and microbiological guidelines recommend treating infections caused by Enterobacter spp. with cefepime or carbapenems. The main objective of this study was to assess the risk of clinical failure with third generation cephalosporin (3GC) therapy compared to other β-lactams for infections caused by Enterobacter spp. Our secondary objective was to evaluate the risk of emergence of resistance during therapy. Methods: We conducted a prospective observational study in seven French hospitals over an 18-month period including all patients with a pulmonary and/or bloodstream infection due to Enterobacter spp. susceptible to 3GC. Results: Seventy-four patients were included in our study. Among them, 26 (35%) received a 3GC as a first-line treatment, and clinical improvements were observed for 13/21 (62%) of them. Four (5%) cases of emergence of 3GC resistance were observed during therapy including one in the 3GC group. 3GC therapy can be safely used as first-line therapy especially for non-severe patients suffering from pulmonary or bloodstream infections due to Enterobacter spp. Conclusions: Emergence of 3GC resistance remains a rare event, and there is a lack of evidence of the benefit of last-line antibiotics therapies. View Full-Text
Keywords: AmpC producing Enterobacteriaceae; cefepime; piperacilline/tazobactam; third generation cephalosporin AmpC producing Enterobacteriaceae; cefepime; piperacilline/tazobactam; third generation cephalosporin
►▼ Show Figures 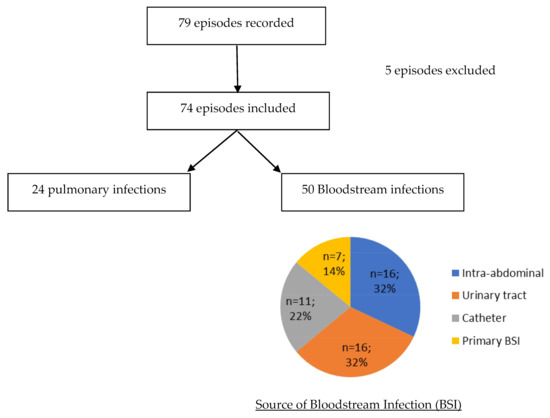