On 22 April 2015, the Calbuco volcano in Chile (Lat: 41.33S, Long: 72.62W) erupted after 43 years of inactivity followed by a great amount of aerosol injection into the atmosphere. The pyroclastic material dispersed into the atmosphere posed a potential threat to aviation traffic and air quality over affected a large area. The plumes and debris spread from its location to Patagonian and Pampean regions, reaching the Atlantic and Pacific Oceans and neighboring countries, such as Argentina, Brazil and Uruguay, driven by the westerly winds at these latitudes. The presence of volcanic aerosol layers could be identified promptly at the proximities of Calbuco and afterwards by remote sensing using satellites and lidars in the path of the dispersed aerosols. The Cloud-Aerosol Lidar and Pathfinder Satellite Observations (CALIPSO), Moderate Resolution Imaging Spectroradiometer (MODIS) on board of AQUA/TERRA satellites and Ozone Mapping and Profiler Suite (OMPS) on board of Suomi National Polar-orbiting Partnership (Suomi NPP) satellite were the space platforms used to track the injected layers and a multi-channel lidar system from Latin America Lidar Network (LALINET) SPU Lidar station in South America allowed us to get the spatial and temporal distribution of Calbuco ashes after its occurrence. The SPU lidar stations co-located Aerosol Robotic Network (AERONET) sunphotometers to help in the optical characterization. Here, we present the volcanic layer transported over São Paulo area and the detection of aerosol plume between 18 and 20 km. The path traveled by the volcanic aerosol to reach the Metropolitan Area of São Paulo (MASP) was tracked by CALIPSO and the aerosol optical and geometrical properties were retrieved at some points to monitor the plume evolution. Total attenuated backscatter profile at 532 nm obtained by CALIPSO revealed the height range extension of the aerosol plume between 18 and 20 km and are in agreement with SPU lidar range corrected signal at 532 nm. The daily evolution of Aerosol Optical Depth (AOD) at 532 and 355 nm, retrieved from AERONET sunphotometer, showed a substantial increasing on 27 April, the day of the volcanic plume detection at Metropolitan Area of São Paulo (MASP), achieving values of and at 355 and 532 nm, respectively. AERONET aerosol size distribution was dominated by fine mode aerosol over coarse mode, especially on 27 and 28 April. The space and time coincident aerosol extinction profiles from SPU lidar station and OMPS LP from the Calbuco eruption conducted on 27 April agreed on the double layer structure. The main objective of this study was the application of the transmittance method, using the Platt formalism, to calculate the optical and physical properties of volcanic plume, i.e., aerosol bottom and top altitude, the aerosol optical depth and lidar ratio. The aerosol plume was detected between 18 and 19.3 km, with AOD value of 0.159 at 532 nm and Ånsgtröm exponent of . The lidar ratio retrieved was sr and sr at 532 and 355 nm, respectively. Considering the values of these parameters, the Calbuco volcanic aerosol layers could be classified as sulfates with some ash type. View Full-Text
Keywords: volcanic ash; Calbuco; Lidar; CALIPSO; MODIS; AERONET; LALINET volcanic ash; Calbuco; Lidar; CALIPSO; MODIS; AERONET; LALINET
►▼ Show Figures 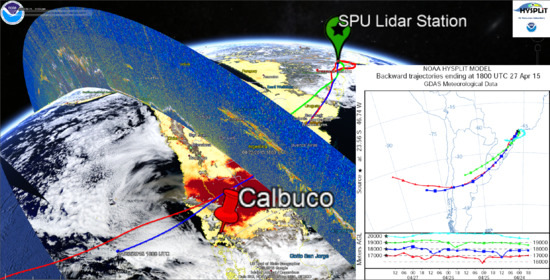