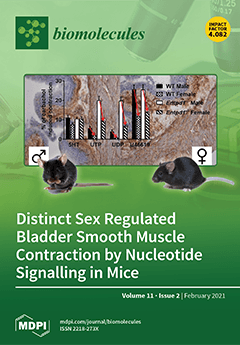 Cover Story (view full-size image): Smooth muscle cells (SMCs) and innervating nerves release nucleotides which activate specific P2 receptors and which may modulate contraction. In this work, we observed the involvement of several nucleotide receptors in smooth muscle contraction in mice bladder whose activity was modulated by NTPDase1 that we identified as the major ectonucleotidase at the surface of bladder SMCs by enzyme histochemistry and immunohistochemistry. Ex vivo, contraction was enhanced in NTPDase1-deficient (Entpd1-/-) bladder strips. Male bladders responded more strongly to UDP and UTP, suggesting the implication of the P2Y6 receptor, which was confirmed with P2Y6-deficient (P2ry6−/−) bladders. Interestingly, contractions elicited by UDP, UTP, and the thromboxane analogue U46619 were reduced in female bladders indicating differential contractions in male and female bladders. View this paper.
Previous Issue
Volume 11, January
Next Issue
Volume 11, March
We use cookies on our website to ensure you get the best experience. Read more about our cookies here.
Accept
We have just recently launched a new version of our website. Help us to further improve by taking part in this short 5 minute survey here. here.
Never show this again